Here we are 14 years into the new millennium. It’s hard to believe. Some parkeologists weren’t even around when the planet’s odometer rolled over. If you had asked Millennium Me what he remembered about 14 years ago, he would have reminisced about the opening of Captain EO at Epcot, or that exciting announcement about the Disney MGM Studios. Maybe he would have been proud at how recent CEO Michael Eisner was transforming the company.

If you’re old enough to remember, the coming of the Year 2000 (slickly marketed as Y2K) was a doomsday proposition. Computer systems around the world–unable to comprehend a time in which we might leave the 1900s–had to be updated for the possibility of dates with a 4-digit year. And if we missed the deadline, our nuclear submarines would inadvertently launch at Russia, whose own crumbling infrastructure would fire back, and the world would end. I was a software developer in Columbus, OH during the build-up to Y2K, and I remember being oncall for New Year’s Eve, ready to spring into action at a moment’s notice when our systems failed (it was never explained to me how my pager would still be working–and don’t bother asking what a pager is).

But of course, Y2K came and went, and the world breathed a sigh of relief, thankful that no disaster had occurred. 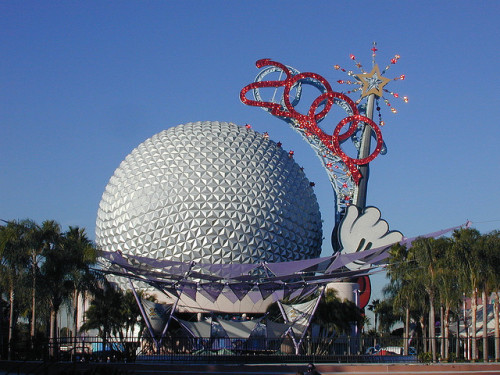 Oh, I beg to differ (photo courtesy of Flickr)

Disney, of course, structured a big marketing promotion around the possibility of nuclear holocaust. It was called the Millennium Celebration, and appropriately enough, it was based out of a theme park called Epcot. The name of this park had recently been shorted from Epcot ’95 a few years earlier, since guide map printers had never accounted for the possibility of a 4-digit year.

The infamous Spaceship Earth Wand may have been the most noticeable change for the celebration (Disney was in the midst of an especially dark period of horrendously ugly celebration icons, that began with the Castle Cake and continued through the Sorcerer’s Hat). But the wand wasn’t the only feature.

Y2K gave us the Millennium Village, a perma-temporary structure between Canada and the United Kingdom, which featured among other things, gigantic bathrooms, a Swedish exhibit in which you crawled through seasonal eggs (no idea why), and a simulator ride based on Jerusalem. The structure–visible from several prominent spots around the World Showcase lagoon–stuck out like a sore thumb and drew the scorn of many park fans–who all stopped complaining when Disney rolled out the colossal Soarin’ show building just to spite them.

Also as part of the Millennium Celebration, World Showcase received the Tapestry of Nations parade, a truly bizarre bit of artistry that performed twice nightly around the lagoon. The parade may have looked strange, but at least it had catchy music (we even called it out as some of the best park music of all time).

And we also received a new version of IllumiNations (full name: IllumiNations 2000: Reflections of Earth). It came complete with the world’s first large-screen LED globe, and also is responsible for the ring of giant torches that currently grace the lagoon.

Of all these changes, only IllumiNations: Reflections of Earth (minus the “2000”) is still around 14 years later. The wand was thankfully dismantled after a (too-long) run of 7 years (I fondly refer to its demolition as my gift for the Year of a Million Dreams). Tapestry of Nations only lasted a couple seasons. The Millennium Village (now called the Millennium Pavilion) is still there, but is only used as a private meeting space. Also this is kind of cool: Disney’s own website continues to host some very dated looking pages from the Millennium Celebration, and it’s kind of fun to revisit these and plan a vacation around such perks as “Leave a Legacy” and “Pin Trading Central.”

There’s something familiar about those zeroes…

Y2K came with a few blunders, but I always thought Disney did a good job with the logo. The three zeroes tied in nicely with a certain mouse head shape. Year 2000 merchandise lined the shelves all over Walt Disney World, proving that Epcot didn’t have a stranglehold on the Millennium Celebration. It’s interesting that all the big offerings were centered around Epcot, however. They would recycle this “home base” idea for the 100 Years of Magic campaign in 2001, with the Disney MGM Studios serving as the center point. But it does make me wonder about other perks or gimmicks in the other parks.

For instance, I have very vague memories of some sort of special parking space at the various theme parks. In my mind, this is tied to the 100 Years of Magic (2001), or maybe the Year of a Million Dreams (2006). But it possibly originated with the Millennium.

When I first moved down to Florida from Ohio in 2005, I spent an insane amount of time at the parks. That hasn’t really changed, of course, but this was a chance for me to soak up the atmosphere on a daily basis, rather than one or two weeks a year I had when I lived in the Midwest. The genesis for Parkeology came out of these trips. I would get home from work and head out to the parks for the evening. I started visiting on my lunch breaks to check out the progress of Everest or the Seas with Nemo. I lost 10 pounds in my first month just from all the walking.

I remember being in Animal Kingdom’s parking lot one sunny afternoon and spotting the Millennium logo on the ground. It had been blacked over by 2005, of course, and probably just looked like a stray dribble of tar to anyone who happened to park in that row. I thought it was cool at the time, but continued on into the park. A certain rollercoaster was getting ready to open.

In the years since, I’ve thought about that parking spot a few times. I never took a picture of it (this was still before my phone had a camera), and I wouldn’t have had anyone to share it with anyway, because literally nobody in my circle of friends would have cared (and probably would have stopped liking me for taking pictures of blacked out marketing logos in parking lots).

I never went back looking for it, because have you seen Animal Kingdom’s lot? It’s huge. Even I’m not insane enough to go wandering up and down the aisles looking for something that’s hard to spot even when you’re standing right next to it. But as fate would have it, I happened to visit Animal Kingdom the other day…

They parked me in Dinosaur 38, and as I returned to my car after a day at the park, the logo caught my eye again. It’s near the beginning of the row, but not the very first spot. A once-proud Millennium logo, slowly being lost to the vestiges of time. Here now is probably the internet’s first picture of a blacked-out bit of parking space paint. 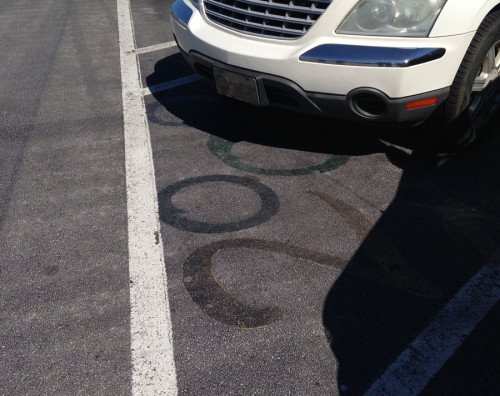 What makes it even cooler this time around is that it has been so long, even the black-out paint is starting to wear thin, allowing the original bright colors of the logo to start showing through again. You can see the yellow of the “2”, the blue in the ears, the green in the Mickey head. Savor it while you can. Who knows when they’ll decide to repave this section of the lot? This is now officially my favorite parking spot at the theme parks. I wonder if they’ll let me request it.

I’m still not sure why this spot was special. My memory has failed me (Millennium Me would be disappointed). I suspect this is simply the 2000th spot in the Animal Kingdom parking lot, and somebody thought it would be cute to use that logo. There’s certainly nothing overtly attractive about the space. Like I said, it’s not close the to front. But for now, it’s there, and you should all run right out and find it. Avatarland doesn’t open for a few more years anyway, so what else do you have to do?

10 thoughts on “Dinosaur 38 and the New Millennium”