I ranted recently about the new Journey Into Imagination (recently?  It seems I rant incessantly).  Disney seems to believe that the proper way to assuage upset fans is to take a favorite character, crank up his most annoying personality traits to the nth degree, and bombard visitors with him at every turn.

The original Figment was effortlessly charming.  He was like those Harry Potter kids:  Impish, naive, and tolerable in small doses.  He appears far less in the original ride than we remember, and he has way fewer lines of dialogue than Dreamfinder, who is an absolute blowhard.

There are great stretches of the ride where Figment doesn’t utter a word.  We might see him holding a paint bucket of rainbow colors, or holding back a scary book of monsters, but he’s certainly not sniffing our armpits, screeching over train sirens, or farting in our face.

If you look close enough, you can see some of the holdovers from the original ride:  Figment in an astronaut suit, Figment in a beret, Figment hobbling James Caan’s ankles (that last one might have been wishful dreaming on my part).  But only recently did I realize that there’s an entire segment of the original ride still intact.

Okay, it’s a film segment, so that’s cheating.  But it’s there, playing in a loop exactly as it did in 1982.  In the original ride, it occurred in the “Science” room.  If you remember anything about this room, it’s Dreamfinder saying “What about science … science … science …?” as if he were testing out the Grand Canyon.  It’s basically a series of film clips, showing scientific things like time-lapse photosynthesis, time-lapse ice crystalization, and time-lapse decomposition of Captain EO’s face. As you exit the room, there were several clips of Figment violating the rules of science.  In one, he bounces around in zero gravity.  In another, he expands at an enormous rate until he is squished up inside a tiny box, foreshadowing the eventual replacement of Horizons with Mission: Space. 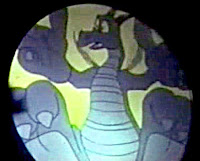 The ballooning Figment clip is still in the ride for all to see.  It’s playing on the television set in the Upside Down House.  Figment is watching this clip of himself, holding a bucket of popcorn, suggesting a strange brand of narcissism not seen outside of the Sheen household.  It’s also strange that they went with the expanding Figment clip instead of the anti-gravity clip, since it is an Upside Down House, but maybe there’s both and I only caught the one. 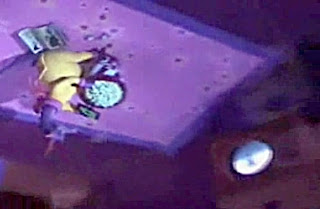 Anyway, next time you ride, be sure to look at it.  If you squint your eyes just right and repeat the word “Science” several times in an echoey tone, you might just imagine you’re back on the original ride.  And maybe it will be enough to help you survive this image: