If there is one thing we love around the Parkeology campus it’s Oscar time.  Shane really goes all out with the parties and predictions.  Not only does he demand to see every single nominated film (yes, even the foreign shorts) but he also dresses up as the nominated actors (and actresses) characters, one a day each day leading up to the big event.  Today he happens to be Michelle Williams as Marilyn Monroe and I must say he is STUNNING.
We can all agree that Shane can pull off wearing pink; of course some thoughts are just so clear and plain that you would imagine EVERYONE must agree.  For example the first time you go to Islands of Adventure you make fun of the Hulk tracks, or the first time you eat corn on the cob you think “I need a plastic unicorn head to help me out here”. These are the basics, the universal (no pun intended) truths.
Likewise there are plainly obvious casting choices for movies… Meryl Streep for anytime you need, I don’t know…. a woman. Of course you can’t go wrong with Nicholas Cage for anytime you need subtle, nuanced acting.
(NSFW due to language, lots of it, seriously)
When it comes time for actors to portray real life people things get trickier.  Do you hire a great actor who maybe does not look exactly like the person they are portraying or do you go with physical resemblance first.
Anthony Hopkins may not have been the first guy to jump to mind when you think “Nixon” yet his acting ability pulled it off, even without prosthetics. Frank Langella is perhaps a foot taller than Nixon and looks nothing like him yet again in “Frost / Nixon” we bought it.  Philip Seymour Hoffman more or less morphed into Capote for the 2005 film of the same name and the skinny little Fresh Prince of Bel Air somehow managed to pump up and convincingly play Muhammad Ali… there is not a single formula for this.
Then there are the times when miraculously you can have the best of both worlds, you can have your cake and eat it to.  Such is the case with the yet uncast, yet uncreated, yet unwritten, yet unthought-of Walt Disney movie. Why we have yet to have a theatrical movie about the life of Walt Disney I am not really sure… He is one on the twentieth centuries most creative and innovative figures.  He led an interesting and exciting life and the impact of his creations are still felt to this day.  He also has legions of devoted fans… seems pretty obvious that there should be a Disney movie… perhaps put out by the Walt Disney Company or perhaps NOT put out by them… but it should exist.  One day it will, and if that happens somewhat soon the incredibly obvious and clear choice is an actor who is getting a lot of buzz right now, Mr. Jean Dujardin.
When we took the office field trip to see his film “The Artist”, one of the years most talked about movies, I was struck by a few thoughts.  First of all it was a shame but some sort of problem at our theater caused most of the film to be without dialogue and completely void of color to boot.  Despite the technical problems Dujardin’s performance stood out. Secondly I could not help but to think that Disney’s doppelganger was dancing and prancing across the screen.
He’s nominated for an Oscar… the guy can act… but just look at these pictures… it is like he and Disney is the same freaking guy!  Honestly I am not sure that I have ever seen an actor who looks so much like the person he would portray. Yea, yea…. he’s French, he has an accent, but he is also a professional actor who I am sure could learn to speak in Disney’s Midwestern drawl. 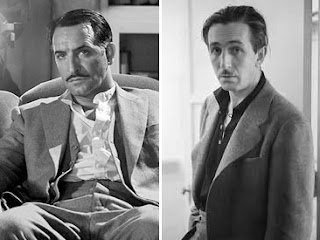 Take from it what you will but why have we not seen something this obvious posted all over the place?  Why is Ain’t It Cool News not running a campaign to make this happen?  Why is it that Parkeology has to blaze the trail… well that is what we do I guess. But honestly when this happens you know who said it first, and you know that it is freaky how much these guys look alike… and you know you want to see it.  Maybe a whole series of movies:  Walt Disney and the Locomotive of Destiny, Walt Disney and the Orange Grove of Fate, Walt Disney and the Chamber of Frost, I don’t know, Walt Disney and anything Lucas would think of in his sleep… it works.
Lets try to get this to happen… I’d love to see Shane dressed up as Walt Disney for a reason for once, not simply because he happens to dress as him most of the year anyway.  I’ll be rooting for Mr. Dujardin at this years Academy Awards and hoping that Iger or someone sees what is so clear to the rest of.  When you give us credit in the titles just make sure you spell Parkeology correctly, thanks.