I mean this is no contest, right?  If it was Russell vs Idle in a celebrity death cage match, you go with the guy who played Snake Plissken and Wyatt Earp, not Monty Python’s Sir Robin.  And when you have a train wreck like the current incarnation of Journey Into Imagination, you want the guy with Goldie Hawn on his arm, not somebody who is still cursing the agent that got him into this mess.


There was much public uproar over Disney’s first replacement to the wonderful original show, which dropped the lovable Dreamfinder and Figment characters, while at the same time insulted its guests’ ability for creative thought. In Round 2, Disney decided to vastly improve their ride by shoving Figment back in.  In the process, they turned Epcot’s most endearing character into one massive annoyance.

You can tell they thought they had a winner with their “Five Senses” premise.  And you can also tell the exact moment when they realized that Touch and Taste labs were just lawsuits waiting to happen.  Aside from an okay upside-down house, the so-called Imagination Institute that you are travelling through is full of unimaginative props and sets, like a sound-proof room and a hallway with a water cooler.  It also has a computer room, with a tell-tale sign in the window. 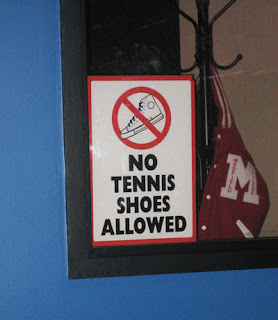 There’s a pair of sneakers outside the door, and inside you can see the red letterman’s jacket with a block M sewn onto the front.  All of this is evidence that at least one Imagineer recognized that this ride desperately needed a dose of good old fashioned Kurt Russell kick-buttery.


The Computer Wore Tennis Shoes is a 1969 Disney flick starring Russell as a college student (at Medfield, the fictional Disney college that appears in many films), who somehow mindmelds with a computer and becomes almost like a computer himself.  The film is silly, pedestrian, and utterly forgettable.  But the mere fact that it’s so obscure makes it all the more amazing that the Imagination ride has a tribute to it.  As a Disney fan, it’s much more of a thrill to spot this than to listen to anything Eric Idle and Figment have to say. 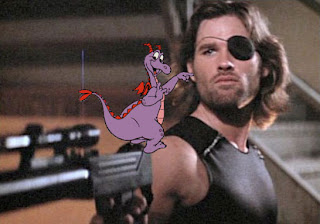