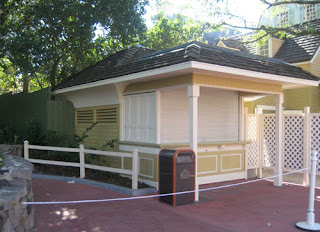 Hidden away in a secluded area behind Liberty Square is the ruin of a small venue known as the Fife and Drum Snack Bar.  It closed shop right around the time the Constitution was ratified, and once sold refreshing beverages to parched Liberty Square guests who didn’t know that the Hall of Presidents had air conditioning.

It’s not hard to see why it shut down.  There is literally nothing else around it, and until the bridge to Adventureland opened in the late 90s, the only way to reach it was by passing through a silver shop or a perfumerie (neither of which suggest ice-cold syrupy goodness).  It’s like opening a lemonade stand in your backyard in the hopes that somebody will happen by.

The structure looks the same as on the day it opened, minus only the signage.  If your mouth is watering just thinking about fifes and drums, well, that’s to be expected.  Nothing screams “killer restaurant concept” like a tiny flute and snares.  Why else would this have popped up in World Showcase within the past few years? 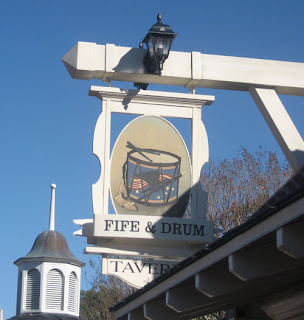