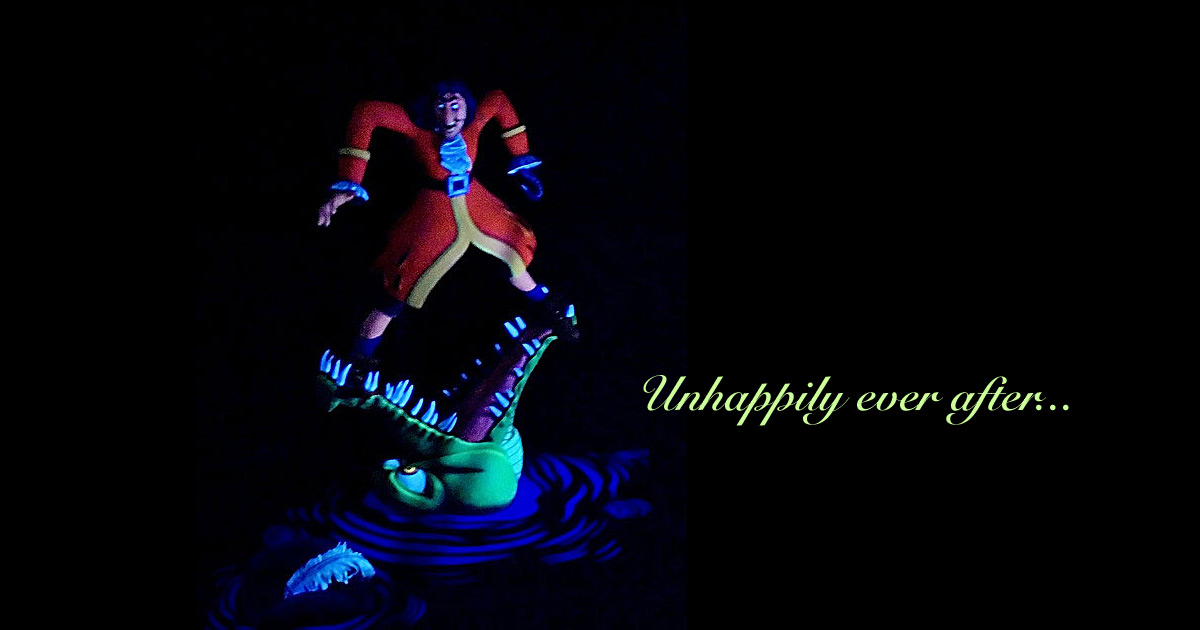 “Fantasyland is dedicated to the young and the young-at-heart, for they are most susceptible to nightmares. All that lurks here is graphic death, horror, and eternal damnation. Abandon all hope, ye who enter.”

You want happily ever after? Go to Universal or something. We’re peddling unhappy endings here. The smorgasbord of original Fantasyland dark rides is one giant buffet of tragedy — a week’s worth of tragic French cinema crammed into a few acres of carnage. Here is life at its most stark and bleak.

It’s unsettling just how many of these classic rides end on such a somber note, especially in what is considered the “kiddy land” of Disney theme parks. There are some very grown-up lessons to be learned here.

As your mother told you time and again, life is not fair — all evidence of medieval tournament tents to the contrary.

Snow White’s Adventures is a Fantasyland dark ride standard, appearing at most of the Magic Kingdoms around the world. Disney World’s version was evicted a few years ago to make way for the bland Princess Fairy Tale Hall. Even the version that it replaced was somewhat tame, with a dancing frog and a waving Dopey to set things right. That ride appeared in 1994.

But make no mistake, the original 1971 dark ride was terrifying.

There’s a reason they eventually called it Snow White’s Scary Adventures. A cackling hag pursues you through an endless black labyrinth, featuring more jump scares than the latest version of The Conjuring. And all that terror might be forgiven if the ride ever once acknowledged that true love always wins.

But there is no love to be found.

Famously, Snow White herself never appeared, leaving the audience in the role of the tortured heroine. There is no prince waiting to save us with love’s first kiss. Even the Seven Dwarfs abandon us in the end.

At the conclusion of the ride, our mine car approaches a scorched cliff, with the Witch looming over us, tilting a diamond the size of a Volkswagon towards our car. If she succeeds, it would kill us in an instant — bashing in our skulls and splattering our internal organs all over the rain-slicked mountainside.

Which is exactly what happened.

The very last room of the ride was meant to represent our collision with this titanic boulder — a blinding explosion of thousand strobing starbursts. There’s no glass coffin waiting for us at the end because they’d still be picking up the bloody, mangled pieces.

Just the unload area and a calm voice telling us to “step out to your left.”

Most of Disneyland’s Alice in Wonderland dark ride is just as incomprehensible as the movie. The Queen of Hearts may scream “Off with your heads!” but just at that moment, we wake up and realize it was all a dream. Our caterpillar crashes through the doors into broad daylight and the ride is over.

We are outside, yes, but somehow on the roof of the building. There’s a slow, meandering crawl down a ramp and we re-enter the ride for one last scene.

It’s the Mad Tea Party, with singing teapots and crazy animals. Hey, it’s great in the movie, so I’m glad they decided to include it in the ride.

At this point, the Mad Hatter takes a page out of the 1987 Glenn Close thriller and kills the lovable bunny.

Now the ride is over.

You think I’m joking? This is exactly what is implied by the last scene in the ride, which shows the White Rabbit quivering in fear next to a giant Unbirthday Cake. Jammed into the center of the cake is the biggest stick of dynamite you’ve ever seen. And the fuse is lit. And it has almost burned down.

During the more recent refurbishment, projection effects were added to imply that the dynamite is actually a roman candle and it’s all just fireworks, ha ha.

But the White Rabbit is dead. If you had the misfortune to cross the Mad Hatter, then there’s probably a rabbit stew boiling on your stove as we speak.

Peter Pan’s Flight is a faithful retelling of the family film, with one big difference.

In the movie, Pan and the children fly back to London, leaving Captain Hook with the crocodile. While the villain is clearly on the run, the movie leaves Neverland to focus on the joyous reuniting of the Darling family.

In the Fantasyland dark ride, we cut away from the happy children to learn Hook’s fate. The last scene in the ride shows him literally in the jaws of the prehistoric monster, seconds away from being devoured while the only remaining responsible adult rows away in the wrong direction.

Now you know what it’s like to grow up.

Speeding May Cost You Your Eternal Soul

You knew this was coming. It’s absolutely the bleakest ending possible — in any story ever. After leading a sinful life and dying a violent death, your soul awakens to discover that there is an afterlife after all.

And you’re headed to the wrong one.

What was Mr. Toad’s real sin? Where did he go wrong? In the movie, he stole a car, broke a few traffic laws, and caused his friends no small amount of heartburn.

On the other hand, he also had a psychological condition and seemed genuinely remorseful. Does he really deserve a one-way ticket to hell, to be tormented by cackling devils?

Disneyland certainly thinks so. Mr. Toad’s Wild Ride has you smashing through a city in your boosted vehicle, careening onto railroad tracks and plowing headlong into a locomotive. It’s the Snow White ending all over again — immediate, visceral death.

Mr. Toad’s Wild Ride simply takes it one step further by tossing you into a fiery abyss, reserved for the likes of Hitler, Stalin, and probably that Trump animatronic.

Have a magical day, kids.