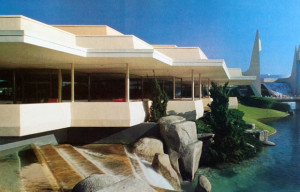 The people of Tomorrow just didn’t have time for decorating, what with flying to Mars every other day.

Now we live in a Stitched up Tomorrowland, where all the goodie 1970s futurism has been Monstered out of existence by a slew of animated Lightyears. Twenty years ago, Tom Morrow moved out and George Lucas aliens moved in.

New Tomorrowland, they called it.

Probably the worst thing about WDW46 was being called “middle-aged” by seemingly every news organization in the country. In my mind, middle-aged means a hair piece, an alcohol problem, and some kind of manufactured crisis involving a red sports car.

But no, really it means you spend too much time at Walt Disney World hunting down memories from your past, like the remnants of If You Had Wings.

You remember this one, right? A TV commercial for Eastern Airlines masquerading as a dark ride. Walt Dated World has a great introduction for you novices, but Widen Your World has a truly epic breakdown—even taking its name from the attraction’s lyrics.

The basic gimmick was that you rode past flat projection screens that were cleverly integrated into three dimensional sets. Waterfalls in Jamaica, flower boats in Mexico, straw markets in the Caribbean…

In other words, it was exactly like El Rio del Tiempo in Epcot—right down to the annoying theme song.

Your Omnimover would pan past these locales and you would think to yourself: If I had wings, I could totally fly to all these exotic locations. Wait a minute! Why do I need wings when I have Eastern Airlines?

Eventually Eastern lost its wings and Delta re-imagined the ride as Dreamflight (Wait a minute! Delta also has wings!). Then a certain double-chinned space ranger moved in and the ride lost all of its crass commercialism. 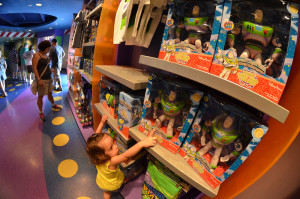 Now with the power of middle-aged nostalgia, we can recapture some of that bygone era. Hiding in Tomorrowland are three things that can jolt you back to a time when projected seagulls and haunting melodies introduced one of the quirkiest Disney attractions ever.

Listen to the Theme Song … Without Leaving the Park!

Someone over at Disney—probably Buddy Baker’s grandson—has an appreciation for the past. Even though If You Had Wings has been gone for almost 30 years, an instrumental version of the repetitive theme song can still be heard in the background music loop for Tomorrowland.

There are some real gems in the Tomorrowland background loop and If You Had Wings is one of them. Now is the Time from the original WDW incarnation of Carousel of Progress also makes an appearance.

The loop plays everywhere, but I’m most aware of it when sitting at a quiet table in Cosmic Ray’s, enjoying a quality Grade C Mostly-Beef burger served to me by a high school kid who does not know if there are any more napkins.

Unmask the Airplanes in Disguise

I have only one clear memory of If You Had Wings.

It was sort of a recurring motif. Most rooms would have a flock of three or four basic white gull shapes that would fly over a wall in the background, to give the static sets a more kinetic feeling.

When Delta Dreamflight took over, I remember a silhouette of a flying plane instead of the gulls. There were also airplanes in If You Had Wings (almost as if the attraction was sponsored by an airline). The plane was not animated at all. It was like a slide projector on a turntable, which would pan the wall to give the illusion of flying.

If you ride Buzz Lightyear Space Ranger Spin today, you will not see gulls or airplanes. However, in the very last room right before you exit the ride, you will encounter a scene with Zurg caught in a claw. 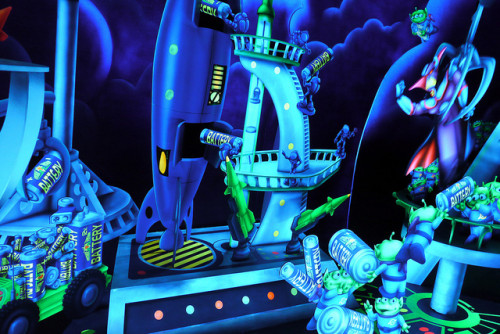 Pay attention and you’ll see a very bizarre projection of Buzz riding in one of the ride vehicles. It will zip over the background.

I have no way of proving this, but it is such a weird detail and very static—exactly like those airplanes. I feel in my heart that this is one of the very same If You Had Wings airplane effects. Or maybe it’s just a nod to the past.

View the Ride From the PeopleMover

The view of Buzz is just one room—essentially the second room of targets, with the volcano in the background. When you’re riding Buzz Lightyear, you can usually visualize the PeopleMover track (hint: any time you are going in a straight line with a low ceiling, you are directly under the track).

However, when If You Had Wings was in operation, the WEDWay PeopleMover looked in on the ride in three separate locations, finishing up just before the “Speed Tunnel” scene (which is now the “You Won’t Score Points By Shooting at Bad CGI Renderings” scene).

The best part is that the windows into those other locations still exist and are plainly visible from the PeopleMover today. Yes, with glass and everything. The tunnel is still dark and the windows are blacked out, but there’s enough ambient light to spot them if you’re looking for them.

Yes, only a parkeologist would get nostalgic about something as obscure as a dark window. But you have to admit, those windows are a piece of history.