They say the eyes are the windows to the soul. I’m sure this must be true. I like to imagine my soul looking out on the world through the twin portholes above my nose in the corner penthouse of my head. I draw the drapes when it’s bedtime. Install hurricane shutters whenever I’m working with power tools. Hire little guys in white uniforms to dangle from my forehead and give my eyes a good cleaning with a saline rinse and a squeegee every so often, as if I am a giant walking skyscraper who likes to run metaphors into the ground.

If Disney World has a soul, it has to be the classic attractions. More specifically, the rides. We love the rides. They are the reason we go. Disney thinks we go because of the dining and the golf or whatever, but no, it’s the rides.

We call things rides that aren’t even rides (“Next let’s go ride Hall of Presidents”). We have favorite rides, best parts of rides, memories of past rides (Mansion, the catapult launch, two-track Toad).

We’ve turned the concept of the ride into something to be conquered. “I rode the Tea Cups twelve times!” or “These idiots are trying to ride all 47 rides at WDW in a single day!” (well, I guess it’s 46 now. Thanks for nothing, Maelstrom and Backlot Tour).

Rides have a mystique about them. You line up, you get in the car, and then your adventure into the movies is about to begin. You careen around in darkness or through amazing landscapes. You grip the safety harness through the high-speed loop. Scream when the witch pops out. Laugh at the goat with the stick of dynamite.

Sometimes we just soak it all in — the sounds of the Smuggler’s Cave, that herd of wildebeest on the hill, Michael Eisner hitting a golf ball. Rides by their very definition transport us.

And then we’re back to the most dangerous part of our journey: The return to civilization and my attempt to dock this boat.

Rides are active: Stow your belongings in the underseat compartment. Step carefully onto the moving walkway. Pull on the yellow strap, but do NOT pull down on the safety bar, please. I will lower that for you.

Rides are so cool, that there are rides within Disney World whose primary appeal is to look in on other rides. If eyes are the window to the soul, then these five windows provide some of the best glimpses of the soul of Walt Disney World. It’s a chance to observe a ride in its natural habitat — not staged observation decks, but almost hidden peepholes. Many times, the people on the ride don’t even know they’re being watched. We get a kick out of it.

And that’s what makes these windows almost as popular as the bananas growing on both sides of the boat.

There’s no actual pane of glass, no etched opening that would denote a literal window. But the diners at the San Angel Inn in Epcot’s Mexico pavilion are practically a show scene all unto themselves for the Gran Fiesta Tour.

As the boat leaves the loading zone, it travels into the Mexican night, winding its way past an ancient pyramid on the left, heading for a tunnel into the jungle. On the right is a festive Mexican village, with a restaurant right on the waterfront. The lighting is dim (it is night, after all), and the tables are far enough away that everything is shrouded in shadow. But those are real people eating lunch, and if they have the prime tables, they spend a lot of time watching the boats go by. 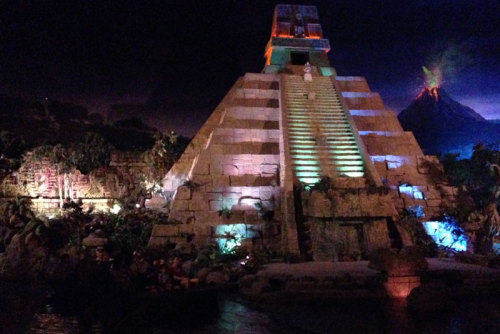 Nothing helps you work up an appetite like a temple of human sacrifice.

The idea is not original to Epcot. Disneyland was doing this with the Blue Bayou and Pirates of the Caribbean for more than a decade before Mexico opened (the original boat ride was called El Rio del Tiempo). But it is just as effective in Mexico as it is in New Orleans Square. Unlike Pirates of the Caribbean, where the most exciting show scenes are tucked away beyond the waterfalls, San Angel Inn diners are treated to the very best scene of the Gran Fiesta Tour. The pyramid is a masterpiece, and the quiet boats and distant drums perfectly set the stage for an exotic meal. They got lucky. A table overlooking Donald Duck’s cliff-diving scene probably wouldn’t have the same allure.

Here we have a true window. As the train nears its Frontierland Station, it passes into a tunnel through the heart of Splash Mountain, and on the right, the wall opens up to reveal a glimpse down into the Zip-A-Dee-Doo-Dah finale of the log ride.

This is one of those cases where the casual rider is unaware that another ride might be passing through just overhead. You can technically see the railroad from the boats if you’re looking for it, but most people aren’t. They’re watching those singing chickens and the pig playing piano.

Unlike the San Angel Inn viewing, which shows you the start of the ride, this one shows you the end. Maybe the train needs some narration with a spoiler alert. This isn’t a lingering glimpse of Splash Mountain, since the train is moving, but it does provide an intriguing vantage point that the riders in the boats don’t get of the scene.

It’s also as close as Walt Disney World gets to having something like the Grand Canyon Diorama or Primeval World out at Disneyland. It’s presented in a very similar fashion, with large panes of glass on one side of the train–though the glimpse is way more abbreviated.

The PeopleMover is a ride that almost seems to have no purpose other than to showcase other rides. You’re circling the rooftops of the Tomorrowland, with the narration calling out the Carousel of Progress, the Laugh Floor, X-S Tech (oh wait). You do get a nice overhead look out at the Tomorrowland Speedway, but the highlight of the ride is when it bisects straight through the heart of Space Mountain.

The rollercoaster’s twin tracks flank the People Mover during the initial ascent. The rockets are pointed up, cranking past the satellite prop and the control tower, while the PeopleMover continues on its steady path. Occasionally, a rocket will careen by much closer to the TTA track. The image of passing through Space Mountain is so iconic that guide books continue to recommend first-time-Mountain-riders take a ride on the TTA first, to see if they think they can handle the thrills. 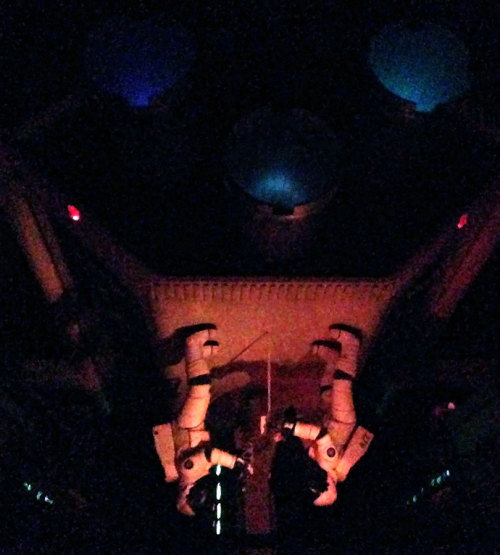 While Space Mountain is probably the highlight of the PeopleMover, it’s not finished offering up other windows. As it heads out of Space Mountain and around the Carousel of Progress, it gives a nice backdoor glimpse into sections of Buzz Lightyear Space Ranger Spin.

This is another prime example of people on the ride being totally unaware that they are being watched. The view from the PeopleMover into the Buzz Lightyear panorama is actually much more appealing than the ride-level view, since you can see the scope of the alien landscape more clearly (down inside the ride, it just looks like mass confusion). 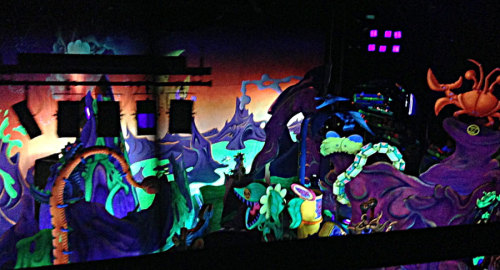 Ah, the very picture of clarity.

And something I’ve always been fascinated by are the rotating Z targets visible right outside the PeopleMover window–and which are often completely ignored in the ride itself. I always thought Disney should make those targets worth more.

The Garden Grill Rotates Past Scenes from Living With the Land

This is another Epcot dining experience, but unlike Mexico, the guests on Living With the Land are likely oblivious to the restaurant watching them like a great eye in the sky. 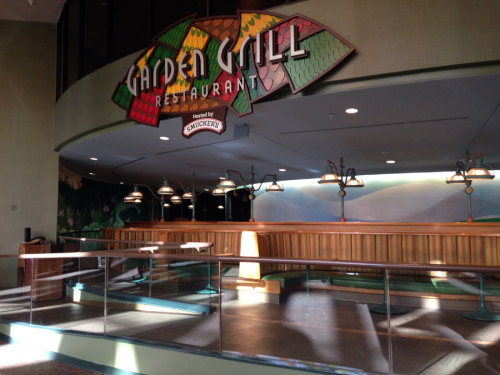 The Garden Grill is basically a giant lazy susan, slowly rotating throughout your meal. Beneath it, the canopied boats pass through dry deserts, humid rain forests, windy prairies. Eventually the boats veer off on their own course through the greenhouses, but diners in the Garden Grill are treated to the best themed parts of the ride, and at a leisurely pace. 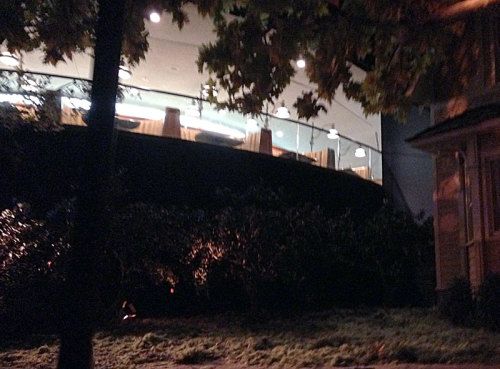 As an aside, remember when the Garden Grill was called The Good Turn? That name made much more sense, since it evoked the restaurant’s most distinctive feature. The Garden Grill just sounds bland (what do you grill from a garden anyway?)

Now my favorite window, which isn’t exactly hidden. It’s plainly visible from Small World as your boat exits the loading dock. Just a few panels of glass, behind which you’ll often see diners at Pinocchio Village Haus looking down at you. 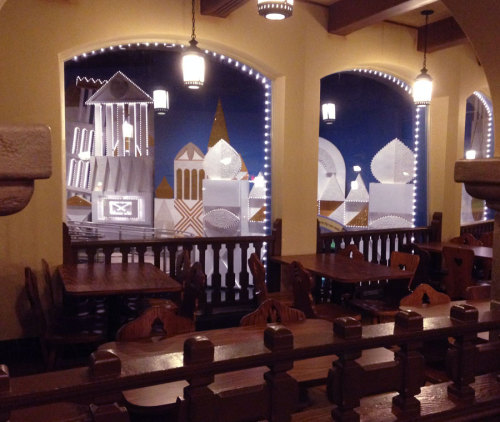 They should offer FastPass for these tables.

In some respects, my favorite window is also the most bland. No Zip-A-Dee-Doo-Dah finale, no laser targets or blasting spaceships. Not even a stoic mayan pyramid. Just brightly colored boats in a brightly lit loading zone, setting sail on the Happiest Cruise That Ever Sailed. 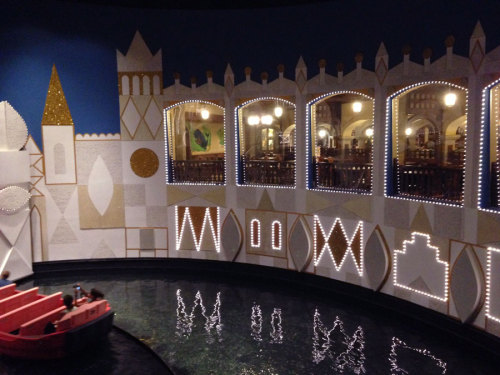 So bright. So happy.

I think my fondness for this window stems from childhood. Pinocchio Village Haus was the go-to restaurant of choice for my family–usually in the later hours of evening, when the sky had turned dark and the Magic Kingdom was twinkling with a thousand tiny lights. The Village Haus is a large restaurant, but only a few tables have this view. Here my brother and sisters and I could stare down at the ride beginning happily below us, take note of the short evening line, and get excited that while it might be dark now, the day wasn’t over yet.

That’s the power of rides.