Friday, November 7 will be a momentous day here at the Parkeology offices. You can probably guess why.

On that day, Big Hero 6 will be officially released into theaters, the 54th animated feature from Walt Disney Animation Studios.

There is perhaps nothing more synergistic than Disney animated features and theme parks. The parks are loaded with rides based on movies, restaurants based on movies, shops that sell merchandise from the movies, an entire attraction called “The Magic of Disney Animation” which is about the making of the movies. Without animation, there would be no Disneyland. Animation is the lifeblood of Disney parks. Animation and maybe also ice cream.

The 54 animated features are sort of like the 47 rides of Walt Disney World — something that can be methodically endured, conquered, and critiqued. Good, bad, all of the above — and in spite of all the classics, there is a surprising amount of bad on the list of 54.

For the first time in theme park history, somebody has decided to choose the absolute best park tie-in that ever existed for every animated feature. It’s something you didn’t even know you wanted, but now that it’s here, you will soon wonder how you ever lived without.

It’s going to take a few posts to get through all these. I will be going in descending order by release date. The older movies, by definition of them being older, have more options to choose from. So it will be more climactic to finish up with the original classics.

But first you have to suffer through…

Prepare to hug lifesize Baymax in a character greeting area heading to Disneyland! There’s also one heading to Hollywood Studios, but I give the edge to Disneyland, since it’s also repurposing the Captain EO theater into a preview theater. So there’s that.

See what I mean about anti-climactic? The movie isn’t even released yet! Until this movie becomes a mega-hit, we likely won’t see the closure of any classic Epcot dark rides so that we can get our own Big Hero 6 adventure. Speaking of which…

Sure, we have that new Epcot E-ticket on the way, but that’s a few years off. Over in Hollywood Studios, they just ran an entire summer promotion centered around Frozen, complete with cardboard Olafs, an ice skating rink, and soap bubbles on Hollywood Boulevard. We also got that hastily thrown-together Frozen Sing-Along in the Premiere Theater, which turned out to be a surprisingly engaging experience (eat your heart out, American Idol).

But the best Frozen tie-in is already history. The Frozen Fireworks show used as part of the Summer of Frozen Fun had its last performance in September. Those songs! Those fireworks! That giant Sorcerer’s Hat backdrop! The show will be missed. The hat not so much. 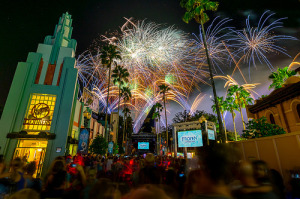 Ralph and Vanellope Von Schweetz had their own walk-around characters, but the coolest park tie-in for this genius video game tale came in the form of … a video game.

Fix-It Felix Junior arcade cabinets made appearances at Disneyland’s Starcade and Disney Quest, where you can still play them today. 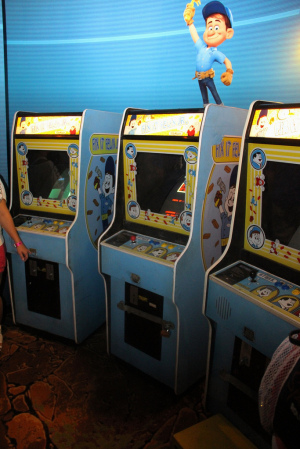 Thank God for character greeting areas, or some of these movies would really be scraping the bottom of the barrel. Of course Winnie the Pooh is all over the place in theme parks. For awhile, he was bigger than the princesses. But tie-ins for this somewhat forgotten feature in the Pooh pantheon were limited to the character greeting spot at the Magic of Disney Animation (recently home to Wreck-It Ralph, with Baymax landing soon).

Here we are five movies into the list and we’ve still yet to see a bonafide attraction, except maybe the Frozen fireworks. Tangled is not the movie to break that streak. But it is with a strange sense of delight that I get to put a restroom on the list. 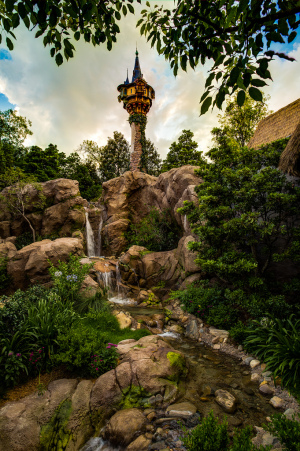 Tiana and Naveen got themselves a thematically appropriate riverboat show in New Orleans Square — Princess Tiana’s Showboat Jubilee — which is the pinnacle of their park achievement. The show didn’t last very long, but like many things in Disneyland, it made great use of existing park landmarks. The characters still pop up for greetings here and there, but the song-and-dance show still takes the cake.

Oh, Bolt. You left us too soon. The movie wasn’t a failure, but Bolt is practically non-existent in the parks, other than as a plush toy at the Emporium. Could that possibly be the best tie-in from the movie? A stuffed animal?

No, I won’t allow out. Bolt’s biggest impact is on his card for Sorcerers of the Magic Kingdom, the interactive game in Florida. Bolt’s power (like in the movie) is his Super Bark. Hold that card high, Bolt fans. You’ve precious little else to cling to. 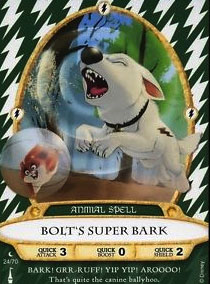 This honor goes to Bowler Hat Guy, who by now is actually a very rare character. He’s usually only out for special events like Marathons or Overnight Villain Parties. 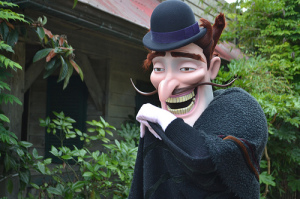 Screw it. I refuse to pick the short-lived walk-around Chicken Little and Abby Mallard characters, who like Bowler Hat Guy are special events only, nowadays. I don’t even like Chicken Little the movie.

It says something when the best park tie-in for the movie is the movie’s own promotional billboard. And that’s what I’m going with. They painted the side of the Playhouse Disney soundstage in Hollywood Studios to be a bright blue sky, and then painted a hexagonal tile that had fallen from it. A promotional mural. That’s the best you can do, Chicken Little. 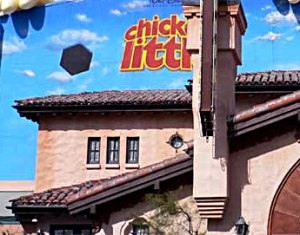 Shoot me now. The movies are getting dreadful, and the park tie-ins are getting worse. The best tie-ins to date have been a fireworks show and a character show. And this flick about three cows (one of whom is Roseanne Barr) is not likely to blaze any trails.

Judy Dench voiced another one of the cows. Can I call her Spaceship Earth narration a tie-in? Jennifer Tilly (the third cow) played Madame Leota in the Eddie Murphy Haunted Mansion movie. Can I use that?

Okay, fine. I guess I will have to go with the Little Patch of Heaven makeover that Disneyland’s Big Thunder Ranch received around the time the movie was out. I think it had cows. Because theming. 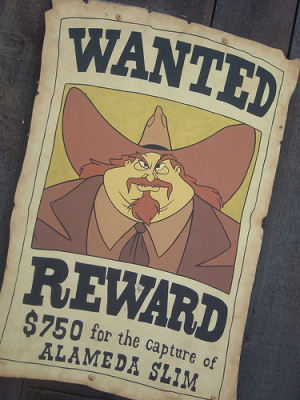 Brother Bear came out in 2003. Disney — who loves any story where someone turns into a bear to hilarious effect — figured they had a probable massive hit on their hands and promptly rethemed their Redwood Creek playground area of California Adventure into the Magic of Brother Bear, complete with totems, character greetings, and an amphitheater show.

Children everywhere rejoiced and quickly made it the most popular playground in that section of the San Francisco area of a forgotten theme park.

In 2009, Disney rethemed this playground around the Pixar movie Up, which is about a 70-year old man.

If that’s not the definition of a successful theme park tie-in, I don’t know what is. 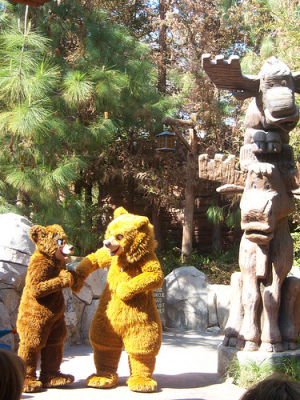 I’m going to be honest with you. This is the first one where I could literally think of nothing. I had to google, and even still, all I could turn up was a walk-around B.E.N. character in Discoveryland at Disneyland Paris. Kind of sad, since this movie is way better than Home on the Range and Brother Bear. 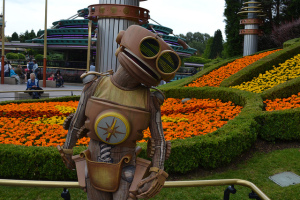 Finally! This is the first movie on our list with some real attractions to choose from! I know you are extremely excited. Let me temper your enthusiasm by reminding you that the two attractions in question are Stitch’s Great Escape in the Magic Kingdom and the Stitch version of Turtle Talk in Hong Kong Disneyland. 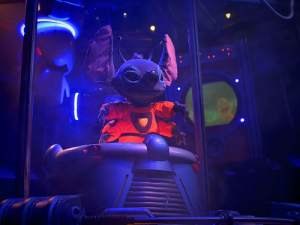 In 20,000 Leagues Under the Sea, your submarine passed through the lost city of Atlantis, whose tottering columns betrayed the hand of man. It was awesome.

Unfortunately, it had nothing to do with the animated feature.

I don’t know. I kind of hate this movie. So out of spite, the best park tribute is an article done by a wonderful website called parkeology. Which delightfully shows nothing remaining of Atlantis. Which is how it should be.

We end this first batch of movies not with a bang, but a whimper. Scraping the bottom of the barrel for yet another foam-head. This time, it’s everyone’s favorite mimbo, who had his own meet-and-greet outside the Animation building at Disney’s California Adventure.

Ladies and gentlemen, I give you… Kronk. The Eighth Wonder of the World. 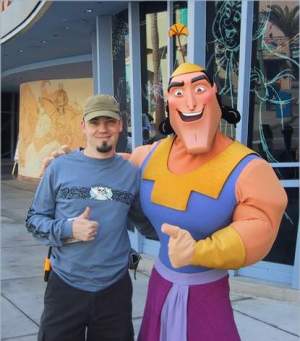 So yeah, you can’t wait for the rest of these, right? I mean, we covered 14 movies and the biggest full-fledged attraction we had to offer was the reviled replacement for Alien Encounter. In the process, we got rethemed playgrounds, petting zoos, a fireworks show, a trading card, a restroom, a billboard, seasonal entertainment, a video game, and 5 character greeting areas. This is scintillating stuff.

Is it any wonder Disney gets a bad rap for failing to capitalize on its recent movies?

In the next round, we’ll turn the page back to the 1990s. I guarantee you’ll remember some of those movies. The question is: Will you remember anything they spawned in the parks?