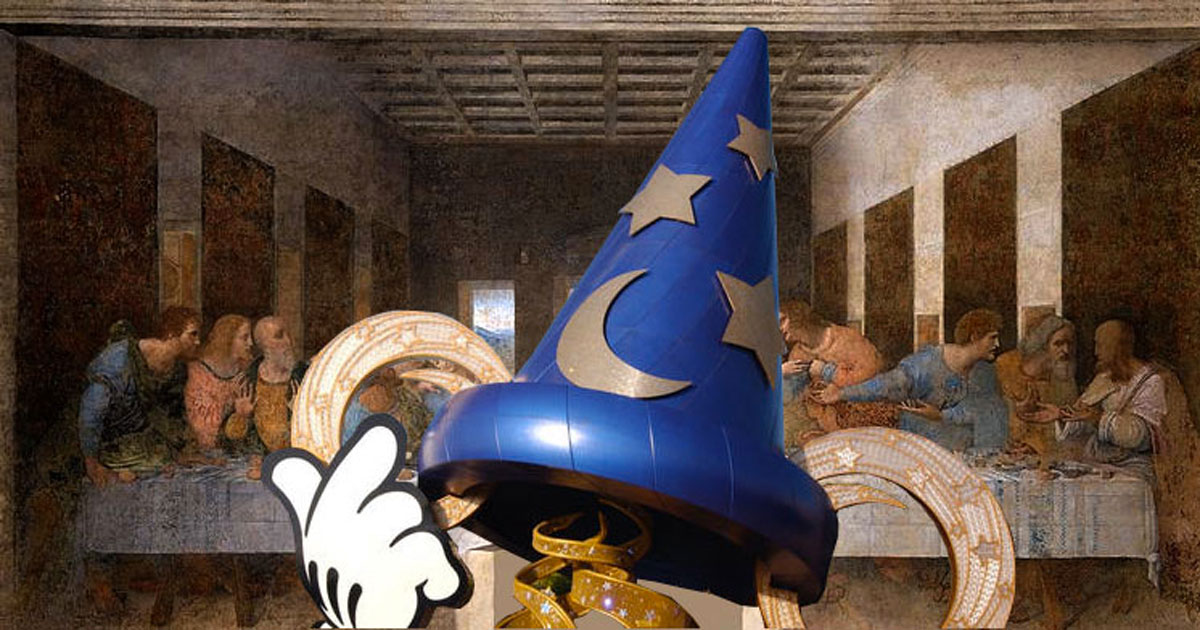 In the year 1505 — barely a decade after the discovery of North America by Christopher Columbus — the two greatest artists of all time were commissioned to decorate opposite walls in the Hall of the Five Hundred in Florence, Italy.

Leonardo da Vinci and his rival Michelangelo both began studies on their respective frescos and worked diligently to sketch out two glorious battle scenes on the walls of the great hall. This would be the only time these two masters ever worked together, at least until the invention of ninja turtles.

Michelangelo left Florence long before the completion of his masterpiece. But Leonardo persisted, erecting scaffolding and canvasing the walls with scenes of great turmoil — clashing horses, shouting warriors, historical figures. Ultimately, the Battle of Anghiari was abandoned, but not before it became one of the most respected unfinished works in art history. Renderings of the da Vinci original can be found hanging in the Louvre in France to this day.

About sixty years later, the Grand Duke decided that he needed to expand the hall in order to hold court, and he commissioned a painter/architect named Giorgio Vasari for the work. Michelangelo’s work had already been destroyed by a jealous artist several decades before, but Leonardo’s Battle of Anghiari was still in place when Vasari began.

Vasari was a talent, but he was no da Vinci. Yet if you were to go to Florence today and set foot in the Hall of the Five Hundred in the Palazzo Vecchio, it is Vasari’s work — not da Vinci’s — that you will see adorning the walls. Vasari expanded the walls and painted his own frescos. The da Vinci painting disappeared, and for centuries the Battle of Anghiari has been known as the “Lost Leonardo.”

News of the Removal of Mickey’s Sorcerer’s Hat

This “temporary” structure outlived original attractions SuperStar Television, Monster Sound Show, The Magic of Disney Animation, and the Backlot Tour. It’s been around longer than the park’s most popular attraction (Toy Story Mania), and even predates the park’s current name.

An entire generation of Disney fans have never seen the park without that hat.

I’m barely old enough to remember the fall of the Berlin wall. I have foggy memories of people dancing in the streets, ripping sections away. The celebration on social media yesterday seemed a lot like that. Finally Mickey’s Sorcerer’s Hat would be gone. But there was one segment of the fan population that seemed a little saddened by all this.

Their only family photos contain the Sorcerer’s Hat. They have never owned a Disney Parks t-shirt that did not represent the Studios with a triangle of blue headgear. Every time they’ve walked through the gate, Mickey’s gloved hand was waiting at the end of the street, pointed to the sky, beckoning them onwards.

“I loved Mickey’s Sorcerer’s Hat.” “The park needs an icon.” “What will they replace it with?”

These are a sampling of the cries heard yesterday. I am not here to berate you or tell you you’re wrong for your love of the Sorcerer’s Hat. It’s all you’ve ever known. The hat is your hometown.  You grew up there. You get resentful if other people don’t like it, and you take it personally when people point out its flaws. And you especially don’t want to hear from old timers telling you how much better things were back in the day. Stop living in the past, you might say. And you might have a point.

The Lost Work of Art

In 2007 — a mere six years after a garish, giant pin trading station was plunked down in the middle of Disney MGM Studios’ main Hub — an Italian art expert named Maurizio Seracini discovered a hidden message painted on an obscure flag held by an obscure soldier in one of Giorgio Vasari’s frescos in the Hall of the Five Hundred. The message was located a full twelve meters off the ground. In tiny gold script, it contained two simple words:

Translation: He who seeks shall find.

Vasari was an art historian — perhaps the first in history. He held Leonardo da Vinci in the highest esteem, and the Battle of Anghiari was praised even in Vasari’s own writings. The Hall of the Five Hundred was not the first time Vasari had been hired to demolish famous artwork. His renovation of a Dominican church had forced him to paint over a fresco known as the Holy Trinity by early Renaissance master Masaccio. But Vasari — without the permission of his employer — did not destroy the artwork. Instead, he had it plastered over, leaving a small pocket of air for the painting to survive behind the new fresco. And so it did, until it was rediscovered almost 400 years later during renovations of the chapel in 1860.

Seracini knew at once what Cerca Trova meant. Armed with the latest high tech gadgetry and the permission of the Italian government, he went to work. He bored holes into the Vasari fresco in the Hall of the Five Hundred and discovered old paint underneath. The black pigment was analyzed and found to be a very similar composition to that of da Vinci’s most famous work — the most valuable work of art on the entire planet — the Mona Lisa.

Preserved behind Vasari’s fresco. The Lost Leonardo. Waiting to be revealed again.

So to those of you who mourn the removal of the hat, do not fear. You will soon see for yourself. What you have observed up till this moment is but a shadow. You have been held prisoner in Plato’s cave. Darkness is all you have ever known. But in January, the chains come off, and you will crawl towards the light. And the brilliance of it will hurt.

But in the end, you will see and you will not wish to return to that darkness. Life under the sun is far better.