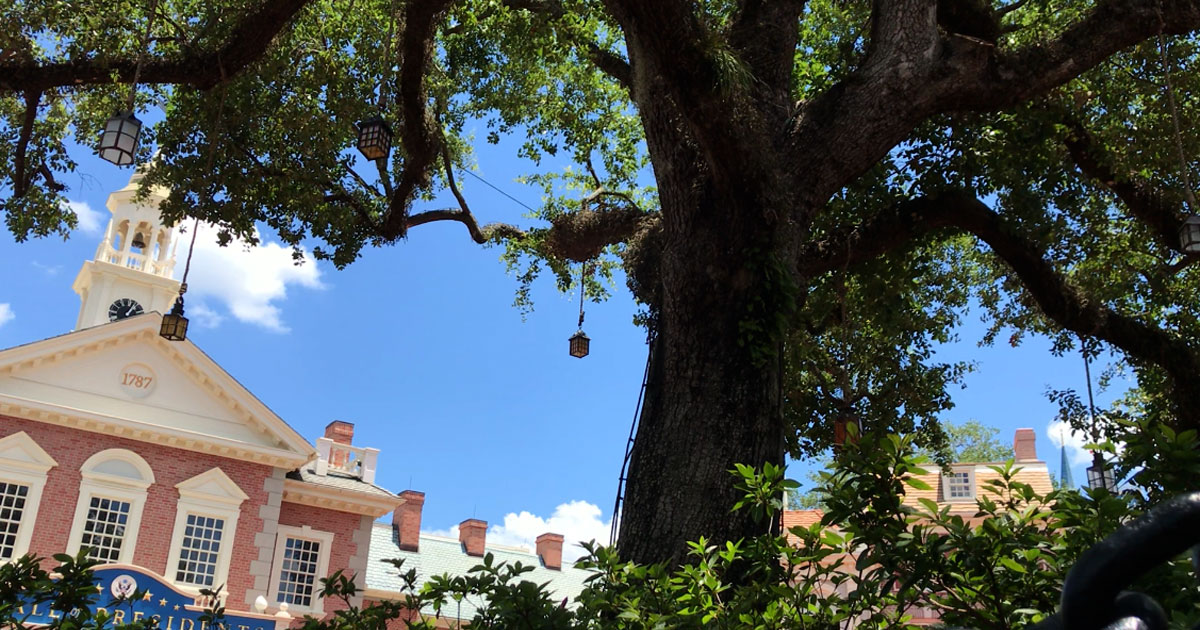 It was a dreary afternoon in the Parkeology Library. I was reviewing our collection of old souvenir picture books, Michael Eisner biographies, and square guide maps when I stumbled across a tantalizing clue to a lost legend involving the Magic Kingdom Liberty Tree.

Little did I know that this clue would spark a treasure hunt, which would soon span across the entire Walt Disney World property.

The Liberty Tree itself isn’t even mentioned in Magic Kingdom guide maps today. But its trunk tells a literally twisted tale of landscaping ingenuity, with a heart-stopping Parkeology discovery at the end.

Come with us now on this modern day DaVinci Code adventure as we attempt to unravel the lost bloodline of the Liberty Tree.

A Forgotten Manuscript Illuminates the Path

It all began with an innocuous caption from a souvenir photo album from Disney World’s 15th anniversary in 1986.

They still sell some variation of this book in parks today, updated with the latest and greatest attractions. This one happened to be the first Disney theme park book that I ever owned.

My copy is well-worn. I must have thumbed through it hundreds of times in my childhood. This and the Abrams EPCOT book (a sacred tome in its own right) formed the backbone of my Disney parks library until adulthood.

I still return to it now and again out of nostalgia. But this time, when I got to page 48, I stopped.

The picture is nothing special. Almost poor quality, with the entire tree just a shadow against the darkening sky. The blurb of text offers a basic description:

The Liberty Oak Tree in the Magic Kingdom is a hundred-year-old southern live oak; quercus virginiana. Found six miles from its present home in Liberty Square, it is about 40 feet tall and 60 feet wide, and weighs more than 38 tons. It is by far the largest living specimen in the Magic Kingdom, and probably one of the largest ever transplanted.

What stopped me was actually the Latin name for the tree. Quercus virginiana.

I am no botanist, but I know the Latin names of exactly two trees–both because I have read this book a thousand times (the other is Disneyodendron eximius, which is the Latin name for the Swiss Family treehouse. I literally just typed from memory without having to look it up. I am a nerd).

But there was something else preventing me from turning the page. A fact long forgotten.

The Liberty Tree was transplanted.

Of course it was. Everything in the Magic Kingdom is a fabrication. But consider the mere act of relocation. This design element was considered so important, they took a 38-ton tree from 6 miles away and moved it smack into Liberty Square.

As I dug deeper into the archives, I soon realized that the entire Liberty Tree story was a great source of pride to early Walt Disney World writers. Open almost any older publication and you’ll be confronted with charming anecdotes about this mysterious specimen.

What was so special about this tree? Why did all these early marketeers keep bringing it up?

After some deliberation, I crossed over to our collection of vintage VHS Disney video tapes and plucked a title from the shelf.

Within minutes, I had my answer.

Johnny Tremain and the Birth of the Liberty Tree

Plant the seed in our homeland, boys. Let it grow where all can see
Feed it with our devotion, boys. Call it the Liberty Tree
— Liberty Tree by George Bruns (1957)

Johnny Tremain is a Disney film made 14 years before the Liberty Tree would be transplanted to the Magic Kingdom. The movie tells the tale of a young silversmith apprentice who gets caught up in events leading to the American Revolutionary War.

During a pivotal scene, Johnny and the Sons of Liberty hang lanterns on a Liberty Tree as a rallying cry for the revolution.

The Sons of Liberty were almost poster children for cryptic secrets. They were an actual underground organization, with a secret membership roster and chain of command. The roots of the organization go all the way up to Samuel Adams, one of the Founding Fathers of the United States.

But the original Liberty Tree in Boston (an elm, not a quercus virginiana), didn’t even make it to 1776. It was felled by a British loyalist fittingly named Nathaniel Coffin a year before the Declaration of Independence.

Johnny Tremain is not available on Disney+, despite being specifically filmed for Walt Disney’s TV show, with a personal introduction from Walt himself.

The song for the lantern-hanging scene was written for the film by George Bruns, who was posthumously awarded the Disney Legend award in 2001. The song itself is either called Sons of Liberty or Liberty Tree, depending on the source.

And it gets weirder. The movie has surreptitious ties to Hollywood royalty. Johnny Tremain features an uncredited young actress in the role of Johnny’s friend Dorcus.

Sharon Disney. Walt Disney’s daughter in her only screen role.

The Disney theme parks are only too happy to weave themselves into this twisted tale, like some sort of Masonic rite.

The Liberty Tree song can still be heard as Liberty Square background music. It also pops up all the time as an accompaniment to marketing footage about Liberty Square.

If you want to see how deep the rabbit hole goes, consider the song “In the Days of ’76,” which appears in the American Adventure at Epcot. It closely mirrors the Liberty Tree melody.

One of the few full-service dining locations in the Magic Kingdom is called Liberty Tree Tavern–probably your only chance of seeing “Liberty Tree” on a guide map today. The restaurant even includes a room dedicated to the most punchable Founding Father, Benjamin Franklin.

But the actual tree itself is outside. In the movie, many lamps are hung from the Liberty Tree. The Magic Kingdom restricts it to thirteen as an act of symbolism.

Thirteen lanterns. One for each of the colonies.

Three Legends of the Liberty Tree

The deeper I dug, the more intrigued I became. Book after book seemed to recite many of the same Liberty Tree facts, often embellishing the legend.

Going all the way back to Disney World’s first decade, souvenir books were making a big deal about the transplanted Liberty Tree. The Story of Walt Disney World above pre-dates EPCOT Center. Here it gives the weight as 35 tons, a slight variance from the 38 mentioned a few years later.

And another incredible detail surfaces. The Liberty Tree is not one tree, but two. A younger oak was grafted into its base to improve its shape.

In 1998, Walt Disney World was already on to its fourth park. But the souvenir book is still highlighting the Liberty Tree, giving us not one but two pictures of the tree in transit.

And then finally, there is Birnbaum’s.

The 1994 Official Guide to Walt Disney World ties it all together, giving us the third and final mystery — the one that would start me on this incredible search.

Birnbaum lists the Liberty Tree as the first attraction in Liberty Square, and gives us this detailed description of its relocation.

Since the tree was so large (weighing an estimated 35 tons), lifting it by cable was out of the question–the cable would have sliced through the bark and into the trunk’s cambium layer, injuring the tree. Instead, two holes were drilled horizontally through the sturdiest section of the trunk, the holes were fitted with dowels, and a 100-ton crane lifted the tree by these rods, which were subsequently removed and replaced with the original wood plugs.

Two holes bored through the tree! This is the sort of obscure, meaningless detail that sparks the imagination of Parkeologists.

Birnbaum goes on to describe an infection that set in because of the bored holes, and offers this as an excuse for why the second younger tree was grafted in.

But is it any of it true? Enter another Disney Legend.

Bill Evans was the landscape engineer responsible for Walt Disney World. Thousands if not millions of plant specimens fell under his care during the massive construction project.

In an interview with Disney History Institute, Bill Evans (who would later receive Disney Legend status) confirms and elaborates on this dowel rod method of tree transplantation.

Due to its success we carried the method down to Florida where the local nurserymen and landscape people were absolutely horrified, including the professional pathologist from the University of Florida I might add. He predicted our trees would die in two years if we bored a hole through them. And we must have moved a thousand trees that way in Florida, all kinds of trees including the Liberty Tree.

So now we have three confirmed oddities about this mysterious Liberty Tree.

Leave it to the Official Guide to tie everything together. For in the last paragraph, Birnbaum throws down the gauntlet:

Careful observers will be able to spot the plugs and the portions of the trunk that were damaged.

The treasure hunt reaches its surprising conclusion on the next page. Click below to continue.