Ben Franklin is an unrepentant theme park windbag and he deserves to have his butt kicked.

I’m not going to focus on the petty stuff, because that is beneath me. If you want to wear your stringy dishwater hair like a half-bald Michael Bolton, more power to you.

Nor will I pick on his frilly-suit/white-socks ensemble. Wear whatever feels comfortable, even if it makes you look like a blue turd suiting up to play for the ’75 Lakers.

Instead, here are 5 very specific episodes from Ben Franklin’s theme park repertoire that make me want to wipe that smug, jowly grin right off his polished wooden teeth with one good punch.

Surely I’m not alone in this.

Ben Franklin gets credit for inventing everything from Electricity to Democracy. I’m pretty sure God invented the former, the Jedi invented the latter, and the only thing Ben Franklin actually invented is the pen-name Silence Dogood, as a way of writing anonymous snarky commentaries about famous people.

Ben Franklin’s gift for glomming onto every little success and claiming it as his own extends even to theme parks. For years, EPCOT Center boasted about how Ben Franklin was the first Audio-Animatronic figure to walk, when he climbs a flight of stairs to visit Thomas Jefferson in The American Adventure. 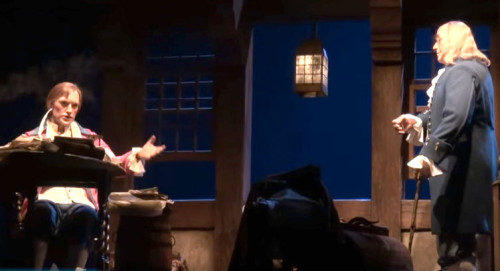 This is all fine and good, except that Ben is clearly attached to the wall like the world’s most ridiculous stair chair, with maybe one mechanical peg leg to keep him balanced.

This is like me claiming to be the first Animatronic to cook stir-fry by holding an empty wok and making sizzling sounds. 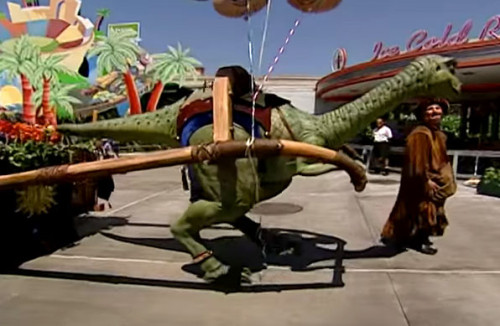 Sorry, Ben. You lose to a freaking dinosaur.

And does Ben show any shame at this mockery of technological achievement? No, instead he berates Thomas Jefferson for being tired — this after acknowledging that he slept through the entire afternoon session of Congress.

Oh, sure, Ben did eventually walk in a theme park. But only because they hired an actual human to do it for him.

Mark Twain, as we know, is a man’s man. Mark Twain worked on steamboats for a living. Mark Twain grew a burly mustache. When Mark Twain needed a pen name, he didn’t invent some middle-aged widow named Silence Dogood as his alter ego.

Mark Twain smoked cigars and let his work speak for itself. Mark Twain wore all white, like a good cowboy or John Travolta. If Mark Twain was a hugger, he’d give you a bro hug.

When the two shake hands at the end of The American Adventure, Ben can’t even touch him. He just sort of flops his hand around like a dying river trout. It’s like one of those movies where the silly aliens don’t know you are trying to give them a fist bump. Mark Twain just lets him flail around, cocking one eyebrow and blowing smoke in Franklin’s face as a test of manliness. 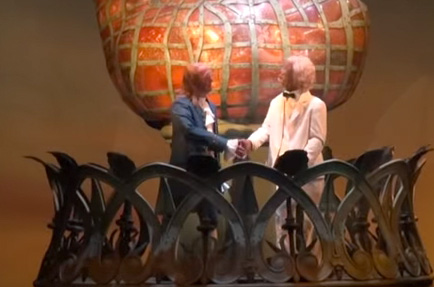 On the bright side, maybe Ben is now the first Animatronic to turn purple and cough delicately like a middle-aged widow.

Just grab the man’s hand and give it a firm shake, Ben. It’s not hard to grasp (no pun intended). Especially for a mental giant who had the brilliant foresight to fly a metal kite in a thunderstorm.

Maybe he could learn a thing or two from his own insignia for the Philadelphia Contributionship over in Liberty Square (fire insurance – another thing he “invented.”)

#3 – Ben Franklin Hawks All Over His Lines

Why Ben Franklin gets any screen time in something called The Hall of Presidents is beyond me. The only thing Ben Franklin was ever president of was The Ben Franklin Fan Club.

But for some reason, past incarnations of the attraction found Ben Franklin “inspiring” his feeble-minded countrymen (also known as “Future Actual Presidents”) with phlegmatic speeches about the importance of what they’re doing.

And here I’m using phlegmatic in its “disgusting mucus throat coating” meaning, not “self-possessed and calm,” which the dictionary seems to think is correct.

Franklin’s speech can be heard at 2:18 in the following video.

When he says “infallibility,” it sounds to me like he should be shaking his jowls like Boss Nass. 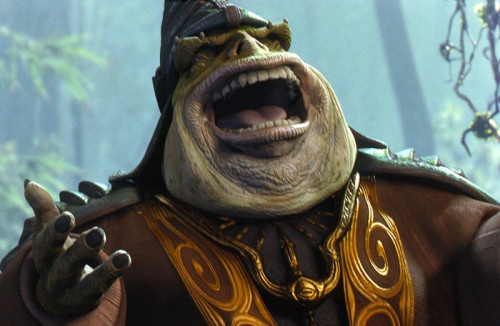 Yousa no tinkin yousa greatest inventor of all time?

Fortunately, this version of the show is no longer around. But the line reading has stuck with me, because nothing is so attractive as saying the word “infallibility” like you are about to blow snot all over 43 leaders of the free world.

Maybe he can invite them all over to the Ben Franklin Room at the Liberty Tree Tavern and regale them with more appetizing lung loogies over a nice turkey dinner. Don’t doubt the infallibility of this gravy, Washington, my good man.

I could go on about how he refers to the Declaration of Independence as an “instrument” instead of a “document,” but I suspect Ben Franklin is only trying to take credit for inventing marching bands.

Warning to you internet-savvy readers: Do not google for “hot Ben Franklin.” There is no good to be found down that path. It will only lead to darkness.

Of course, that hasn’t stopped cosplayers from trotting out the turd-suit/Laker-socks uniform. They even do it in the parks.

The worst offender is Grandpa, at the Carousel of Progress. 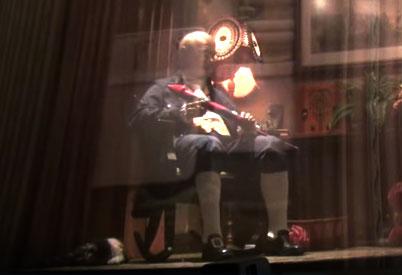 The sight of this poor old man — just a few stringy hair extensions away from mastering the art of the floppy handshake — is enough to break anyone’s heart.

Word to the wise: If you happen to find yourself in an austere patriotic theme park presentation, opposite one of the most gifted wits in literature, who is not only smoking a cigar on stage without lighting his mustache on fire, but also has provided enough one-liners to fill an entire Riverboat narration track — don’t fire off an ill-conceived joke about one of your tacky inventions.

“We now face the danger, which in the past has been the most destructive to the humans: Success, plenty, comfort and ever-increasing leisure. No dynamic people has ever survived these dangers.”

Ben Franklin, master of clever witticisms like pretending to be a middle-aged widow, fires back:

“I may have invented these bifocals I’m wearing, but I can assure they are not rose-colored!”

Wha…? I mean, huh? You invented… okay, you invented bifocals, I guess. And that’s important for us to know because--well, I guess because everything is about you, Ben.

I get it now. So clever.

I may not have invented the idea of silly food metaphors, but I can assure you that you are about to enjoy a tasty knuckle sandwich.

Man, I just hate that guy.