Rogue One is actually pretty great. But in the words of Luke Skywalker, there’s something familiar about this place. That desperate band of rebels may be trying to steal the plans to the Death Star, but the movie itself has already stolen from another moon-sized battle station six times.

Yes, Rogue One is ripping off Disney World.

Before we begin, let me dispense with the pleasantries. If there’s a Venn diagram showing Star Wars fans and Disney parks fans, the overlapping section would clearly be labeled Parkeology. So mark well me words, matey. There be spoilers ahead.

The series is called “Star Wars” so we expect spies to be part of the landscape. But actual spies in Star Wars movies are pretty rare. Darth Vader makes one reference to “rebel spies” in the original movie and Mon Mothma credits Bothan spies for stealing plans to the second Death Star in Return of the Jedi. But otherwise, the spies stay in the shadows where they belong.

That is, except for Star Tours 2: The Adventures Continue.

The whole plot of this Disney attraction — which debuted in 2011, a full year before Disney purchased Lucasfilm — is centered around escorting a rebel spy to safety. There are even t-shirts and everything. 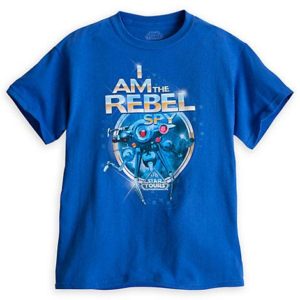 We are only two films into the new generation of Star Wars movies and already they are recycling plots from Disney rides. Rogue One’s main characters are the spyingest bunch of rebel spies that ever rebelliously spied. It has all the touchstones. There’s a Mission: Impossible scene where Jyn Erso dangles inside a sterile white vault. There’s a martial arts guy who fights like Jason Bourne. I think there’s a droid called Double-Oh-Seven.

And Star Tours 2 takes place between Episode III and Episode IV. As does Rogue One.

And Star Tours features psychopathic droid pilots. As does Rogue One.

And the Star Tours flight call sign is Fourteen-Oh-One. Which rhymes with Freaking-Rogue-One.

2. Stormtroopers on the Beach

The marketing blitz for Rogue One showcased a now-iconic image of Imperial Stormtroopers patrolling the shores of a beautiful tropical island. The new planet of Scarif — with its towering library of beach reading material and its own climate-controlled shield dome — would be the premiere vacation spot in the galaxy if it weren’t for all the heavy artillery. 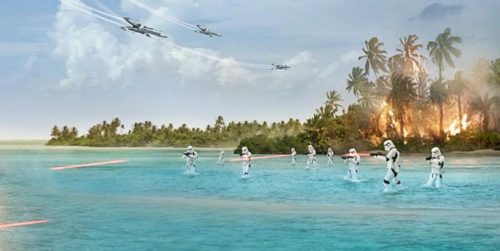 We think the big fire in the trees is just from the nightly luau / Gamorrean guard roast.

Rogue One’s filmmakers think this is the first time we’ve ever seen such a heady contrast of tranquil paradise and sinister militarism. And they’d be right. If they had never been on a Disney Cruise.

That video is mostly Stormtroopers patrolling the Lido deck of the Disney Fantasy while on a voyage into the Western Caribbean — and it’s from almost a year ago. Granted, the garrison didn’t disembark onto Castaway Cay’s sandy white beaches, but they had a whole day dedicated to Star Wars on the cruise. And what’s more, they did it on eight different sailings.

If you’ve got Stormtroopers dipping toes in the Mickey pool or hamming it up by the Donald waterslide while hot Caribbean sun sparkles off a stunning blue sea, you’ve pretty much recreated Scarif.

Or more accurately, Scarif has recreated you.

3. Ride the Monorail to the Eadu Welcome Center

Eadu is another new planet introduced in Rogue One. It’s a remote base where Galen Erso and his crack team of Imperial scientists are putting the finishing touches on some mind-blowing (or planet-blowing) technology that is certain to be misused by some crazy zealot.

The Rogue team approaches the hideout under the cover of darkness, knocks out a few guards, and then hops the Star Wars version of the monorail that takes them into the main complex.

In other words, it’s basically Nomanisan Island, Syndrome’s lair from The Incredibles.

But without as much red spandex.

Any suitably dangerous high-tech compound is destined to become a tourist destination. Pixar even released a little travelogue short film pitching Nomanisan Island as a resort destination for The Incredibles Blu-Ray release.

And invariably these places will use a monorail to get people around. Wonder where they got that idea?

This is not just a one-off. What if there was a potentially dangerous high-tech cloning facility that you wanted to open to the public?

Your “Highway in the Sky” to mayhem and bloodshed.

Or what if you decided that the best way to showcase your super-advanced, murderously self-aware robots was in a cowboy theme park? 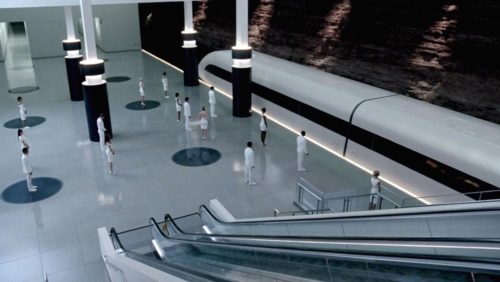 Possibly the greatest supervillain lair of all time comes from another spy movie, You Only Live Twice. SPECTRE’s volcano base — complete with monorail — was a major inspiration for Nomanisan Island. There is no evidence that SPECTRE’s volcano base ever became a tourist attraction (unless you count Tokyo DisneySea), but that’s probably because it was at its time the largest movie set ever built at Pinewood Studios in the UK.

Know what other film was shot at Pinewood? Rogue One.

4. Darth Vader Can Fight All Of A Sudden

Though vastly preferable to the tree toad Yoda fights in Attack of the Clones, one of the biggest knocks against the original trilogy is that the lightsaber duels were straightforward affairs. Some people have been waiting a long time to see Darth Vader kick butt against someone other than his mismatched son or a 70-year-old hermit.

Rogue One delivers the Vader fight to end all Vader fights when he dispatches a hallway of crack shot rebel soldiers armed only with a lightsaber, the Force, and a healthy dose of can-do attitude.

During the fight, Vader fends off approximately three million blaster shots with his lightsaber. We’ve known Jedis and Sith could do this since Luke performed the feat against the Speeder bikes on Endor. We’ve even seen pre-Vader Anakin Skywalker do it in the prequels. But we’ve never seen the Dark Lord himself wield his saber with such precision.

Oh wait. Yes we have.

Our first introduction to Darth Vader in Rogue One is in a creepy Sith castle on Mustafar. His hooded Personal Assistant / Publicist appears while Darth is hanging out in a Star Wars hot tub known as a Bacta tank.

Shouldn’t those royal guards be holding a towel?

The Bacta tank is a callback to The Empire Strikes Back, which had Luke Skywalker recuperating from his near-death experience on Hoth. It’s a medical device of some kind, which Vader desperately needs, since, you know, he had all his limbs cut off and then caught on fire from lava.

The Bacta tank dominates the center of the room from floor to ceiling, and has some menacing little tubes out the top, while the whole thing sits on a sort of pedestal, capped on each end by industrial, tooth-like lids. It’s the sort of bathtub Dracula might build.

On the other hand, it does look exactly like a teleportation tube designed by XS-Tech, the alien company that accidentally brought a blood-thirsty creature right into the middle of Tomorrowland. 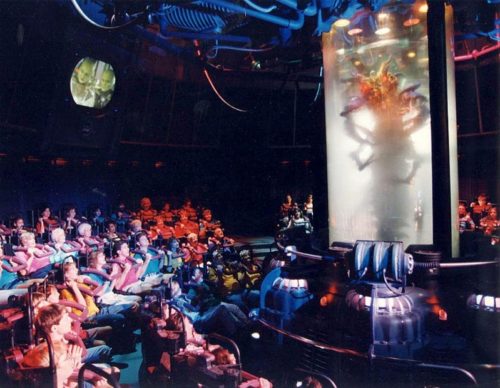 “You were the Chosen One!”

The ExtraTERRORestrial Alien Encounter is one of the few Disney attractions straight from the mind of George Lucas. Of all the Disney references on this list, this is the one I secretly hope is totally intentional.

One of the controversies surrounding Rogue One is how it uses a blend of archive footage and CGI to insert aged or dead actors into the story.

Probably the biggest surprise is the appearance of Princess Leia at the end of the film, looking exactly as she did at the beginning of the very first Star Wars movie back in 1977.

CGI humans often create the so-called “uncanny valley” effect, in which people find them unsettling in spite of their near photorealism. On the other hand, Leia is less uncanny than Hayden Christenson’s real-life performance in the Star Wars prequels. Putting her in the movie packs a satisfying emotional punch.

But before we give Rogue One a pass here, let’s return one more time to Star Tours 2: The Adventures Continue.

As one of the randomized sequences, Princess Leia appears as a hologram, utilizing original footage from A New Hope and cleaning it up with CGI.

So apparently we’ve had young Leia around for the last five years. If I were Carrie Fisher, I’d start taking a hard look at my contract for Episode VIII.