Fan-favorite Star Wars character Jar Jar Binks has been elevated to an expanded role in the 4-year-old ride Star Tours ride, thanks to the Disney marketing machine.

This move is no doubt intended to counteract the potential fall-out from another recent change to the ride: The addition of an entire sequence based on a scene from The Force Awakens, which is a low-budget art-house movie that Disney dumped into its late-year release slate, presumably so it could write off the loss.

One can certainly question the wisdom in updating an acclaimed classic ride with material from a potential box office flop. It smacks of desperation. Most visitors have spent thousands of dollars for a chance to explore the Wookiee homeland or win the Boonta Eve classic, and the move is sure to outrage some passionate and vocal opponents.

To rub salt in the wound, Disney also added a hologram sequence of cloying droid BB-8, a character many Star Wars purists find “jarring” and “offensive.”

The jury is still out on whether or not The Force Awakens will eventually become the kind of financial and critical success that some in the company hope it will achieve. Meanwhile, they are leaning on the larger role of Jar Jar Binks to deflect criticism.

Jar Jar Binks has appeared in the ride ever since it opened as Star Tours 2: The Adventures Continue back in 2012. He appeared as a glorified cameo in the “Naboo” sequence of the film, in which your ride vehicle plunges into an alien ocean. Mr. Binks could be seen waving off in the corner among some seaweed, and ducking as your ship passes overhead (at 3:08 in the video below):

But in this latest incarnation, Jar Jar Binks now swims directly in front of your Starspeeder, offering riders a titilating glimpse of the Gungan’s hind quarters. And in the kind of hilarious comic hijinks which has made the character beloved the world over, he finds himself plastered like a bug on the windshield, unable to move. We even get a flash of that trademark Jar Jar Binks tongue.

Here is the best video I can find, which is in full-on blur mode, right up until Jar Jar slides off the windshield. The Starspeeder is entering the water at about the 3:12 mark.

It’s unclear why Disney opted to modify only the Naboo sequence of the ride, while leaving the other existing scenes untouched. One can only surmise that building a wooden statue of Anakin Skywalker to recreate Hayden Christensen’s performance was simply not cost-effective, given the budget.

In the meantime, audiences will just have to be satisfied with the expanded role of Jar Jar Binks, doing a nice tribute to Dory’s surprise appearance in Turtle Talk. 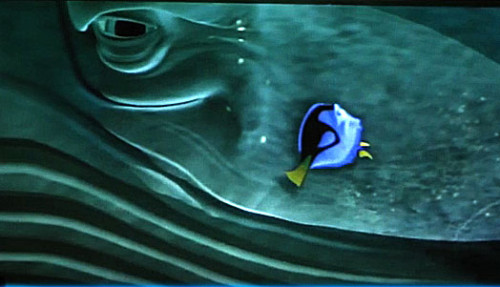