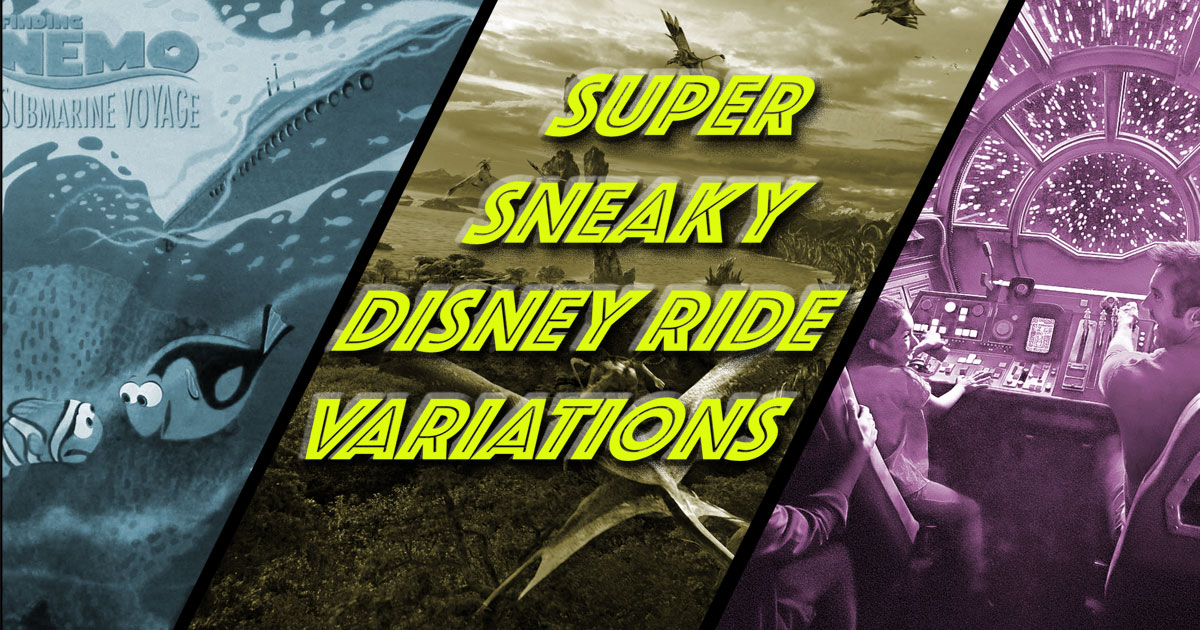 When Imagineers want to give you a slightly different ride experience, they are chock full of sneaky Disney tricks.

Sometimes it’s random, like surprising you with the most hated character in the Star Wars universe (no, not Rian Johnson). Other times, they have to figure out how to merge two branching storylines back together.

But every now and then, we come across some sneaky Disney variations that are so subtle and mundane, we’re amazed they even bothered.

As it turns out, all of these have a purpose.

And we bet most people never even thought about it.

You Can Set Your Watch By Millennium Falcon Smuggler’s Run

Millennium Falcon Smuggler’s Run is one of those rare attempts by Disney to let the guest control the outcome. The variations are endless:

Depending on your skill at video games, you’ll come out as either a “Grandma,” a “Jim,” or a “Burnt Turkey.” (that’s a Carousel of Progress joke).

But there’s one variation that has absolutely nothing to do with the choices you make while riding.

It depends on a choice you make before you even get in line.

Fly out in the morning, and you’ll see Batuu stretching out below you in the full sunlight of its three suns.

If you do your smuggling after dinner, you’ll find the planet has turned to the Dark Side, literally speaking.

It has absolutely no impact on the mission itself. When your main objective is on a completely different planet, daytime smuggling is exactly the same as nighttime smuggling.

But in case you are the sort who is always getting confused by differences between the Western hemisphere and a PlayStation, your aerial vistas during take-off and landing always matches Florida’s real time of day.

(no word on whether it factors in Daylight Savings Time).

Sneaky Disney Gets Even Sneakier

As strange as it sounds, Millennium Falcon Smuggler’s Run is not the only time you fly in and out of Batuu.

Star Wars Rise of the Resistance does the Exact. Same. Thing.

This video has a nice side-by-side comparison at the 15:45 mark. Spoilers ahead.

Not to be outdone, Star Tours: The Adventures Continue also flies into Batuu, courtesy of a special bonus ending that was added back in 2017 when The Last Jedi was released.

Unfortunately, just like The Last Jedi, Star Tours II didn’t care about fan-pleasing Star Wars themes like checking your watch to make sure the fictional planet matched the proper time of day. It was perpetually mid-afternoon in the Star Tours version of Batuu.

(the Batuu ending has since been swapped out for a new bonus ending based on the Rise of Skywalker, in which JJ Abrams tries to undo everything about Star Tours II)

Avatar Flight of Passage Knows Your Right From Your Left

As you exit its queue area jam-packed with insane detail, Avatar Flight of Passage saves one of its most mundane and sneaky Disney tricks for its second pre-show.

It takes place when Dr. Jackie Ogden (who runs the program) is giving you the briefing on how to ride a Banshee.

As Dr. Ogden talks, a how-to video will play, showing glowing faceless guests (dare I say, avatars) walking up to a row of 8 seats. She will then tell you how to mount said seat and push your belly all the way forward so that the belly-tickling effect will be, um, effective.

Surely I am not spoiling a sneaky Disney secret when I tell you that there are always more than 8 people riding Avatar Flight of Passage at any one time. In fact, there are 6 rows per theater — and 4 total theaters — in operation.

Depending on which theater you get, you may be walking in from the left side of the screen or the right. And somehow the pre-show knows this, because it shows you a different rendering of the how-to video!

Otherwise the videos are exactly the same.

Sneaky Disney Gets Even Sneakier

Just before entering the Link Chamber, Dr. Jackie Ogden (who runs the program) shows you an infographic of what it’s like to join a human being to an Avatar.

The human always seems to be Driver 14, a precocious tween girl. But for some reason, the picture of the Avatar alternates between a smiling female Na’vi and a rather doltish looking male.

There does not seem to be any rhyme or reason to this variation. It doesn’t have anything to do with the other variation. It’s kind of random.

Our best guess is that this feature may have originally intended to show an actual guest’s picture as the driver (similar to the rebel spy in Star Tours), and then match it to a male or female. But they were so exhausted from learning the difference between left and right, that gender-matching was just too much.

Last but not least, we stumbled across yet another variation in this pre-show while researching the previous variations. This one is more of a footnote, since the old variation is no longer running.

One part of the how-to video shows the glowing blue ghosts demonstrating the proper way to drop random crap into a storage bin, since you’re not allowed to take it with you on your space dragon.

Back when Avatar Flight of Passage first opened, the first item into the bin was a water bottle. Sometime shortly after, they must have realized that cell phones were a bigger issue.

This video shows the before, only a week or two before the ride’s official opening. And this is the after, barely a month later.

Finding Nemo Submarine Voyage is Two Rides in One

When you board the sprightly yellow aluminum coffins of the Finding Nemo Submarine Voyage, you’ll find yourself facing either to port or to starboard.

For you landlubbers, those are fancy terms for left and right.

This being Disney, everyone needs to get basically the same experience. But since the essential viewing experience of the Submarine Voyage is to hunch over and stare through a glass portal barely a foot wide, Disney has to duplicate the entire attraction — once for port and once for starboard.

Any scene you encounter in the ride has to follow these basic mechanics. Sometimes it’s easy, like the simple animatronics at the beginning of the ride. These are more or less stationary in the water as you sail past.

But once you enter the show building, the bulk of the story unfolds on a series of cleverly disguised underwater screens showing Nemo and his friends.

Anything involving motion has to be flipped. For instance, when you enter the East Australian Current — which briefly parallels your submarine — the starboard side needs to get a mirror image of the port side.

Scenes of characters interacting with sharks in old shipwrecks, bouncing on jellyfish, or talking to whales all have to be flipped so that the other side gets the same experience.

And not just the screens. There are some actual physical sets constructed in there, all of which also have to be duplicated in mirror image.

Most of the problems with Finding Nemo Submarine Voyage can be solved precisely because so much of the ride is just a series of screens.

Your basic desktop movie editing software or Photoshop tool already has a menu that lets you “Flip Horizontal.”

In the example above, the average guest has no clue which one is the “real” image. And it literally doesn’t matter.

But here is something truly delicious — a problem unique not just to the Submarine Voyage, but specifically because they chose Finding Nemo as the source material.

One of the more unique aspects about Nemo is that out of all the fish in the sea — indeed, out of virtually all characters in the Disney pantheon — he’s the one fish you can always tell his left from his right.

Nemo has a lucky fin. It’s a birth defect of sorts that causes his right fin to be much smaller than his left. It’s one of the reasons that Marlin is so overprotective.

If the ride designers simply flipped the image, half the riders of Finding Nemo Submarine Voyage would be getting the wrong lucky fin (a problem which got Captain Hook and Indiana Jones into trouble).

Of course, the alternative is to completely re-animate Nemo and totally re-render his scenes to keep him anatomically correct.

Surely they didn’t spend time and money doing that, right?

Okay, it’s impossible to grab decent close-up pictures of the Submarine Voyage, but they totally got Nemo’s lucky fin right for both Port and Starboard sides.

That they put this much thought and effort into such a minor variation is absolutely insane.

And that makes it our favorite sneaky Disney ride variation.