I love simple solutions to complex problems.  Maybe that’s why I used my first pick on Alexander the Great in my World Conquerors Fantasy draft.  Not only did he solve the Gordian Knot, but he’s led the league in rushing the past three years.  Plus, he’s a huge Disney fan.

The best solutions are so simple that they completely fool you into dismissing them.  You’ll never even realize there was a problem there to begin with.  Only by working backwards do you spot it:  a story angle that probably gave the Imagineers fits until they hit upon the simple solution.

There’s a great moment in the book “On Directing,” written by David Mamet, a prize-winning playwright for such works as Glengarry Glen Ross, Speed-the-Plow, and Tarzan Rocks.  In one chapter, he uses brilliant logic to teach his film students that the most important element in a scene is not the actor’s emotion, the camera angle, or the lighting, but the fact that a kid’s school report binder be recognizable from one shot to the next in order for us to follow what’s going on.

The same principle is at work in the Great Movie Ride.  If you know the storyline, you know that at some point the ride vehicle is hijacked (and if you didn’t know that, why are you hanging out on a Disney fan site?  You’re creeping us out!).  It can happen in one of two places:  Either in the “Underworld” set, in which you’re hijacked by a gangster, or (somewhat less frequently) in the Wild West, in which your hijacker is a bank robber.

Later, your original tour guide makes a stunning comeback when your hijacker gets fried trying to steal a sacred treasure from the Temple of Doom.  Your original guide doesn’t seem to mind.  He or she fans the smoke away from the charred skeleton, gives a happy little “ta-da!”, and jogs down the stairs to resume the tour.  Nevermind that we just escaped a brutal hostage situation.  Nevermind that a gun-toting maniac has been driving us into one nightmare after another.  Nevermind that we just saw the flesh burned off a living human being.  The important thing is that she’s back!  Did ya miss me?

Just one thing though.  In order for us to accept what has just happened, we have to make a positive I.D. on the corpse.  We have to know that our hijacker is truly dead, because we don’t want him popping back up in Oz with hatchet in hand and blood streaming down his face.  That might be a fitting end to the Great Scary Movie Ride, but this is Disney, so we need the comfort and warm, fuzzy security blanket of a ghastly skeleton.  In essence, we need to the entire audience to suddenly become a crack forensic team, without the luxury of dental records or DNA samples.

Somebody is dead, that much is certain.  But how do we know it’s our hijacker?  That corpse could be anybody.  There’s nothing left but bones, and most of us left our carbon dating kits back in the hotel room.  We don’t even know if it’s a guy or a girl.  It could be Al Capone or Calista Flockhart, for all we know.

But here’s the fun little trick.  Our hijacker is either a male gangster or a female bank robber.  The skeleton takes care of the gender concerns, unless you’re a Biology major (in which case, what are you doing here?  You’re creeping us out!).  And the rest of the problem is solved by having the hijacker have a gun and wear a hat.  Those are the only props remaining:  The charred hat brim and a melted pistol.  So whether you were hijacked in the Underworld or the Old West, the scene works.  A neat and tidy little solution to get everybody back on track and accept the storyline. 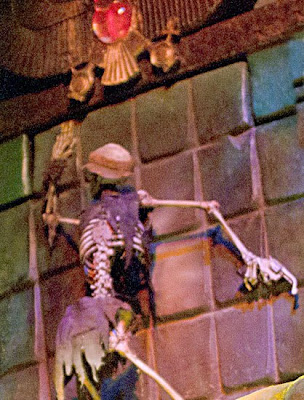 Except I still don’t understand why the tour guide is so darn cheerful afterword.  Inappropriate jokes about going for popcorn…  The hijacker was evil, but he or she was still human!  And you’re just gonna laugh as they’re burned alive?  Have you no heart??