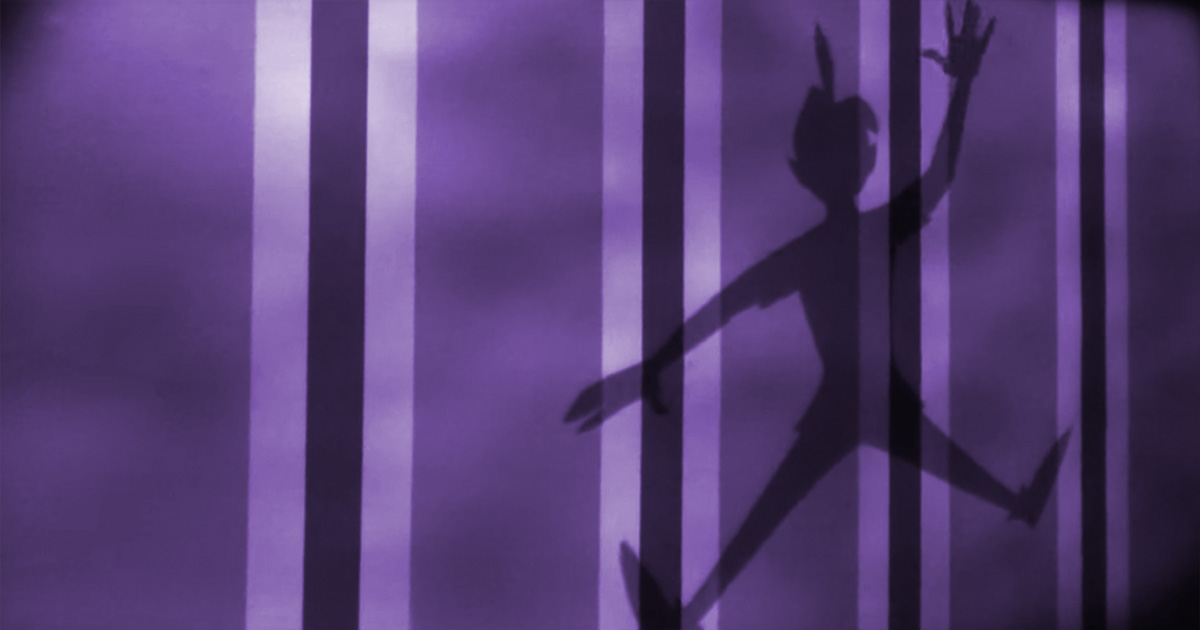 In the Parkeology offices, we have a pretty decent collection of shadows. Some of these are fairly standard. You’ll find them in any shadow collection. But we also have some rare ones. We’ve got a Yeti shadow from Everest and an actual talking Brer Frog shadow from Splash Mountain. A few months back, we captured Peter Pan’s shadow, as he slipped in one night to listen to stories about Neverland (mostly about himself).

You remember Peter Pan’s shadow, right? It’s an important plot point of the movie since that’s how Wendy first meets Peter, by stitching his shadow back on. The shadow pops up in Peter Pan’s Flight as well, in the very first scene of the Darling nursery.  It beckons us out the window and on to Neverland. 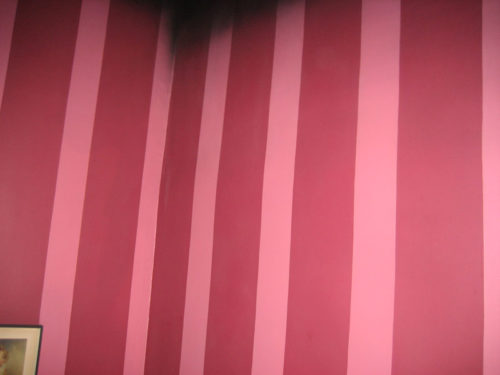 The Darling Nursery. Or, the inside of my esophagus.

Peter Pan’s shadow normally appears on the wall above, but there is no shadow in the picture. That’s because we captured it. And we won’t be giving it back unless you pay us a lot of money.  Sorry for ruining the ride, but we just had to have it.

(The other possibility is that we stupidly tried to take a picture of Peter Pan’s shadow with the flash on. But we prefer to think that we caught it.)

Either way, this proves beyond a shadow of a doubt that the shadow in the Nursery scene is a real shadow, not a fake shadow.  And when it comes to Peter Pan’s Flight, the fake shadows are the ones you have to look out for.

There are no fewer than three fake shadows hiding out in Peter Pan’s Flight and most visitors never even realize it.

As the children fly off to Neverland, Peter Pan’s shadow — as well as the shadows of Wendy, Michael, and John — pass in front of the moon. It’s fair to say that everybody knows about these fake shadows. They’re etched into the surface of the moon. 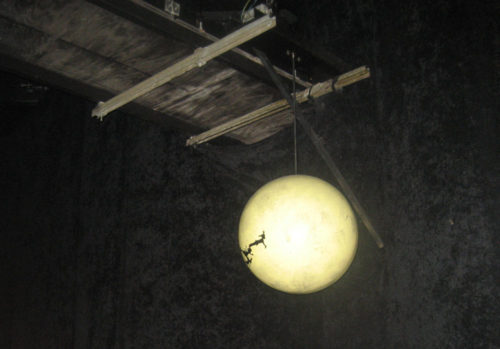 Parkeologists are skilled at many things, but framing photographs is not one of them

The moon itself rotates to give the impression of the shadows flying past. But maybe you already knew about the fake Peter Pan’s shadow and you’re more intrigued by the rickety plywood catwalk and crushed velvet backdrop. Well, that’s why you’re a Disney nerd (hey, so are we).

The next fake shadows are more fun because they’re designed to blend in. Quick science refresher:  What causes a shadow?  Answer:  Evil tree spirits. But also a light source striking an object. The object blocks the light from the area behind it and is said to “cast a shadow” (sort of like how this article is said to “talk down to its audience.”)

So when a “light source,” such as a campfire, strikes an “object,” such as a fat child in a bear suit, that child (in this case, a Lost Boy named Cubby) will “cast” a large “shadow” on a “volcanic mountain,” causing its aluminum foil lining to rupture. 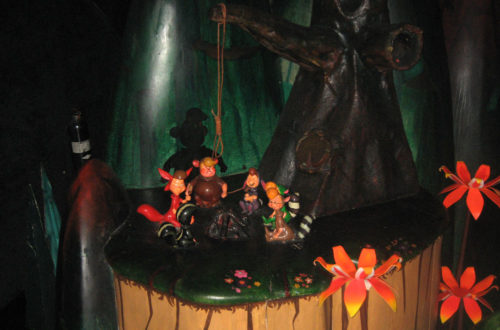 Them Lost Boys look ready for a lynchin’.

“Hey, wait a second!” says the sharp-eyed Peter Pan’s Flight rider. “That campfire ain’t no real light source!” And they are right. The campfire only appears to glow because of blacklight paint. It’s not giving off any real light. So how come Cubby is throwing back a shadow the size of a Yeti Kitty up there? And that kid in the devil suit must be a vampire because he casts no shadow at all! (shut up, I know it’s really a fox costume).

Some savvy Disney designer has actually painted Cubby’s shadow on the mountain, to help sell the idea that the campfire is glowing. Nice bit of detail, that.  Too bad all you Disney nerds are more interested in the fire extinguisher (you can admit it).  Given the scale of the scene, I don’t think Bambi needs to worry about any forest fires with that bad boy hanging around.

After leaving the Lost Boys, we go past the Mermaids. I didn’t spot any sham shadows here. In fact, these are normal mermaids and have absolutely no hidden Disney references at all. 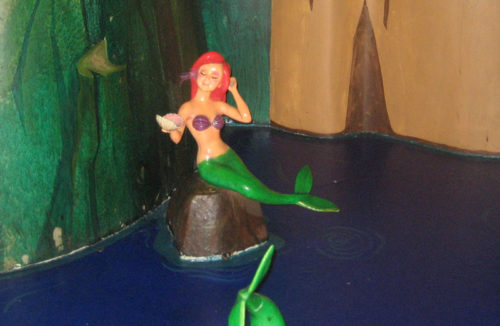 Look at this stuff. Isn’t it neat?

After leaving the Mermaids, we immediately come across the tribe of Indians. And that same wily Disney designer is at it again. More campfires means… more painted shadows! 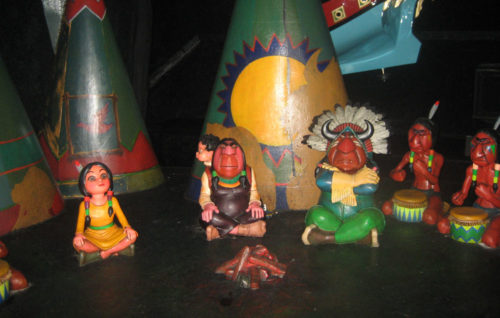 Tiger Lily hates the smell of a campfire.

Three of them, in fact. The Chief gets his own looming shadow. The squaw with the papoose gets hers, and even Tiger Lily has a nice profile with her nose in the air on the other teepee. The chief’s shadow is actually the one that got me interested in tracking down fake shadows in the first place since it stands out the most in normal ride lighting. I only found Tiger Lily’s, the squaw’s, and Cubby’s after some practice.

The cool thing about this one is the logic. Because the campfire is situated in the middle, it would throw shadows in an arc. That’s why it casts Chief’s and Squaw’s shadows directly behind them on the teepee, but throws Tiger Lily’s shadow to the left.

I also like how the papoose is staring right at Tiger Lily’s shadow.  Foreshadowing? (get it??) 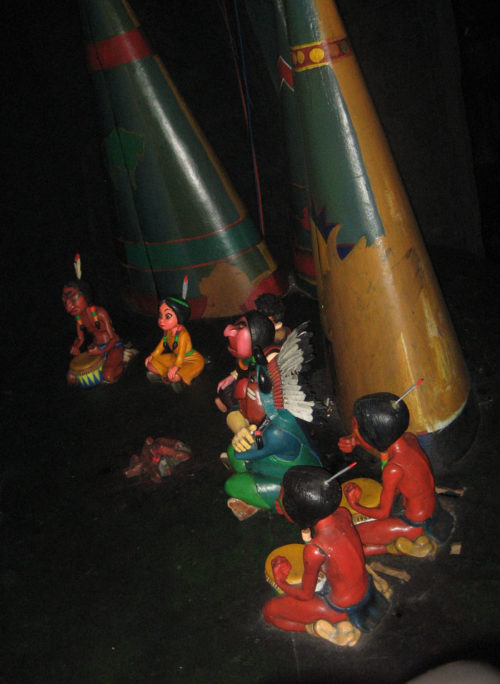 The whole back half of the teepee is a painted shadow

Here’s another angle of the Indians. Kind of cool because you can see that the back half of the Chief’s teepee is completely shadowed, except for a little bit of the red band at the top.  Of course, it also makes it look like someone shot the two drumming braves in the head with arrows, rather than decorated them with feathers.

Perhaps I’ve only scratched the surface. Maybe more fake Peter Pan shadows still exist. Something to keep our eyes open for the next time we go galavanting off to Neverland.