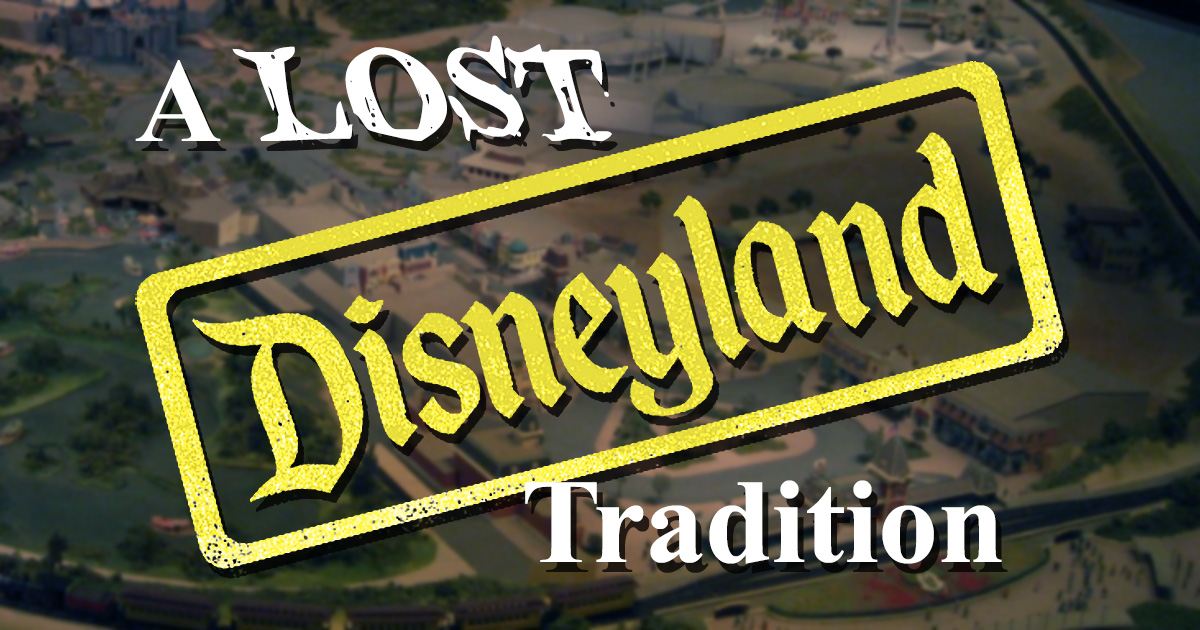 Over the summer, Disneyland quietly eliminated one of its long-standing traditions. It was done in the name of progress. Disney World got rid of it years ago. It was just an operational thing anyway. Nobody cared about the Disneyland re-entry hand stamp.

In our age of biometrics and photo recognition, the Disneyland re-entry hand stamp was a primitive relic of Walt-era main gate loss prevention. And if all that sounds like dry terminology from your MBA class instead of a magical theme park experience, well…

What Was the Disneyland Re-Entry Hand Stamp?

Since the Dawn of Time, caveman lawyers have labeled theme park tickets as non-transferrable.

By the Noon of Time, caveman guests were figuring out sneaky ways to transfer them.

One such method involved a caveman leaving the park and handing his ticket to a cavewoman. She would then re-enter, pretending that she had been there earlier but had just gone back to the cave for a quick mastodon churro.

Flummoxed by this deceitful and unprofitable practice, the caveman lawyers began branding each exiting guest with a hot iron, in order to recognize them upon re-entry. If a cavewoman showed up with a used ticket but without any burning scar tissue, the lawyers would kick her out.

It wasn’t long before the cavewomen were replicating the brands at home and once again subverting the system.

This went on for several millennia until the mid-20th century, when Disneyland finally hit upon the idea of using ultraviolet ink on a rubber stamp. An exiting guest could receive a hand stamp for re-entry on the same day. Yes, it was some Cast Member’s job to stand at the exit terminal and blot the back of your hand like you were an overdue library book.

The stamps were invisible immediately after application. Only by holding your hand under a blacklight at the re-entry turnstile could the secret re-entry code be revealed.

With the advent of digital technology, guest recognition became as simple as taking their picture. In July of 2017, the Disneyland re-entry hand stamp was replaced with a simple photo system.

In Reality, the Disneyland Re-Entry Hand Stamp Was a Form of Magic

Today’s photo technology is ubiquitous, not special. There’s a good chance you’re reading this article because of Facebook (and if you haven’t liked Parkeology yet, what are you waiting for?). Facebook has had facial recognition software for years.

But invisible ink is something straight out of a 1950s Cold War spy story. It’s retro-tech from the Space Age, when every kid wanted to be Nancy Drew or the Hardy Boys, and mysterious gadgets like invisible ink and secret decoder rings were available from shady ads on the backs of comic books. Look no further than Parkeology’s own Johnny Shipwreck novel.

Unless we’re an investigative reporter out to expose substandard hotels or the owner of a rave club, most of us don’t work with blacklight on an everyday basis. It’s silly but mysterious. The domain of spook houses and sideshows.

The true thrill of the Disneyland re-entry hand stamp didn’t come from re-entry. It came later that night — after Main Street had long since turned on its twinkling popcorn lights while the moon bathed the Matterhorn in a preternatural glow.

You would find yourself taking in one more ride — perhaps one of those Fantasyland dark rides which are always so empty towards the end of the night.

There you would be: whisking through Pinocchio’s Daring Journey, listening to those clackety wheels as your car snaked its way along the bus bar — always somehow louder and more primitive at night.

For a brief moment, the blacklight illumination would fall on your wrist and reveal the mysterious message.

That’s a thrill straight out of childhood. And you don’t get it with photo recognition.

Literally the Last Drop of Disney Magic From the Bottle

A couple years ago, I wrote about a few of my traditions on the last day of a Disney vacation. Somehow in that article, I managed to leave out my most personal and enduring ritual.

I think I forgot about it because I’m primarily a Disney World guest. Disneyland trips are infrequent. But whenever I find myself on the West Coast, I fall back on old habits.

On my last day — upon leaving the park for the last time to come back home — I always make a point to get the Disneyland re-entry hand stamp.

It’s a precaution, you know. The plane could break down and I could find myself with another twelve hours to kill. Or what if I lost my wallet and need to make a quick visit to Lost and Found?

But really, it’s symbolic. It means I’ll be back.

Not today. Probably not even this year or the next. But sometime.

And when I return, I want Disneyland to let me back in.