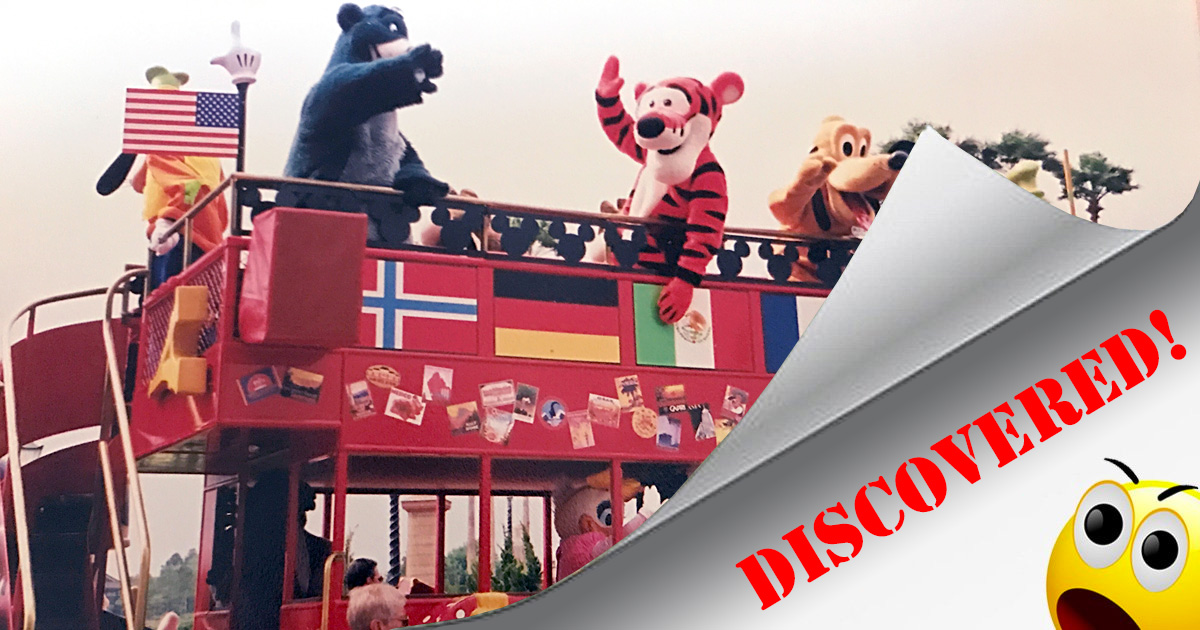 Rides disappear all the time. Some were classics that fans still mourn to this day. The Epcot double-decker bus, however, was not.

In case you don’t remember, the double-decker buses were a motorized option around World Showcase for people who balked at walking a 1.2-mile loop. My old Birnbaum’s Guide from 1994 shows bus stops at Norway, Italy, France, and Canada. Was the Epcot double-decker bus an official ride or merely transportation? Had we invented WDW47 30 years ago, it would have been a tough call.

By Epcot’s next decade, they had abandoned the transportation idea, opting instead for something called Characters on Holiday. All your favorites like Prince John and Geppetto would pack onto the bus like a roving band of tourists, making short stops for photos before piling back on to explore the next country. It was basically the character version of every cruise line shore excursion you’ve ever taken.

It so happens that my sister is a former “friend of Meeko,” and she worked the character show on occasion. It’s the only reason why I have these pictures. As you can see, there wasn’t much to it.

By the mid-2000s, Epcot had started finding more permanent locations for Disney characters. As World Showcase became more and more crowded with festival booths and actual tourists, they discontinued the Characters on Holiday show.

Nobody cared. While the characters were fun, guests weren’t planning their day around Mr. Smee on the back of a double-decker bus. The buses became one more lost Walt Disney World memory.

A few miles away from Walt Disney World lies a sleepy little former cow town whimsically called Kissimmee. It’s home to the 192 corridor — a strip of tourist traps and tacky souvenir shots ripped straight from the pages of Disney World’s 1970s heyday. But downtown Kissimmee hearkens back to an earlier time, before the Mouse arrived on the scene. It feels a land apart from the tourist areas just a few blocks away.

The downtown area is a collection of charming shops and restaurants like the 3 Sisters Speakeasy. It’s also where I happen to go to church — which is why I found myself driving down Broadway at 9:30 on a Sunday morning.

Parked in the lot across from the 3 Sisters was an old vehicle. It was red, with HISTORIC DOWNTOWN KISSIMMEE emblazoned on the side. It also had the logo for the 3 Sisters and a big FOLLOW ME TO FOOD DRINKS FUN on the back. Obviously they use it as some kind of moving billboard.

But more important than all that… It was a double-decker bus.

I immediately hit the brakes.

I’ve probably driven past it a few dozen times before and never thought anything of it. But it just so happens that I had included the Epcot double-decker bus as part of Parkeology’s 35 Freaky Flashbacks that very same day. It was fresh in my mind.

I got out of the car.

It certainly looked familiar. An old-timey red bus with a stairway in the back leading to the upper deck. Up close, it did not appear especially well-maintained. There were no Mickey Glove hubcaps — just bare yellow wheels — but my son observed pockmarks in the panels, perhaps bolt-holes from comically oversized luggage ornaments once fastened to the side.

An even greater giveaway was the array of plywood flags encircling the top deck — faded, but unmistakably the banners of Norway and Germany, Canada and Mexico.

No question about it. Here was the Epcot double-decker bus from Characters on Holiday. A little worse for wear, with some added stencil work and a strand of Christmas lights strung along the top rail. Yesterland listed the bus for sale way back in 2011. Apparently the 3 Sisters saw an offer they couldn’t refuse.

I have no idea if they still drive the bus around Kissimmee today. The interior seemed pretty worn, with lots of exposed wiring and unfinished benches. In researching this post, I came across a Google Streetview of the Speakeasy, which clearly shows the bus parked in front, as if waiting for Brer Bear and Meeko to finish their meal.

There’s nothing announcing this as a former Disney ride. Minus the World Showcase context, even the flags just look like generic decorations. But I did discover one small detail that sent a little chill up my spine. A simple stamp on the engine grill. A sign forever marking this as the Epcot double-decker bus.

If you ever happen to find yourself in downtown Kissimmee, keep your eyes peeled for this lost piece of Disney World history.

Parkeology began because we love exploring lost park history, wandering through ruins and seeking old relics like a geeky version of Indiana Jones.

If you’re interested in some of our favorite obscure treasure hunts over the years, check out our discovery of the Sunset Ranch windmill, the doomed expedition to locate the Disney Institute Climbing Wall, and the unsolved mystery of the Sunken Island.