“In a single day and night of misfortune, Atlantis disappeared into the depths of the sea.”

Thus said Plato, early Greek philosopher and inventor of sculptable mud for children. It might just as well refer to Discovery Island, Disney’s long-abandoned zoological park in the middle of Bay Lake. Nothing of worth remains, except for an ugly dock and some rotting boardwalks. The same might be said of New Jersey.

We’ve been fascinated with lost islands recently, but Discovery Island is the most well-known among parkeologists. An entire hard-ticket experience shuttered completely and left to the ravages of nature. It’s unprecedented (okay, River Country, it’s not). It’s easy to forget that Discovery Island itself replaced Treasure Island, which was perhaps a more interesting idea, but not very well suited for bird shows and Florida swamp walks.

In the 1960 film Swiss Family Robinson (which produced the single greatest attraction in the history of Disney theme parks), the Robinson family stares with sadness at their shipwrecked vessel. “Maybe we can find some way to fix her up. Make her sail again,” says teenage son Ernest. “She’ll never sail again,” returns older brother Fritz. It is much the same with Discovery Island. Rumors sometimes pop up (my favorite was an expensive transformation into the island from LOST), but Discovery Island is probably destined to remain an impenetrable jungle. At least it’s name lives on, over at Disney’s Animal Kingdom.

But unless you have a Genesis Device, you cannot create something from nothingness. In order for Discovery Island to live, something else has to die. That something else turned out to be one of Animal Kingdom’s opening-day lands, a little place called Safari Village.

We’ve covered these types of Disney name changes before, and just like all those other examples, this one changed nothing. Safari Village was nothing more than the cluster of shops, food booths, and service areas surrounding the Tree of Life — which were all still around when Discovery Island moved in and claimed this land in the name of King Eisner. They swapped out some signage, reprinted the guide maps, and boom! Discovery Island was back in business. 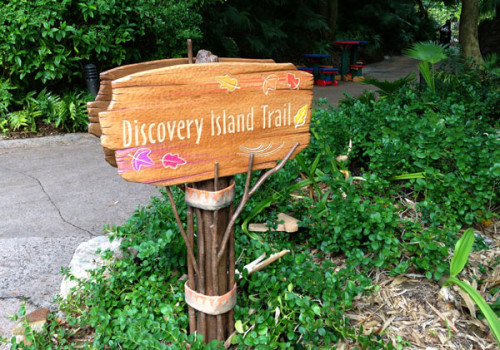 This sign is actually new, and is quite well done. It’s on the West side heading back towards Africa.

One might argue that Discovery Island had two advantages over Safari Village. 1) the land really was an island. 2) The Safari was not in this land. So it made things a little more clear. Because the theme didn’t really change, this incarnation of Discovery Island is a little more “party” than “adventure,” owing to the bright colors and stylized architecture. The Cast Members all wear some version of a Hawaiian shirt and the music is a mixture of steel drums and rain forest flutes. The Jammin’ Jungle Parade encircles Discovery Island daily.

Discovery Island can also be a bit of an exclusive place. Walk around for five minutes, and you’ll find all sorts of places you’re not allowed to go. Whether it’s a backstage portal to Cast Member facilities, access to animal enclosures, or simply a restaurant kitchen, Discovery Island makes it a point to tell you that this area is off limits. Well, they’re not so unfriendly as that. They do it the Disney way: 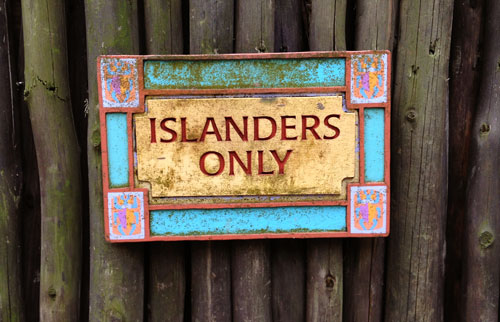 If you are visiting from Jamaica, just walk on through.

Like I said, these things pop up everywhere in the land. 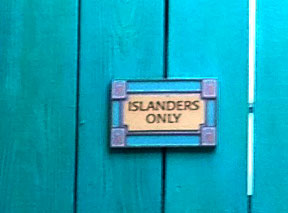 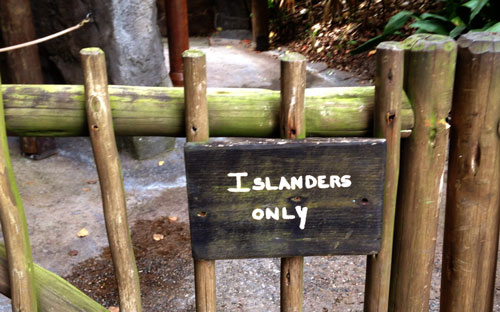 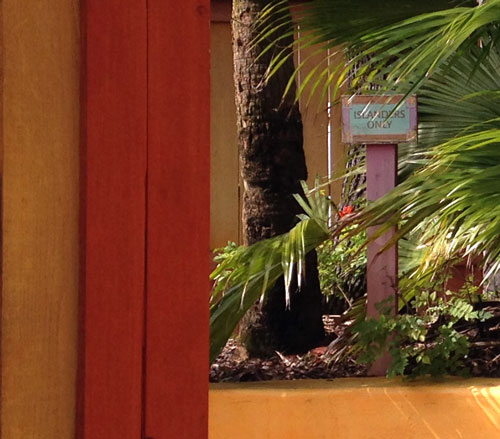 Why do I get the feeling they don’t want me here?

It’s actually a lot of signage to keep track of. I remember being fascinated a few years back when Disney MGM Studios changed to Disney’s Hollywood Studios. I wondered how the project managers figured out all the places that needed to change. It wasn’t just the park itself. It was all the road signs, the literature at the hotels, merchandise logos, etc. I remember seeing an out-of-the-way sign on that walkway from Boardwalk to the Studios and wondering how they remembered to switch that one. Do they keep a big list of all these signs on the off-chance that someone has to go change them later? Or do they just send the project team out into all corners of the property and hope they find them all?

I’m sure that changing Safari Village into Discovery Island didn’t have the same scope as an entire theme park renaming project. It’s not like there were “Safari Village” t-shirts being sold, or bus stops to Safari Village. You get the guide maps fixed, and the in-park signs, and you’re done. They’ll have to do the same thing for Camp Minnie-Mickey, when it becomes Pandora.

But know this: Beneath Discovery Island, there once lived a thriving culture known as Safari Village, whose inhabitants are lost to this day. Like Atlantis, Safari Village has disappeared… Or has it?

The other day I found myself on the path leading to Camp Minnie-Mickey. The bridge is boarded off now. Avatar is coming. All that’s over there now is the smoking section and a seldom used seating area for Pizzafari. They have a little rotunda there that was closed off inside, since the crowds didn’t warrant all the cleaning and staff they would need to maintain it. 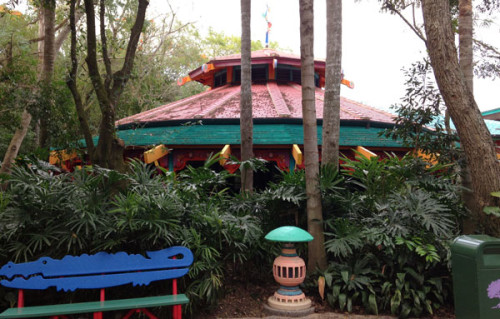 It’s encircled by an outdoor porch with tables, which was not closed off, but of course nobody was eating back there. As I wound around that porch, I found myself on the back side of Pizzafari. Nothing but trash cans and a few Emergency Exit doors leading back into the restaurant. 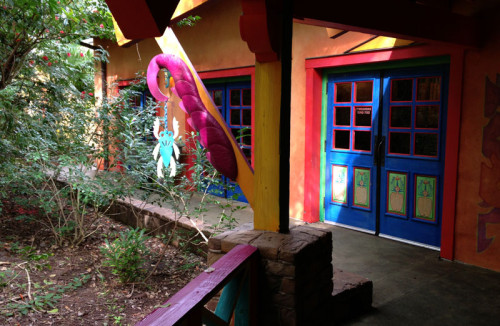 The moment you’ve been waiting for. The back side of pizza!

I walked all the way up the side of the building until I could go no further. The points beyond were backstage areas. I knew because of the sign: 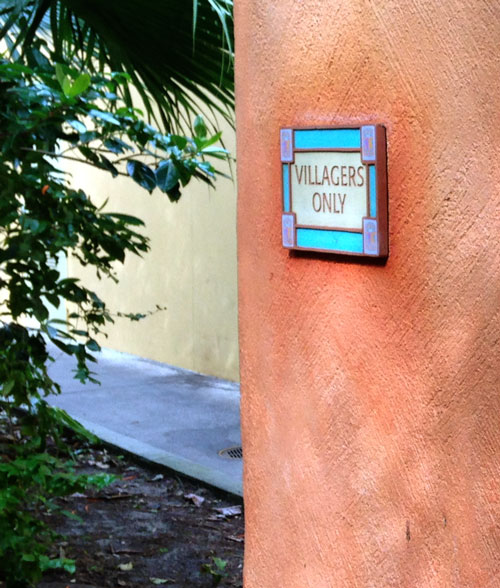