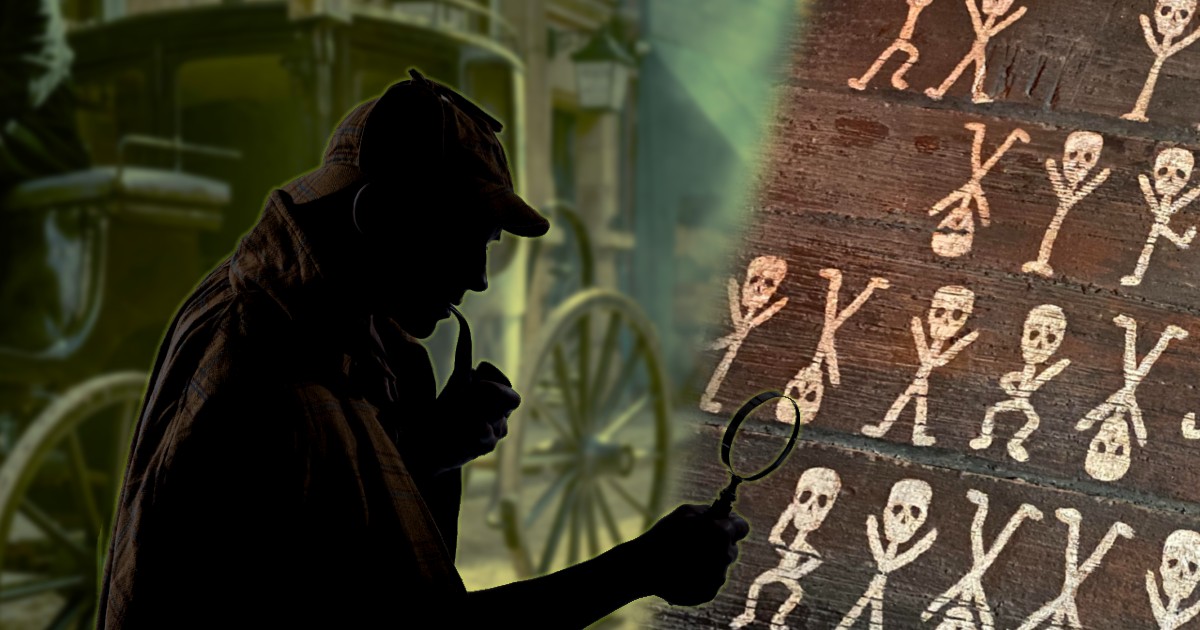 It was the year 2018 when I first became aware of a strange riddle hidden in the caves of Pirate’s Lair on Tom Sawyer Island.

My practice had me tending to a little matter in New Orleans Square, where a patient of mine had been suffering from optical delusions. My journey led me across Baker Street, and I decided on a whim to pay Sherlock Holmes a visit. It had been many months since I our last encounter. It came as no surprise to learn that he had been buried in his books for the better part of three weeks, puzzling over an incomprehensible cipher.

As always, there was little time for pleasantries with Holmes. He at once produced a sketch of several hand-drawn skeletal figures in various poses and stared keenly at me, as if I might solve the riddle for him on the spot.

“What are we to make of this?” I said, marveling at the crude dancing bones.

“It was discovered in the shipwreck area of Pirate’s Lair on Tom Sawyer Island,” said Holmes. “Painted on the inside of the ship at the end of the caves. It has been there these last eleven years, so I deduce.”

“Elementary, my dear Watson. The wreck of a pirate galleon would scarcely fit within the theme of Mark Twain’s classic tale of Tom Sawyer. It is much more suitable to the pirate overlay that occurred during the Jack Sparrow obsession of 2007.”

“A clever picture,” I said. “Though its meaning is, I’m afraid, rather incomprehensible. Could each of these skeletons represent a member of the pirate crew?”

Holmes frowned. “Its meaning is quite clear. But the answer to its question is another matter entirely.”

He stood up and began rummaging through some papers stacked on his desk. Meanwhile I continued to study the baffling series of dead men’s bones.

“My good Doctor, you yourself chronicled a similar riddle in The Adventure of the Dancing Men! Have you forgotten your own tale already?”

Holmes produced a copy of my old manuscript. Now that he mentioned it, I remembered the case well. Holmes had deciphered a series of stick figures in various poses. Each pose had represented a letter of the alphabet. By translating the figures into letters, and then applying a simple substitution cipher, the message had been revealed.

As I looked more closely at the skeleton code from the Pirate’s Lair on Tom Sawyer Island, I saw at once what Holmes meant. While many of the poses were unique, there were several that were identical. Those must represent repetitions of the same letter.

“I propose a method for cracking this code,” I said. “Let us transcribe each pose into a unique letter of the English alphabet, then commence to deciphering from there.”

Holmes blithely produced a sheet of paper using the exact method I had described.

“Well done, Holmes!” I cried. “Now let us see. Note double-A and double-K in words 5 and 7. Those would correspond closely to double letters that occur frequently in real English. For example, there are many letters with double-T’s. Like the word ‘letter’ itself. And of course, double-E is also very frequent, occuring in words like ‘fleece,’ ‘bees’, and ‘three.'”

“I’ll save you the tedium, Watson. There are websites that can solve such simple substitution ciphers in seconds.”

Firing up his old laptop, Holmes quickly typed in the series of strange letters. It was not long before the computer had spit out an answer. Though the grammar left something to be desired.

“Are we sure this is the right translation?” I said with a frown.

“Undoubtedly,” Holmes replied. “The linguistic nature reflects the colloquial tongue of a common pirate. The use of ‘Be’ instead of the more proper ‘has.’ The dropped G in ‘having.’ These are common in piratespeak.”

“So this was intentional. An artful flourish left behind by some Imagineer to reinforce the pirate theme when the caves on Pirate’s Lair on Tom Sawyer Island were redesigned.”

“An artful flourish?” Holmes replied. “Or more precisely, a clue to some other secret. But to what, I cannot yet surmise.”

“Yes, most puzzling. It implies a question. And the answer to that question will have three identical letters. But without the question, I’m afraid we are in the dark.”

“Indeed,” said Holmes. Here he lit his pipe and set to smoking, in that ponderous way I knew so well.

“Could it be,” I ventured after a time, “that the question itself is also somewhere on Tom Sawyer Island? Perhaps somewhere else in the shipwreck cave?”

Holmes leapt to his feet.

“My dear Watson! That is precisely what we must discover. The game is afoot! Come, let us fetch a map.”

The evening had turned gloomy by the time Holmes and I arrived via raft on Tom Sawyer Island. A low fog hung over the Rivers of America. And my troubled imagination could not help but hear the Hound of the Baskervilles howling from the Haunted Mansion across the way.

“We can obviously eliminate the back half of the island. It was mostly untouched by the refurbishment in 2007. Likewise anything associated with Tom and Huck. And we will forego the Blacksmith shop as well. Will Turner was unaware of his pirate origins during his smithing days.”

“Holmes, you are a wonder,” I breathed.

“It is simple deduction,” replied he. “We shall concentrate our efforts on the caves of Dead Man’s Grotto. It received many pirate themed additions and thus is a good candidate for finding the question we seek.”

Lighting a lantern, Holmes proceeded to the south side of the island and led me into the spooky caverns. We passed the pulsating heart of Davy Jones and ventured deeper into the caves. Presently we happened upon a message scrawled on the wall of the cave. Though our light was dim, we could just make it out.

“We pirates face a sea of troubles. Our dying breaths are only…”

The scrawl was unfinished. Perhaps its author had himself already expired.

“This can’t be related to our dancing skeletons,” I said. “For one thing, it is not a question.”

“Ah hah!” said Holmes. “But it does have a vexing ending. I think we have solved the riddle, my good doctor.”

“I cannot see how,” I replied.

“It is elementary. Notice the rhythm of the phrase. We pirates face a sea of troubles. It stands to reason that the next part of the inscription is a rhyme. And a clever one at that.”

“Our dying breaths are only…?”

“Bubbles!” Holmes exhorted. “A sea of troubles would send the pirate down to Davy Jones. And as he drowned in the clutches of that wicked fate, his last breath would ascend to the surface as naught but bubbles.”

“I see it now,” I replied. “A jolly good rhyme and a fun discovery. But are you sure this this relates to our dancing skeletons?”

“Each answer be havin’ three identical letters. Such is the case with the word ‘bubbles.’ There are three B’s. We can therefore be most assured that we have solved it.”

Back to Baker Street

Holmes and I returned to 221B Baker Street, where I collected my things and bid my good friend farewell. But as I was about to depart, I saw a troubled look pass over his face.

“You’ve thought of something else,” I noted.

Holmes sighed. “I fear there may be more to this riddle. We have discovered one possible answer. But there must be others. The dancing skeletons said ‘each’ answer would have three identical letters. Not just a single answer.”

“Most curious,” I said. “But surely there cannot be other such riddles hidden on Pirate’s Lair on Tom Sawyer Island!”

“NoNseNse,” Holmes replied. “I have DeDuceD that it is a sTaTisTical likelihood, and fuRtheRmoRe, it is IdIotIc to think otherwise. Given this prOtOcOl, I am AdAmAnt that such must be the case.”

“What makes you say that?” I GiGGled.