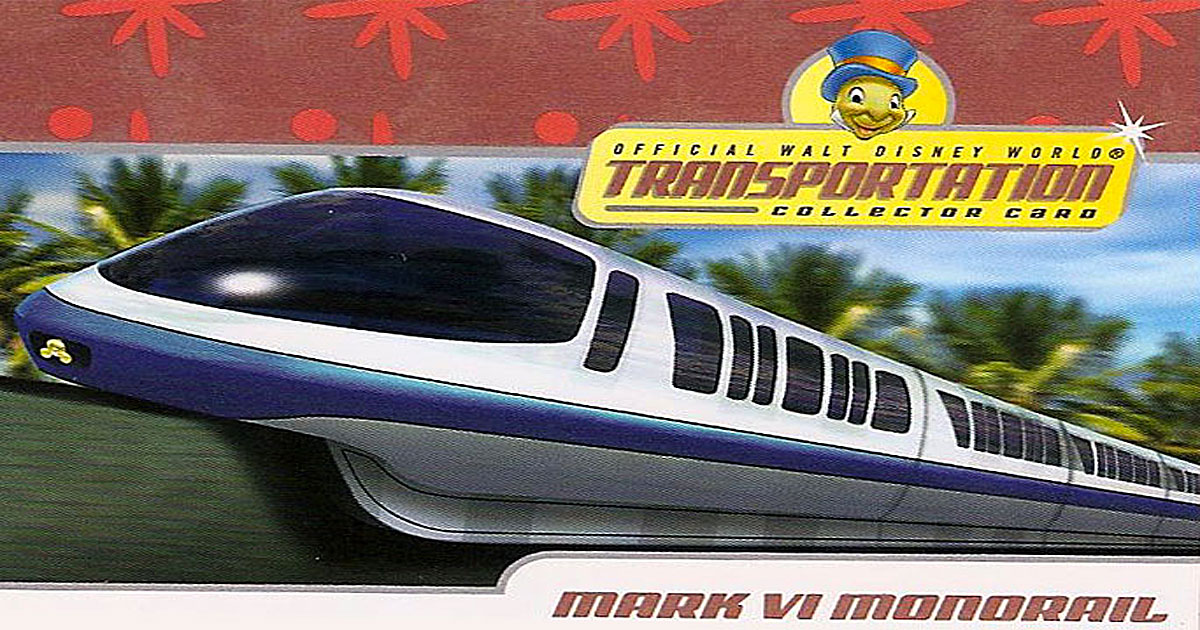 Sometimes the most trivial items can take hold of a man’s fascination and drive him deeper and deeper into new levels of obsession. Case in point: I have recently obtained an Official Walt Disney World Transportation Collector Card during a trip to the Magic Kingdom.

I have visited the Magic Kingdom in all the decades of its existence, and not once have I ever been offered an Official Walt Disney World Transportation Collector Card. I never even knew they existed.

It wasn’t until I finally had a child in tow that an attendant approached us and secretly offered us two of these priceless relics for free!

My 2-year-old promptly obliterated one of them, but I salvaged the second one.

I was prepared to pass it off as nothing more than those silly little “Magical Moments” they like to give to kids. A chance to distract kids with bright pictures while waiting for mundane things like riding the monorail or failing the height stick. They’re cheap bits of fluff designed to hold attention for approximately 58.4 seconds and then are quickly disposed of.

Forget the Mickey stickers that are distributed from every corner like gateway drugs. My son has received a lame Autopia driver’s license, a monorail pilot’s license, a whole bunch of crap from Innoventions, and even a “Compensatory Star Tours FastPass for your Entire Family When You Finally Grow A Few More Inches.”

I can imagine the moms and dads of America finding this stuff wadded into the crevasses of their suitcase the next time they pull out the luggage for a family trip. It probably garners a brief nostalgic memory of their Disney trip eight months ago. And then gets promptly tossed in the garbage.

I took the card and marveled at Disney’s assumption that anyone (even a 2-year-old who can’t read) would think a Walt Disney World Transportation Collector Card was even going to cause a blip in the attention radar. Then I turned it over to read the back.

There is absolutely nothing of interest here to fans. Even if you didn’t know the maximum speed of a Walt Disney World monorail, did you really care? And who doesn’t know who Jiminy Cricket is? I admit the Pinocchio Village Haus Hidden Mickey fact is okay, but you wouldn’t rush straight there to hunt for it. The card is a bit of garbage, just as we thought.

I stopped and re-read it. This isn’t just a bit of monorail fluff. This is one of an entire series. A series of collectible cards built around the Walt Disney World transportation system! Somebody sat down and painstakingly designed the entire set.

…Distributed it to various modes of transportation around property.

Our brains are trained to ignore this stuff. Through experience and societal evolution, we have built-in filters that send this kind of manufactured puffery right past our logic circuits and into the garbage disposal. But if you give logic a chance, it can sometimes blow your mind.

Think about it. Can you even name 25 different modes of Walt Disney World transportation? Monorail, bus, tram, ferry, boat… seriously, I’m running out now. I guess you could start splitting the boats out into different styles. The smaller launches that service Polynesian Village and Grand Floridian. The Friendships at the Epcot resort. Maybe Magical Express gets its own card.

Yet some evil genius not only came up with 25 modes of transportation, he planted collectible cards at each one of them all over the property. A game about the most boring aspect of a Walt Disney World vacation. Unadvertised. Available only to cute toddlers. When the attendants don’t have anything better to do. An audience that has no concept of just how logically confounding these items are that they hold in their grubby little hands.

Now that I know these other 24 Walt Disney World Transportation Collector Cards exist, there’s a part of me that’s obsessed with finding them. What if there are modes of transportation that I never knew existed! What if this is like Scientology, where only the Level Five fans get to use the Blizzard Beach pack mules or the Disney Springs transporter room? Are there Freemasons hang-gliding off the Contemporary rooftop as we speak?

It’s like stumbling onto an entire Da Vinci code treasure hunt, buried in the unassuming transportation infrastructure of a massive resort complex.

The quest is on, ladies and gentlemen. And in this short of a race, there’s no prize for finishing second. I will solve this puzzle through the sheer power of my own magnificent brain. Forget those complete sets of Sorcerers of the Magic Kingdom spell cards. Those things can be had for mere hundreds on eBay. But a complete set of Walt Disney World Transportation collector cards?

You can’t put a value on that.