I suppose this is a sad week. After 15 years, we finally say goodbye to Test Track, the “first Epcot thrill ride” if you pretend Body Wars didn’t exist. It ushered in a new era of awesomeness that finally pushed Epcot past those pesky elaborate animatronic epics. Test Track 2.0 may rock a sleek, Tron-esque look and bucketfuls of that “interactivity” buzzword, but nothing beats a checkered yellow-and-black design motif, plywood hill climbs, and those heat lamps in June.

As you can tell, I admire Test Track 1.0 as the absolute pinnacle in park attractions based on a corporation’s Quality Assurance department. And while I embrace TT2.0 with open arms, at least one life-long dream has died this week, because I no longer see any realistic chance of seeing the following in a Disney park ever again: 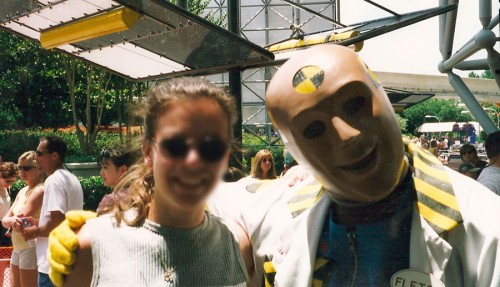 “I want to play a game,” the thing intoned.

In case you don’t know (though I don’t possibly see how you can’t), that is a Crash Test Dummy named Fletch, and yes, you can see the gates of Hell if you stare long enough into his lifeless eyes.

Fletch was an actual walk-around character appearing in Test Track’s early years. You can tell by the lab coat that he is one of the smarter Dummies. Probably an office drone. It’s not often that you can get your picture with a real live test subject, especially one about to be scattered over a roadway. The best analogy I can think of is if Mission:Space suddenly announced a meet-and-greet with Laika the Soviet Space Dog.

I think there was one other test dummy out and about at the time this pic was taken. I unfortunately do not remember his/her name. Now that I think about it, Disney showed amazing restraint by naming this dummy “Fletch.” Knowing their propensity for jokey names, I’m surprised they didn’t go with something like “Hertz” or “Gurney” or “Lawsoot.”

But with the Test Track emphasis moving towards “Vehicular Design” and away from “Vehicular Body Mangling,” it’s unlikely Fletch will ever make the rounds again. I will have to be satisfied with his occasional visit to my nightmares, where his soul-less gaze holds sway over all the land, until there is only Fletch, and Fletch is you. And Fletch owns you. And Fletch rules all. All hail Fletch. 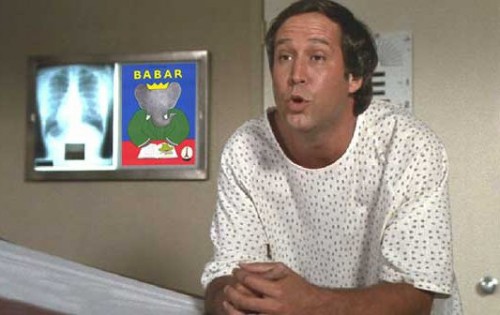 And then the nightmare ends with an uncomfortable rendition of “Moon River.”