Last week we embarked on a different trip through the parks: The Opening Day Tour. We started with the opening of Disney’s Animal Kingdom, but today, our time machine is rotating backwards to a magical land of mullets and bangs. Get ready to visit all that remains of the Disney MGM Studios Opening Day Attractions. 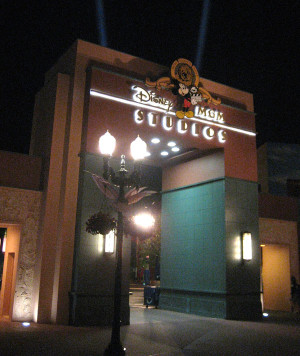 This place is so old, even the name is gone.

The Disney MGM Studios (now called Disney’s Hollywood Studios) was announced shortly after Universal Studios, but it managed to open a full year before. That’s quite a reversal from today, where we wait half a decade for a Seven Dwarfs coaster to appear while Universal rattles off Harry Potter Land 2 in the span of a few months. In 1989, there was a grand total of six Disney MGM Studios Opening Day attractions.

Whoa — and you thought Animal Kingdom was light on rides!

The count is a little misleading. Many of the Disney MGM Studios Opening Day attractions were among the longest in Disney history. And let’s not forget about all those celebrities you were bound to see, what with all the actual movies being filmed there. Or, er, credit scenes of sitcoms.

Let’s see how much has changed in 25 years. 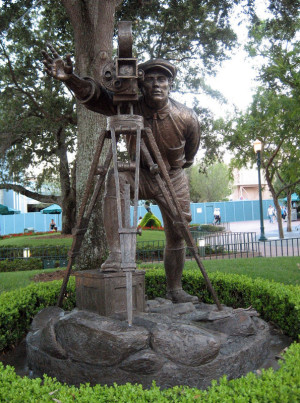 This guy has been directing the same shot for decades.

You can forget about this one. Pretty much everyone else has. It was a live theater thing that didn’t even last the year. By August it was gone, and the theater spent the next several months in the dark, gearing up for a Dick Tracy show.

The Theater of the Stars actually used to be very close to the Brown Derby and made up one ear of the largest Hidden Mickey on property. Check out early guide maps if you want to see it. Parts of the giant Micky are still there today, including Echo Lake (right ear) and different colored pavement that forms Mickey’s eyes. It wasn’t until Sunset Boulevard was constructed in the mid-1990s that the theater moved to its current location down near Tower of Terror.

The Backstage Studio Tour featured both a walking and a riding portion, just as it does today. But today’s tour is a shadow of its former self. The tram has nothing to visit now except Catastrophe Canyon (still identical to its opening day incarnation). The rest of the backlot is gone, though many of the boneyard props are still scattered about (and look exactly as if they’ve been sitting in the Florida sun since 1989).

The tram will still take you on a big loop, but there’s nothing to see except the Lights Motors Action theater and a topiary of the Earful Tower. Remember that back when the Disney MGM Studios first opened, New York Street was considered a live set. Guests were prohibited from walking the street! 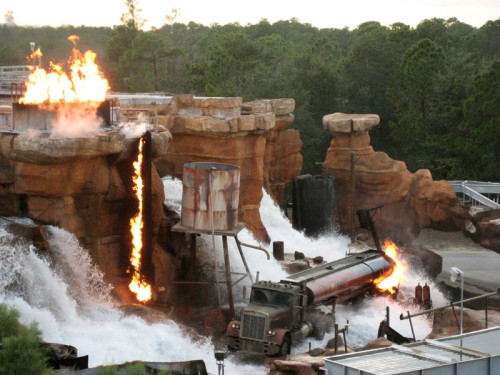 Mojave Oil has caused more disasters than all their competitors combined.

The walking tour portion involved the water tank, still in use today. It even used the big dump tank with the wheelhouse, which was a much more personal sea-captain-in-a-storm scene than today’s Pearl Harbor Attack. The walking tour used to continue through a series of soundstage corridors with various celebrity guides, culminating in the Walt Disney Theater for a look at upcoming Disney movies. The same theater is now used for One Man’s Dream. At least some of the sound stages have been eaten up by Toy Story Mania.

The Magic of Disney Animation

The Animation Tour is also a shadow of its former self. Gone is the Back to Neverland charm-fest with Robin Williams and Walter Cronkite. Now we get a forced interaction between Mushu and a Cast Member pretending to be an animator. And there’s no longer any actual Animation Studio. Just Mickey meet-and-greets and tired interactive games.

Incidentally, it’s a shame we are focusing on Disney MGM Studios Opening Day attractions and not Opening Year because two more major attractions were added to towards the end of 1989. Indiana Jones Epic Stunt Spectacular debuted in August, and the show is still running strong. Though its script has changed over the years, most of the same elements are still intact.

Star Tours opened in November 1989, but has changed drastically since then.

Over on Echo Lake, we had Martin Short and Chevy Chase starring in the Monster Sound Show — which had the distinction of being the first Disney MGM Studios opening day attraction to disappear completely (except maybe that Hollywood show).

They tried to keep the same gag going, with a sound effects show based on the Disney TV cartoons — and then later with a stereophonic sound demonstration starring Drew Carrey. But that theater is empty now, only used on special days like Star Wars Weekends.

Next door to the Monster Sound Show was SuperStar Television, which introduced guests to the magic of the green screen. The shtick grew tired and it was junked in favor of Doug Live, a live action show based on a forgettable cartoon character. Then it sat empty for many years until it was reborn as the American Idol Experience.

All is not lost, Time Travelers! You still have the Great Movie Ride, which is as close as you’re going to get to a Disney MGM Studios Opening Day attraction from 1989.

Let’s face it. The script has changed and the ending montage has added a few different clips — but honestly, it’s not that different.You still have virtually all the same scenes, right down to the shoot-outs with cowboys and gangsters. Even the same trailers are playing in the queue (and the print looks like it hasn’t been replaced in 25 years). 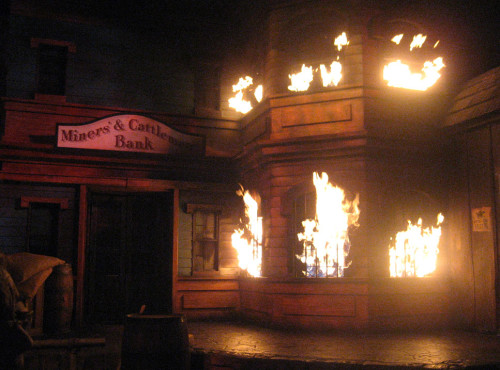 The rare cowboy scene — brought to you by Mojave Oil.

25 years is a long time. It’s amazing that we have any Disney MGM Studios Opening Day attractions still look basically the same as they did a quarter of a century ago. But our journey isn’t over.

Let’s rewind the 1980s even more. EPCOT Center awaits. Could there possibly be anything left from 1982?