Go to Disney parks long enough and you’ll turn into a Time Traveller. Everything was better the way it was before. Spaceship Earth was better with Walter Cronkite. Space Mountain was darker before they added Slater and Howie Mandel to the queue. Lines moved faster before FastPass. 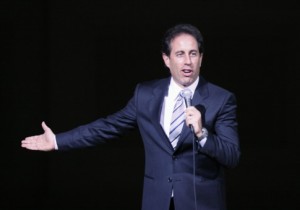 And what’s the deal with the food? Theme parks should serve hamburgers and hotdogs. I don’t need a vegan hummus sprout wrap with edamame sauce and a side of zucchini sticks.

Eventually, you’ll start seeking out those small corners of the parks that remain untouched by the hand of time. It’s why an inexplicable number of people claim to love Carousel of Progress, in spite of the fact that it is embarassing, cringe-worthy, and has no business being in a 21st century theme park, much less someplace called Tomorrowland. It’s not even Walt’s show, people! His was much more sexist.

But I get it. It’s nostalgia. I do it myself. Because there is a part of us that knows that even if the past ain’t perfect, it’s still better than Stitch. Or Idle. Or Idol.

Or, for instance, better than this: 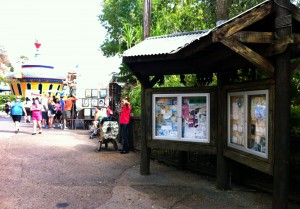 Even washed out in the background, Dinorama is ugly.

A brilliant yellow mechanical top looms in the distance of your quaint archeological dig site.  Far off are the sounds of carnival barkers and the smell of asphalt. And what’s that? A poorly stitched plush dinosaur, yours for the taking if you are one of those rare people that can shoot an oversized basketball at an undersized rim. Child please.

But right under your nose, in that very same shot above, time travel awaits.

It’s the bulletin board. A bit of throwaway theming, I guess, for the Dinoland grad students, to keep them apprised of the daily events at the dig. Sort of like summer camp, I guess. Did they have bulletin boards at summer camp? I mainly remember a lot of mosquitos and humiliating rituals.

We must have walked past that thing a million times in our efforts to score a Primeval Whirl FastPass (I’m being facetious; hopefully nobody out there wastes their FastPasses on Primeval Whirl). If you notice it all, it’s probably because of its one obvious quality. Shade.

On a whim, I decided to actually stop and read the billboard. To my shock, I discovered this: 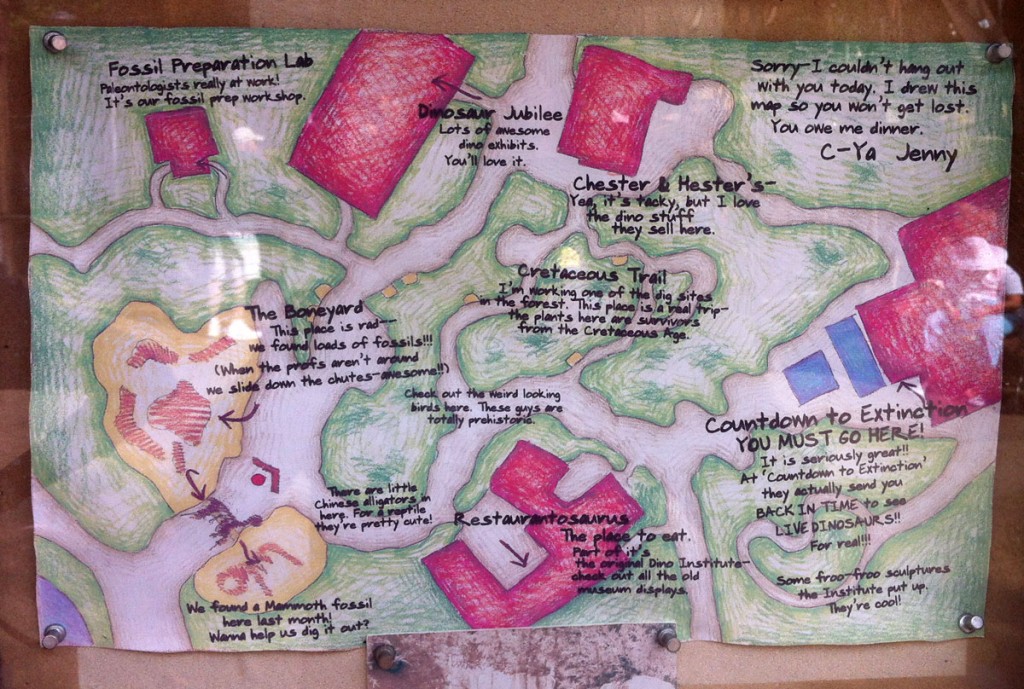 It’s a crayon drawing of Dinoland, written by “Jenny,” who is apparently one of the archeologists. She is tall, like a model, with medium length blonde hair which she wears in a pony tail, giving her a sort of tomboy appearance, but it can’t hide her startling good looks. Her legs are tan from digging in the sun, and her teeth sparkle like a velociraptor’s smile. Anyway, that’s how I imagine her.

Weird looking birds at the start of the Cretaceous Trail? Those things are long extinct. And what’s that I see in the upper left? Not Dinorama, but the Fossil Preparation Lab, original home to Sue the Tyranosaurus skeleton, and the Dinosaur-freakin’-Jubilee, beloved by parkeologists everywhere!

This is Dinoland as it existed in 1998. As in Opening Day. As in We’ve Run Out Of Budget For Real Attractions. Today it’s hard to find anybody who even remembers the Dinosaur Jubilee, but Jenny does. And I love her for it.

The treasures on this bulletin board don’t stop with the map. There’s a whole slew of other time travel ephemera: 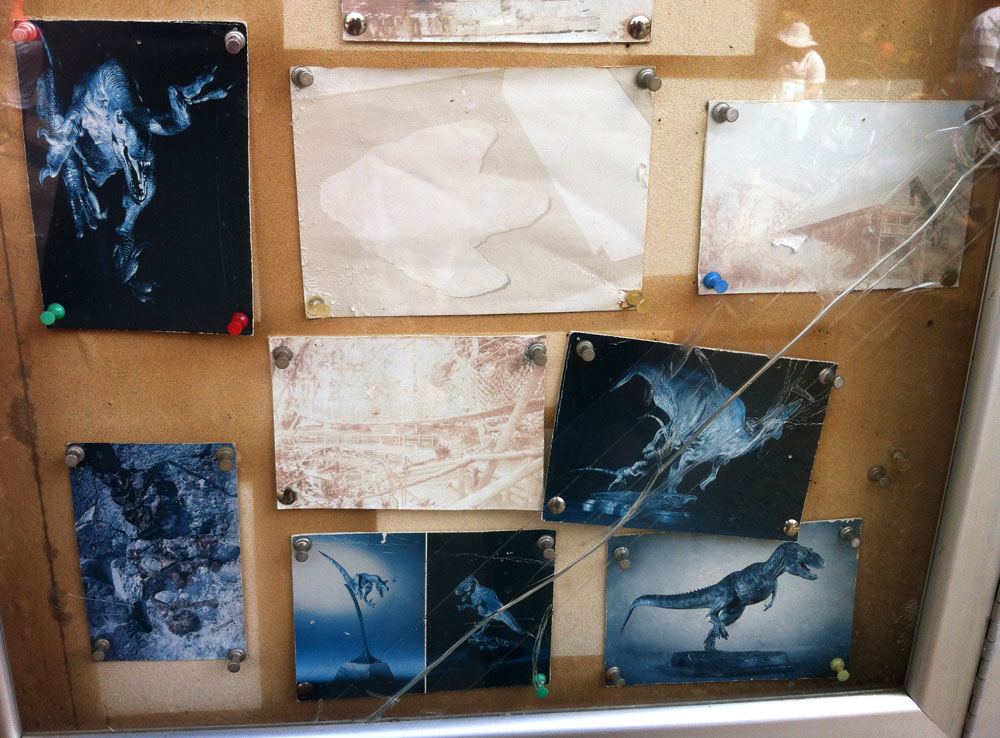 The dinosaurs left behind wondrous sculptures of themselves

These are some random photographs of dinosaur sculptures, and you really have to admire the sculptor who got the dinosaurs to remain still for so long in that pose. They’re pretty cool, but if you’re familiar at all with the Dinosaur overflow queue, you know exactly what these are. These are either Imagineering study models, or the actual sculptures before they were installed. There’s a few faded photographs of buildings as well. That one in the center (below the footprint) is particularly intriguing. 10 points to the first person who correctly identifies it.

So yeah, when you get down to it, it’s just a bulletin board. But a pretty cool one. If you stand and look at it head on, so that your peripheral vision doesn’t catch Dinorama, and if you plug your ears and hold your breath, you can almost imagine that you’re back in the 90s, when Dinosaurs roamed the park, desperately searching for more rides so they could feel like they got their money’s worth.

Bulletin boards were so much better then.