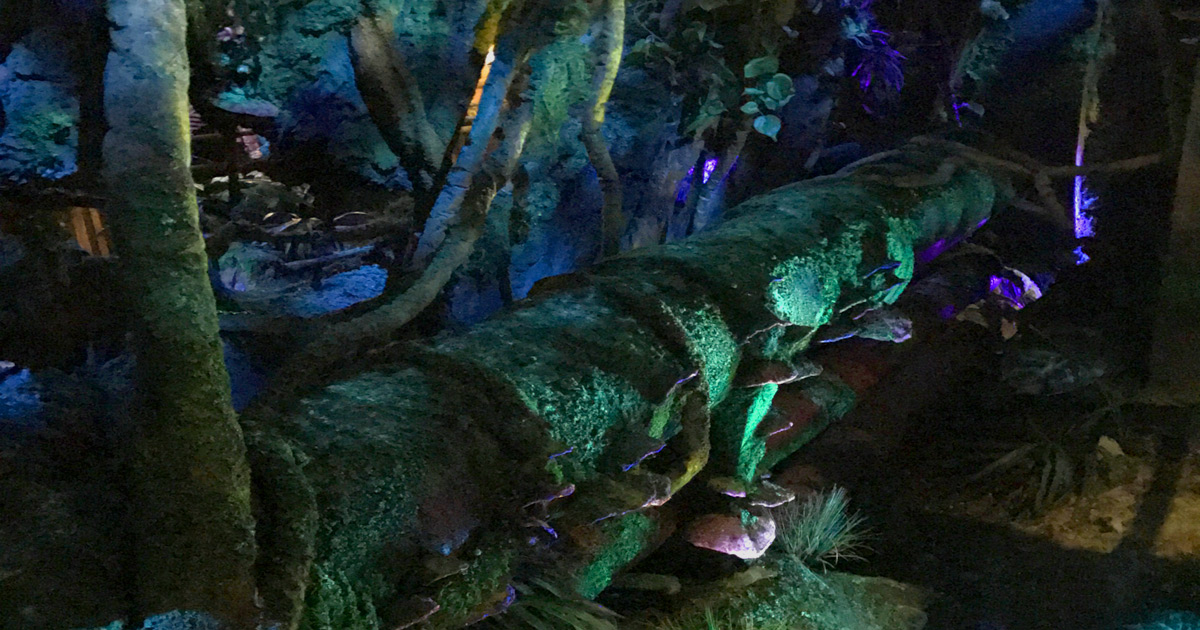 The Avatar Flight of Passage queue may be the longest, most elaborate queue in theme park history. In an industry that includes an entire campus visit to Hogwarts, that’s saying something.

If total immersion is your high-water mark for theme park design, then the Avatar Flight of Passage queue will breach your sandbag barricade and send a tidal wave of never-ending detail coursing up Park Fan Avenue and flooding out all the shops on Disney Geek Boulevard.

From the seventeen million photo tours of opening weekend, everyone is familiar with the obvious stuff. But in the Avatar Flight of Passage queue, even the details have details.

And some of this stuff is borderline crazy.

Waterfalls in the Valley of Mo’ara

This is the postcard shot from the outdoor portion of the Avatar Flight of Passage queue. Literally everyone will take this exact same picture.

This is Theme Park Design 101. You’ve got forced perspective, which makes the arches and mountains seem taller than they actually are (see: Disneyland’s Main Street, 1955).

Then there’s the lighter paint job on the back of the set, a visual trick to simulate atmospheric distortion. Refer to Cars Land at Disney California Adventure.

See all those cascading waterfalls? At least 2 of them are fake.

Since the height of distant falls is theoretically equivalent to those close by, the water should appear to fall at a slower rate. But how do you do that with real waterfalls on a fake theme park mountain range?

Our best guess is that they are some kind of blown cloth, or maybe a belt rotating at a constant speed.

They look totally believable even in person. The only giveaway is that they are slightly more frothy than the real waterfalls.

Handprints in the Cave

From the Valley of Mo’ara, you enter a cave network covered in ancient cave paintings. It’s clear that this was once a shelter to the Na’vi, the 9-foot-tall humanoid natives of Pandora.

In addition to primitive drawings of banshees, tree sprites, and other Pandora wildlife, several Na’vi handprints can be seen on the walls. But oddly, there are handprints from another species as well:

The presence of human hands is not explained. Perhaps the Na’vi allowed humans to imprint their hands on the sacred cave walls as a form of bonding.

But the mystery of the handprints doesn’t end there.

Notice anything different about this Na’vi handprint?

This is the only one we could find that has four fingers instead of three. Just like in your office, even Imagineering has screw-ups.

As it turns out, there’s a perfectly plausible explanation. According to the wiki for the movie Avatar, the real Na’vi have 3 fingers and 1 thumb. But the scientifically-created avatars are made in part from human DNA, and so they have 4 fingers and 1 thumb.

After the cave comes one of the RDA bunkers, part of the corporate/military installation left behind by the humans. The detail here is fantastic, with rusted utility boxes and black mold overtaking the airlock doors and cold concrete walls.

As you might expect in a general-purpose quasi-government building, the overhead lighting is a boring array of fluorescent tube lighting.

Because of the brightness, I could not capture a good photo. But if you stare at them with the naked eye, the fluorescent tubes actually appear to be strands of white LED lights behind glass. Perhaps Disney felt that the color temperature of LEDs was a better lighting device than fluorescent, which typically have more of a green tint.

In order to sell the idea of fluorescent tubes, one of these LED bars actually gives off a telltale flicker pattern — instantly recognizable to anyone who has ever suffered under the working conditions of these types of lights.

I suppose the flicker could be a legitimate wiring issue, but it is so eerily perfect that I have to believe it’s intentional.

The Creature in the Pipe

Outside the bunker, we find ourselves in a bioluminescent Pandora nighttime. It is apparently a dumping ground for toxic waste left behind by the RDA, but the jungle has reclaimed most of the human structures, like a rusty pipe running the length of one of the switchbacks.

The pipe is just another bit of atmosphere, similar to the collapsed catwalk above you, the rusted out ventilations slats, the crushed oil barrels, and the expired safety checks.

Every so often, in one corner of the pipe, hidden speakers allow us to hear one of Pandora’s native residents scurrying through the hollow tube.

The audio effect is sporadic. Unless you happen to pause right at this bend in the path, you probably won’t even notice it. But it does prove that even Pandora has sewer rats. Probably glowing ones.

The Pit to Nowhere

At the end of the bioluminescent jungle, the Avatar Flight of Passage queue makes another turn, traveling into the laboratory. Since the lab is well-lit, it attracts the eye.

Which is why most people never even notice the strange black pit just beyond the final bend of the queue.

It’s pitch black, like a borehole straight to the center of the planet. The absence of illumination makes it even less noticeable. It’s tucked away in the corner, almost behind the direction anyone would naturally face while in line.

The picture above is with the flash on, revealing that it’s not actually a pit to nowhere. But it does look ominous in real life — once you’re aware it exists.

You don’t actually see hoops or a three-point line, but after you pass through the lab, there’s a symbol tucked away above one of the doorways. Apparently that Emergency Exit really leads to the Pandora version of Madison Square Garden.

Okay, maybe this in itself isn’t all that crazy of a detail. But it’s a direct nod to the movie, when Jake Sully’s first experience in his avatar has him crashing through a pick-up game en route to his sprint through a bean field.

Jackie Ogden, Head of the Program

The two video pre-shows to at the end of the Avatar Flight of Passage queue contain some of the most awkward acting in Disney pre-show history. We’re not sure how much is intentional, but the scientist giving you the safety briefing appears to be reading from cue cards at several points. It feels like maybe they only had enough tape for one take.

The script is fine, but count how many times he mentions Dr. Jackie Ogden and how she is the head of the program. It’s a minimum of three times that this information is repeated, and to what end? It has literally no bearing on the story. But for some reason, this preshow really wants us to know that Jackie Ogden runs the program.

Could it be because there is a real Jackie Ogden, a retired VP of Animal Kingdom’s Animal Programs?

An Alternate Version of the Preshow

Pre-recorded pre-shows are nothing new. Everyone has their favorites. Dr. Seeker and Dr. Marsh. Flight Attendant Patrick. Chairman Clench.

The Avatar Flight of Passage queue has a preshow that a lot of people will never see. For what might be the first time ever, Disney has actually built in an alternate clip that occurs in the event of a slowdown or breakdown in the ride.

It occurs in the first holding room, where Dr. Stevens creepily scans your bodies to find you a perfect Avatar match. But if there’s a holdup in the other room, he’ll cut in with some nonsense about a link error and rush out of the room. He’ll stay gone until the hold-up is resolved. Then the preshow will resume.

And this isn’t the only insane pre-show detail. It can get downright invisible when it comes to some of these variations.

Janitors in the Avatar Flight of Passage Queue

Anyone who has ever had to clean up a military installation in the middle of a jungle on a hostile alien planet knows what I’m talking about.

Concrete bunkers half buried in a rain forest just naturally seem to accumulate grime and dirt. As the silt behind the walls works its way inside, all the janitorial staff can do is sweep it into corners.

This is especially evident in the Avatar Flight of Passage queue FastPass line, which is more or less part of the modern installation. Yet fake piles of dirt are still everywhere. It really drives home the idea of this remote complex. We’re glad some crazy genius at Imagineering thought up this finishing touch.

Eywa is the deity in the Na’vi culture — a spirit life force that connects all living things. But actually, Pandora’s creators tend to be a little more white and nerdy.

In the bowels of the Avatar Flight of Passage queue exit, you may come across three handprints on one of the concrete walls, along with the initials JC, JL, and JR.

Not every theater will take you past this strange detail, so you have to get lucky.

But it should give you a sense of comfort to know that James Cameron, Jon Landau, and Joe Rohde are looking down on you from on high.