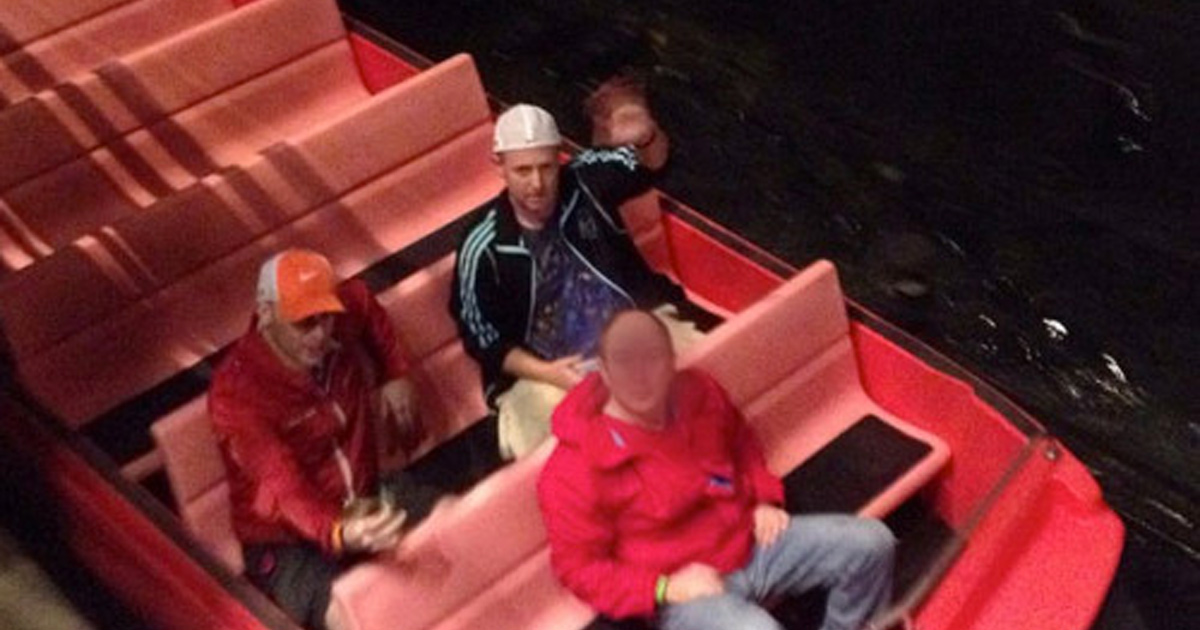 Disney prides itself on making everyone feel comfortable. Nobody wants a socially awkward situation.

But if you’re not careful, it can happen. Here are five of the most socially awkward ways in which to ride rides at Walt Disney World.

I have done all of these.

The Longest Ride Ever

But in 1990, during my first visit to the Disney MGM Studios, I had the most painfully awkward Great Movie Ride experience of my life—even worse than that time a couple years ago when I’m pretty sure my “Gangster” thought she was auditioning for the Juliette Lewis part in The Other Sister.

The park was brand new, and as you might recall, there were not a ton of rides—unlike today where guests can choose from an expansive smorgasbord of over four rides! The Great Movie Ride was the premier attraction, much like it is today for people who have not seen a Great Movie since 1982.

Being the dedicated theme park commandos that we were, my family stayed late. As closing time neared, some in our party wanted to shop for souvenirs on Hollywood Boulevard. And while they did that, my dad and I thought we could squeeze in one last ride.

And there was literally no one else in line.

Being by yourself on a ride is fun. I have done this many times on Haunted Mansion, Pirates, etc. But I have never forced a Cast Member to give me a personalized version of a 20-minute traveling theater show. Every canned joke. Every tired bit of movie trivia. All with impeccable delivery and expert timing.

At least she got a break halfway through when another Cast Member had to take over and pretend to be a gangster for my benefit.

By the time we reached Munchkinland, we had caught up to the first car (the “cowboy” car), which was completely empty, except for the third exhausted Cast Member driver who had to deliver his lines to a robot witch.

Three Cast Members, all of them forced to remain 20 minutes past quitting time so that I could up my ride count.

Our regular guide was gracious—and exceedingly pretty, which you would think would help the awkwardness. But it didn’t.

The gangster guy seemed annoyed beyond all belief. He did his lines, but he wasn’t about to interact with us in character.

The guy in the other car was practically asleep on his feet and was about thirty yards away. So he was my favorite.

Anyway, the rest of our family was annoyed with us when the ride ended because this was before cell phones and we had disappeared for twenty minutes in an empty park.

This is the first case of Cast Member cruelty on this list. They take sadistic pleasure in creating socially awkward situations. Cast Members, you know you do. You are denying it while giggling through your teeth. It’s not funny to the rest of us.

Anyway, let’s state something that is patently obvious to anyone with one working eye and a rudimentary understanding of the concept of volume:

Barnstormer is a kiddie ride.

We know this not because it is 30-seconds long and stars a silly cartoon dog, but because the seats in the dog’s airplane are approximately the width of a flatbread pizza and roughly the same height.

As I have experienced many times while riding with my son, my knees must turn sideways in order to allow them to get low enough to fit under the lap bar. My son is five years old and the car is barely big enough to hold us both. The lap bar is useless, but it’s okay because my son is wedged in beside me like a tube sock in a drafty door frame.

So when the Cast Member says the official capacity on this thing is 3 adults, they are most assuredly lying.

I was with my family again and I don’t remember which combination of three of us got assigned to the same row. But I do know we are all adults and none of us are Keira Knightley.

60 painful seconds later, they needed the Jaws of Life to extricate us from the vehicle.

Now you may think that this is my fault and not the Cast Member’s, because what were three adults doing in line for Barnstormer anyway?

But I never said we didn’t have a good reason.

If you’ve seen the WDW46 video, you know Ted and I had some fun with some of the kiddie rides. “Just two guys in their forties riding Dumbo… Nothing wrong with that.”

But WDW46 was a mission. A few socially awkward moments on the rides weren’t going to bother us. Dumbo, Carpets, Triceratops, the aforementioned Barnstormer… Strap us in, take our little plastic counting chip, and start those bad boys up.

But the best had to be It’s a Small World.

Ted and Shane in a Small World boat by themselves is fine. No big deal.

Ted and Shane in a Small World boat with a few other guests is even better.

Ted and Shane in a Small World boat with one other random dude who looks like a serial killer is socially awkward. Which of course is exactly what happened.

I suspect a little bit of Cast Member cruelty again. It’s after midnight, it’s raining, two crazy guys are minutes away from riding every ride at Disney World in a single day. Hey, let’s stick them in the boat with the lonesome stranger on the off chance that this viral video they’re shooting will help the FBI identify their bodies later!

To maximize the awkwardness of the situation, they sat Jeffrey Dahmer in row one, and Shane and Ted in row two. Because that’s what will look creepiest later when the security tapes are played back on Unsolved Mysteries. 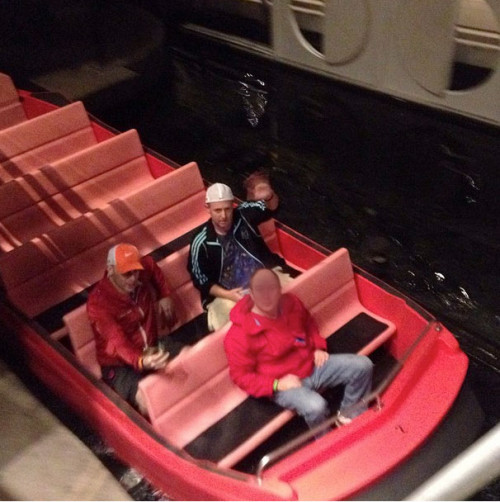 Here for the first time is photographic proof of how socially awkward WDW46 can get.

Be A Rebel. Look Stupid.

If you go to the parks a lot, you have to work at finding ways to make them new, fresh, different. A lot of times you can do this on the rides that have some “interactivity” to them.

You can try to set a speed record on the Tea Cups, or watch Captain EO without the glasses, or listen to the Mandarin version of Spaceship Earth while channeling Walter Cronkite.

But if you want to really feel conspicuous, you could try this new angle on Dumbo.

I don’t know why I decided to do this. I think that by the time I was in middle school, I had reached the stage of my Parkeology career where the normal Dumbo experience was just not cutting it. To give myself a new experience, I opted to go the whole ride without touching the lever.

Basically, that left my Dumbo skimming along through a concrete ditch for several cycles, giving me the same viewpoint as if I had simply crawled around the ride on my hands and knees.

I think I made it about halfway through the ride before succumbing to social pressures and making my Dumbo fly. It’s one thing to not touch the gun in Toy Story Mania, which can be done in relative anonymity. It’s another thing to have everyone in line wondering if A) your Dumbo is broken, or B) you are auditioning for the Juliette Lewis part in The Other Sister. 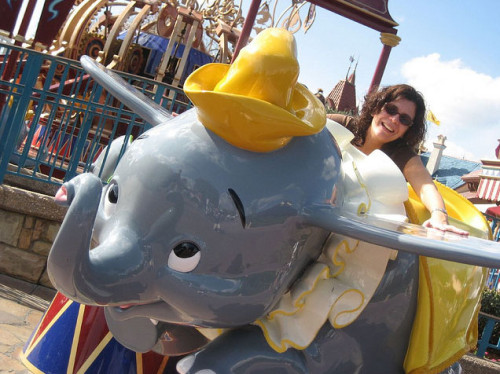 Just like this static Dumbo photo op, only in a circle!

Single Rider Line is Like Speed Dating When You Are Married

Now we come to another bit of Cast Member cruelty. Torturing single riders.

Riding solo is socially awkward enough. It’s a kind of Russian Roulette, only there are no empty chambers. You bypass long lines, but as a consequence, you are stuck next to strangers for a rather intimate journey through darkness, danger, and disco yetis. Nine times out of ten, the guy next to you on Rock ‘n Roller Coaster is either the World’s Most Talkative Disney Nerd or a grandpa who is a catapult launch away from losing his Dole Whip, along with his dentures.

There is nothing to make you feel like the world’s perviest creepazoid than when you get stuck with the odd girl out from the traveling cheer squad.

All you can do is plant yourself in the farthest corner possible and twist your head around so that you are not in any way looking at her. Keep your head that way the entire ride, no matter what it does to your neck. Then do your level best to keep your Dole Whip and your dentures from coming out.

The only exception to this rule is if she starts talking to you first. Then fake a panic attack and bolt from the ride.

And Shane would personally love it if you checked out his thrilling pirate adventure novel Johnny Shipwreck. Available on Amazon!