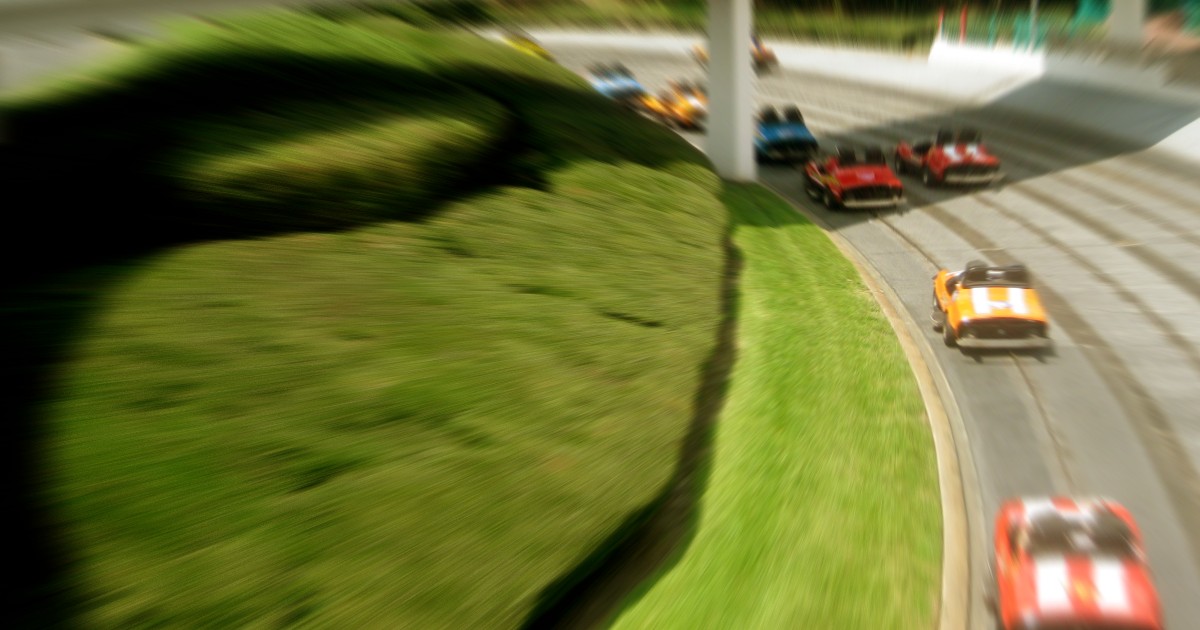 In the cutthroat world of competitive theme parking, the Parkeology Challenge is still the gold standard. But for those that crave the high-speed thrills of life in the fast lane, allow us to introduce the latest adrenaline rush: the Tomorrowland Speedway Time Trials!

What is a Time Trial?

Anyone familiar with Mario Kart and other racing video games knows the drill. You have only one objective.

Record the fastest lap around the track.

The Tomorrowland Speedway may not have much when it comes to theming. It may be lacking in thrills. It may even smell like the inside of a carburetor in the middle of June. But we can think of no finer choice for the next great theme park challenge than trying to set a speed record on a blazing hot asphalt course with a useless steering wheel and a top speed of 7 miles per hour. This old Magic Kingdom racing game agrees with us. We’re not joking when we say it is one of our all time favorite video game racers.

Admit it. You are already dreaming of glory.

The Tomorrowland Speedway is actually 4 separate tracks, with 2 parallel loading areas, of up to 11 stations each. Cars are dispatched via the highly scientific method of an hourly Cast Member holding up a finger.

The unloading situation is even more tedious. The traffic jam at the end of the ride is reminiscent of trying to leave a Disney Springs parking garage at the end of a House of Blues concert.

In real-world racing, drivers earn the Pole Position by recording the fastest lap during qualifying runs. At the Tomorrowland Speedway, the Pole Position is awarded to a random tourist who is either a small child banging into the center guardrail while mommy holds on for dear life, or just some awkward single rider who skipped leg day and now can’t depress the gas pedal.

As the self-appointed governing body in the Tomorrowland Speedway Time Trials competition, we do not wish to penalize racers who are stuck behind these amateurs. Therefore, we have established a starting point for the time trial, as well as a finish line.

At the start of the course, you will notice a pedestrian bridge, which also leads to the very exciting Tomorrowland Speedway Grandstand, one of the few places in Magic Kingdom that we bet you haven’t been to yet. We consider this bridge the true starting line. All tracks will pass underneath it, except for Track A (the far left track), which goes to the side.

Once you are under the bridge, the clock is ticking! Press that pedal to the metal and push through those unholy leg cramps. Do not let up until you reach the overhead yellow sign with the flashing yellow light at the end of the ride. You’ll know it, because a loudspeaker will be scolding you:

“Caution! You are approaching the unloading area. Please do not strike the car ahead of you.”

This is the finish line of the time trial. Check your stopwatch, smile in satisfaction, and enjoy a jug of milk in the Winner’s Circle.

What is the Current Tomorrowland Speedway Time Trials Record?

It is important to understand what time you need to beat. To that end, Parkeology has made an exhaustive attempt to track this important record.

Which is to say that we went to YouTube and literally watched every single Tomorrowland Speedway POV video that we could find, taking note of the time it takes for someone to get from the starting point (the bridge) to the finish line (the blinking yellow sign).

We stopped after 25 views, because no joke, we actually watched these videos. Soon we were weeping openly when we realized what we were doing with our lives.

We have learned that the fastest time ever recorded (in a sampling of 25 YouTube videos) is 2:40.

That is your time to beat.

How Can I Improve My Tomorrowland Speedway Time?

We are glad you asked! Just as we gave you amazing tips for cutting down your Speedway wait time, Parkeology is once again here to help. Our insightful analysis has yielded several key findings.

Here is our scientific breakdown of each YouTube video, showing time trials by track, with their average times at the bottom.

Track A is the fastest. Track D is by far the slowest. There’s a perfectly logical explanation for this: Math.

See that big left hand turn to start the race? That’s the critical one. And there are 3 other smaller left turns throughout the race for a total of 4. By contrast, there are only 3 right hand turns, none of which are the size of that first curve.

This means that the inside track has a shorter distance to travel relative to the outside track. Track A is the most inside lane, therefore it’s the shortest track. Track D is on the outside, making it the longest.

As we said, the vast majority of YouTube videos are of Track D. We only found 1 video of Track A.

Could this mean that people playing with their phones are slower and more dangerous behind the wheel? All signs point to YES.

Or it could also mean that when the Speedway reduces its capacity early or late in the day, they tend to shut down Tracks A and B, leaving fewer opportunities to drive those tracks.

Those outliers listed in the table above are from videos of people driving through the Christmas lights that were installed as part of Mickey’s Very Merry Christmas Party in 2019. If you are serious about setting the record, we do not recommend doing it when there’s a bunch of looky-loos on the highway.

Although if you can catch a glimpse of the old Skyway grassy knoll, that might be worth it.

Tip #4 – The Heavier the Better

It may just be due to the small sample size, but we often noticed that having two passengers in the car made things go faster. In fact, a heavyset guy and his girlfriend recorded the fastest time on Track C.

We are at a loss to explain why this would make a difference. Maybe the extra weight is enough to add stability to the car, keeping it from pinioning off the center guide rail as much (every time you strike the guard rail, it’s like hitting a brake). There’s also a section of the track that goes downhill, and maybe the extra weight is speeding up that section (but then what about when you go uphill?)

Or it could just be related to Tip #2. Two people in the car means that the driver is not having to do the filming.

For some reason, the cars on tracks A and C use the steering wheel placement commonly found in the United States, with the wheel on the left.

Tracks B and D use the European style, with the steering wheel on the right.

Our working theory is that most riders are Americans, so they are more comfortable on Track A and C. This causes them to navigate the guardrail more efficiently.

We have no explanation for why the U.S.-style cars drive on the left side of the road, while the European style drives on the right. But hey, if it’s good enough for parking lot trams…

When I Set the Tomorrowland Speedway Time Trials Record, How Do I Let the World Know?

Just post in the comments below! But you will need to have proof in the form of an impeccable YouTube video, which will then be reviewed by a panel of 10 dispassionate judges.

We will then approve your comment and it will appear on this page for the whole world to see.

We will then invite you to a trophy ceremony to be held at a fancy hotel, after which you will attend a state dinner with many celebrities and foreign dignitaries in attendance.

Okay, who are we kidding? We don’t have the budget for any of that. And you aren’t going to set the record anyway. Learn to deal with failure!