Most of us when we go to the movies are there to actually watch the movie.

I mean, I like cup holders and adolescent groping as much as the next guy. But if I’m going to spend the yearly wage of a Nike factory worker to sit in a darkened room for two hours, I want to watch Tom Cruise possibly fall to his death from a dumb plane stunt. Not the idiot in Row 5 texting his mother.

Same deal at the parks. When the lights go down and the butterfly curtain flaps away, our eyes are glued to the fantastic theme park performances on stage or screen.

Unless we’ve been there a hundred times.

We’ve written more tips than Cosmo about ways to spice up your ridemaking. But shows are trouble. Rather than an ever-changing three-dimensional vista of pillaging pirates, it’s often the same static bench in the same faux aquarium, listening to the same turtle factoids in the same phony Australian accent. 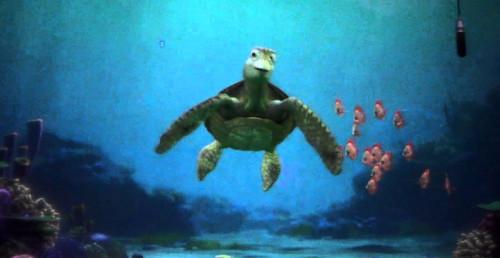 That’s why it’s often easier to ride Haunted Mansion all day long than it is to see Beauty and the Beast Live On Stage twice in the same decade.

But what if I told you crazy fans that there are secret shows hidden in plain sight?

Great theme park performances that 99% of the audience never sees?

Animatronic actors pouring their entire soul into their role for nary a scrap of recognition?

I’m not talking an occasional unnoticed sight gag. These are full-length on-stage theme park performances that run non-stop throughout the day. These guys are emoting their hearts out, with more stage-time than the stars of the show.

And you never noticed them, you godless heathen.

To find them, you have to look in a place you never would have guessed.

You have to watch the audience.

It’s a surreal situation, like reading Moby Dick from the point of view of the whale. But if you have the fortitude, you can step through the looking glass and watch other characters watch the show.

You all know Blood on the Saddle, the Bear Band Serenade and the rest of the classic show. You can sing all the carols from the Christmas version and may even quote the skunk’s lines from Vacation Hoedown.

But do you know who gets the first lines and the last lines in the show? 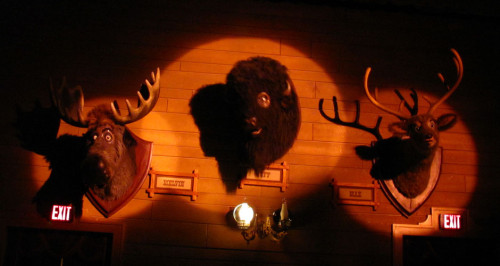 Which means while Henry is off adolescently groping Teddi Berra in the attic, Melvin, Max, and Buff are listening to the same corny numbers they’ve been hearing since 1971.

Try it next time. Try watching the entire Country Bears show while staring at the right wall.

Not only will you creep out everyone around you, but you’ll also see an entirely new Magic Kingdom show that you never knew existed.

MuppetVision 3-D is that rare exception to the rule, where the jokes come fast and furious and the sight gags are rewarding even on the tenth viewing.

But if you are one of those people whose gaze habitually gravitates to the fluffy chickens roaming through the Muppet Labs foyer at the beginning of the film, you’ve probably seen the movie enough times to try this.

And you don’t even need 3-D glasses. 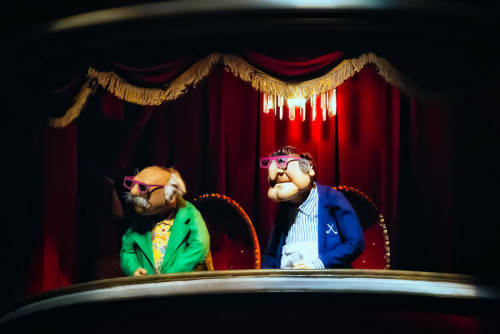 Just like Melvin, Max, and Buff, Waldorf and Statler have minor roles in the main show. And just like in Country Bears, they get the opening and closing lines.

But for the most part, they are there to watch.

If anything, their theme park performance is even more fascinating than Melvin, Max, and Buff. Statler’s mouth is forever falling open in abject shock at the hijinks on display. Both of them spend so much time ducking and rattling from all the shenanigans, you’d think stuff really was flying off the screen.

In a brilliant instance of animated puppetry, Waldorf and Statler will actually turn to face the theater when Waldo, the Spirit of 3-D, flies in close – as if that zany creature was actually hovering over people’s heads.

Speaking of which, watch them bob their head with every bounce as Waldo plays pogo on top of the audience. Or wince in time with Beaker whenever the MuppetVision paddlewheel cracks him in the skull.

And sometimes they simply can’t help looking at each other in horror at what they are being subjected to.

It’s an entire show unto itself.

I was surprised at how engaging this is for a long-timer. It takes some discipline to remain focused on these peripheral theme park performances, when everything from the music stings to the lighting cues is geared to focus your attention on the stage.

It would be great if someone skilled at low-light videography would just set up a tripod and put the entire performance of Melvin, Max, Buff, Waldorf, and Statler up on youtube.

But until that happens, you’ll just have to go to the parks and try it yourself.

It really is like discovering a completely new show.