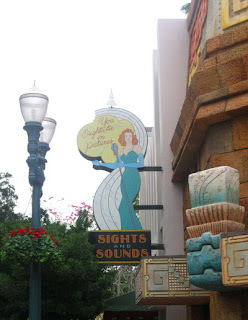 The original Disney MGM Studios had a location to showcase guests’ musical performance skills long before Ryan Seacrest showed up, and I’m not talking about SuperStar Television.  It was a shop of sorts, very similar to those photo booths where they will green screen your head onto a movie poster.  Only in this case, you got to star in your own music video.

It was called Sights and Sounds, and it was located very near the Chinese Theater in the building that currently houses the Keystone Clothiers store.  For a premium price, you and your friends could choose from a predetermined list of songs, step in front of a green screen, and be grafted into one of those cheesy backgrounds from an 80s music video.  For your efforts, you would receive a video cassette of your performance.  A similar booth existed on Pleasure Island (perhaps a topic for another Parkeology post). 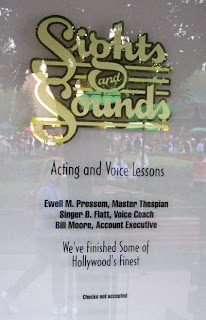 Alas, at some point in the 90s, Sights and Sounds went blind and deaf.  The retail space was absorbed by Keystone Clothiers (because frankly more visitors would rather own a Mickey Mouse tie than a video of themselves rocking out to Prince).  However, there are still some remnants of the old shop left behind, including the signage, and a door that leads nowhere (but which contains those treasured Disney name puns).

The ruins can be found on the back side of Keystone Clothiers, ironically within direct line of sight of the American Idol Experience.