The Disney company is always willing to exploit old characters in new mediums, so it’s a surprise to learn that of all the characters and personalities on property, only four are actually duplicated as Animatronic figures in different attractions.

I’m talking strictly animatronics here.  For instance, Nemo appears in several attractions, but only as a puppet or a movie, so he doesn’t count.  And while Donald Duck has an animatronic in Mickey’s Philharmagic, there is no animatronic Donald in the Gran Fiesta Tour (just videos and one silly pinata).
Sure, we could talk old attractions like the Mickey Mouse Revue, which had its own Donald figure.  And some say that the Carousel of Progress family is meant to be the same family that appeared in Horizons.  But these attractions have been gone for years.
So who are we left with?  I’m talking Disney World only here.  No fair counting Peter Pan in Florida and in California.  And neither can you count AA figures within the same attraction, such as Brer Fox, who appears over and over again in Splash Mountain.  I’m talking separate attractions, and the characters must be the same, not simply a re-use of the same sculpt (such as the mold for Carousel of Progress’s Grandpa, which does double duty as a scientist in Spaceship Earth).

I can think of only four.  Amazingly enough, none of them are Disney characters, and even more amazingly, it really does line up with Mount Rushmore.  Except for Lincoln, who gets bumped for FDR. 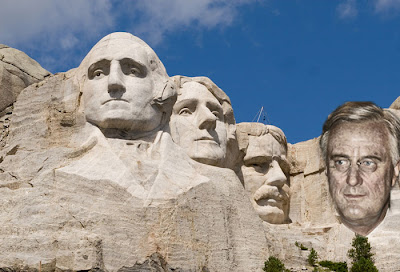 I guess it makes sense that the Presidents would be in two parks at once.  They use body doubles all the time, don’t they?