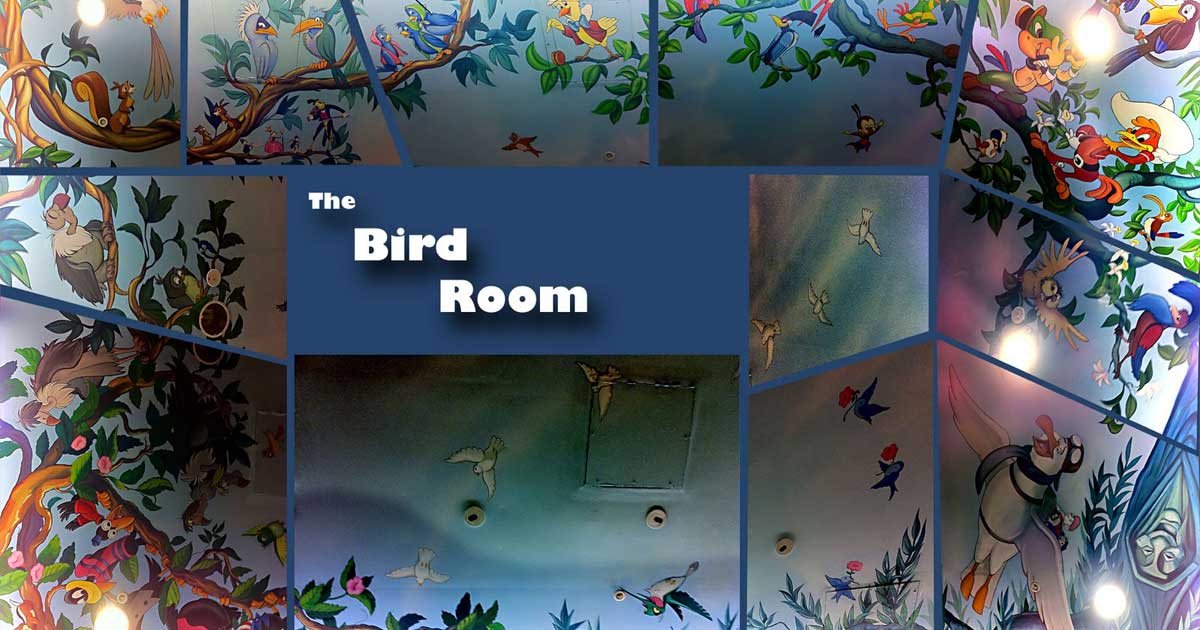 The World of Disney Store is a weird confluence of Disney imagery. Fairy Godmothers paint your daughter up like Miley Cyrus. A giant blue alien spits at you. Animatronic pirates rattle their cages while giant faux chrome characters loom overhead like nightmarish Macy’s Day Parade balloons.

For creepy sculptures, none beats the soul-less form of John Smith, resting comfortably in a rocking chair, clutching what is either a paintbrush or a torch for burning witches, with a teacup floating magically at hand. Kids, if John Smith ever turns his icy stare on you when he’s in a painting mood, you best say a short prayer. And then you better run.

Yet World of Disney is not without its less frightening details. My particular favorite is what I call the Bird Room. Maybe it has an official Disney name (The Celebratory Magical Memories of Wishful Dreams and You Room). It consists mainly of polo shirts. And also a ceiling mural, which I can stare at for hours. Okay, maybe not hours. That would be weird. And give me a heckuva neck ache.

I guess the reason I like it so much is that it is one of those rare nods to the whole pantheon of Disney characters — not just the latest Princess or wise-cracking sidekick voiced by the comedian flavor of the month. They’re not all birds. There’s some squirrels scattered about in the mural, a few dancing bugs, at least one talking tree. They do have some of the more familiar birds. Iago and Zazu both put in an appearance. With the closure of Under New Management, this is now the only spot you can still see them together. And it’s even better than the attraction since neither one of them speaks.

I love the obscure references to some of the old short films. We have characters from Who Killed Cock Robin? and The Grasshopper and Ants. There’s even a gag ripped straight from The Three Caballeros, where a bird with a scissortail frozen in mid-snip, having just given an unexpected trim to a rather vain blue specimen. You can also spot the Aracuan Bird from the same movie. He likes to pop up in unexpected places.

Here is a comprehensive look at the whole World of Disney mural, made possible through some lazy Photoshopping. Clicking it should embiggen the image. How many characters can you name?