If you believe in conspiracy theories, then you can twist anything to fit your theory. Not only can you twist it, you must twist it. Cubans assassinated JFK. The Moon Shot was faked. NBA games are rigged. And global warming is to blame for all of them.

Here at the Parkeology offices, we have a theory that Famed Naturalist John Muir is the most important person in the Disney universe. Think about it. He’s the most famed naturalist that ever lived. And Avatar has a strong nature message. Coincidence? I think not.

If John Muir has a lieutenant, then it must be the Funmeister. We are obsessed with the Funmeister. The man is literally responsible for all the fun ever had by anyone in the history of fun.

He’s our Elvis, the guy who pops up everywhere. And I’m fairly sure he has been watching us from a distance like a Bette Midler song. 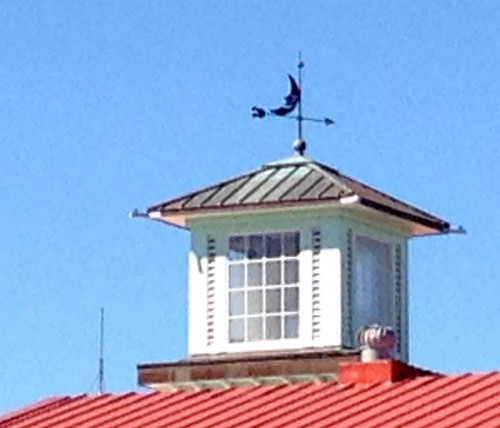 That’s a weathervane high atop the DVC welcome center over at Saratoga Springs. It’s not the greatest photo in the world, but that is clearly some sort of half-man, half-moon cackling maestro of fun. What would the Funmeister be doing over at Saratoga Springs? How does a laughing moon fit into the theme of Saratoga horse racing (or whatever the theme is at the resort)? Simply put, it doesn’t. A laughing moon face can only mean Funmeister, and he is your new Big Brother, your eye in the sky.

If you know your geography, you know this weathervane probably has a direct line of sight to what used to be Pleasure Island — the undisputed Fortress of Solitude for the Funmeister. My theory is that this weathervane never points anywhere except directly at Pleasure Island. I even tested this theory on a non-windy, sunny day, and lo and behold, the weathervane never moved. The Funmeister has been watching this whole time, waiting for his chance to reclaim the throne as the funnest guy in Disney World.

I put the odds of this being a coincidence at 1 in 84 million. Now who wants to throw a New Year’s Eve party tonight?