The eighties rocked.  Although I was already an adolescent by the time the decade dawned I most certainly consider myself a child of the eighties. EPCOT Center’s opening in 1982 was a BIG deal for me. 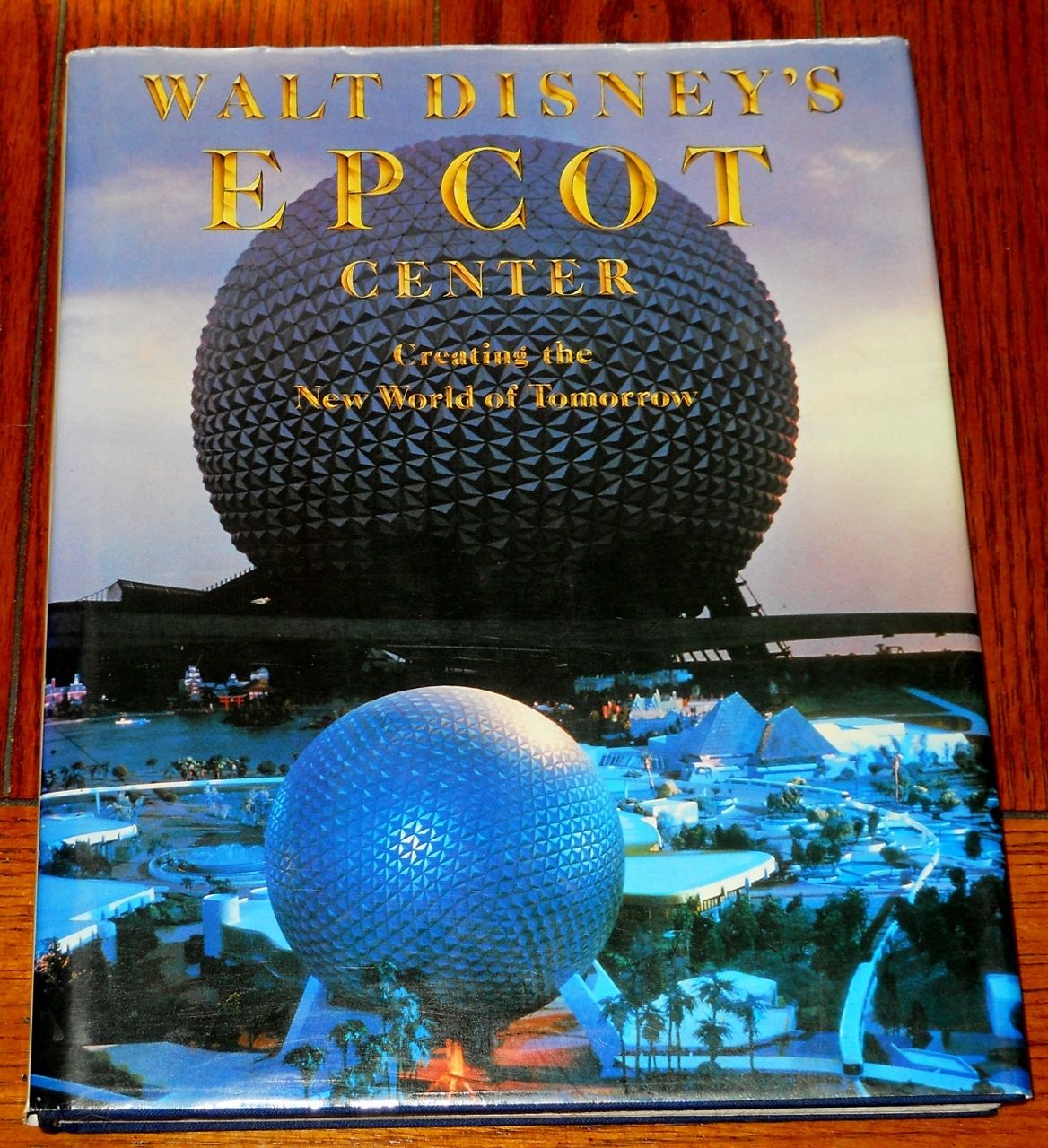 Still the BEST book ever.

Having already been to Walt Disney World numerous times I was enthralled with the idea of a new Disney park opening… and not just any park this was the park of the future here today.  I poured over the Abrams EPCOT book… the real one, the cool one, the one that was released before the park opened and was chock-full of concept art.  I memorized every brush stroke of every incredible piece of concept art and renderings it contained.  I loved the international mix of visitors portrayed by Herb Ryman and the other illustrators (look, that dude has a turban on!). 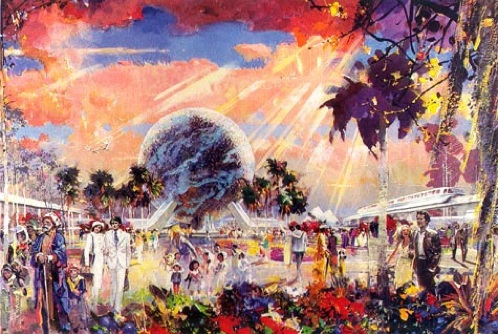 Around this same time in my life movies were kicking into high gear.  We had an unprecedented string of blockbusters from the late seventies through the mid eighties.  It seems like every year a new and bigger and more exciting theatrical adventure would be released on us.  These were real events, not the prefabricated “event” movies of today.  These were worth lining up for and I did just that, often waiting several hours to get my chance to see Temple of Doom, E.T. or Return of the Jedi… it was an incredible time.

Back to the Future came out on the tail end of this in 1985. I was a teenager by then and some of the magic was slipping away but it was still totally awesome. Meanwhile EPCOT was really hitting its stride; Imagination and Horizons were both fully operational (after several delays) and The Living Seas was on the cusp of opening.  Like the movies of the day EPCOT kept topping itself with one mega attraction after the next (my how times have changed). The original Universe of Energy was not the slow, boring and dated oddity it is today… well it was actually but it was not perceived that way. It was an incredible adventure through time. 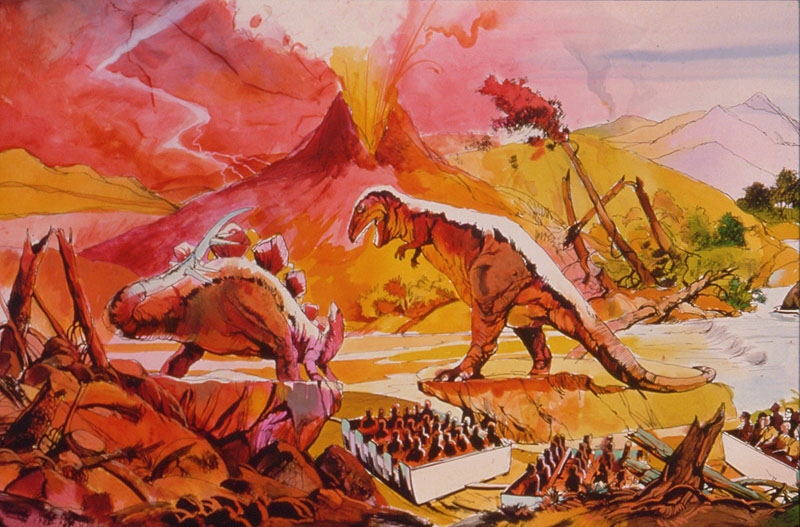 In fact it predated Back to the Future by several years and also predated the idea of traveling back in time to correct past wrongs.  What am I talking about exactly? Well it is obvious that the Marty McFly character played by Michael J Fox is a clear and direct rip off of one of the main characters seen in The Universe of Energy. 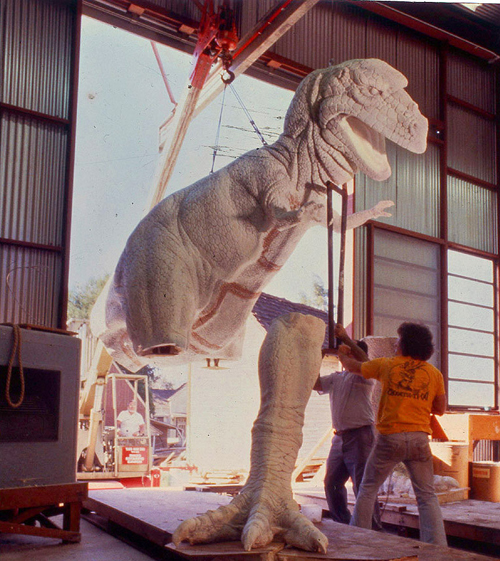 Steven Spielberg was the executive producer of Back to the Future and we have already proven that he is a blatant plagiarist of Disney properties and here he goes again raiding EPCOT for his personal gain.

Before we get to that a little history:

The Walt Disney Company was still in a bit of a state of disrepair at EPCOT’s opening.  This was post Walt and pre Eisner and though none of it was evident to the 14 year old me Disney was reeling from indecision and poor financial investments.  Dropping a billion or so dollars to build a large-scale permanent world’s fair with no Disney characters and an educational bent was not helping the situation either; Disney was on fragile ground. 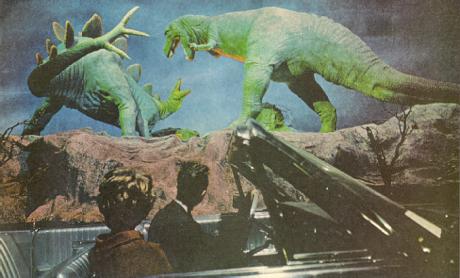 Regardless they soldiered on and went at EPCOT with full force, but that did not mean they were above saving some cash here and there.  The Universe of Energy called for life sized audio-animatronic dinosaurs and it just so happens that Disney had created these creatures nearly 20 years earlier for the Ford pavilion during the 1964 World’s Fair.  They had the sculpts and they knew how to make them… and so EPCOT’s lizard kings were set to be virtual clones of those seen on the Magic Skyway of Ford’s dazzling mid-century show.  In fact those very same original dinos can still be seen today from Disneyland’s railroad and duplicates of EPCOT’s (and lesser known) can be viewed from the Tokyo Disneyland railway as well. 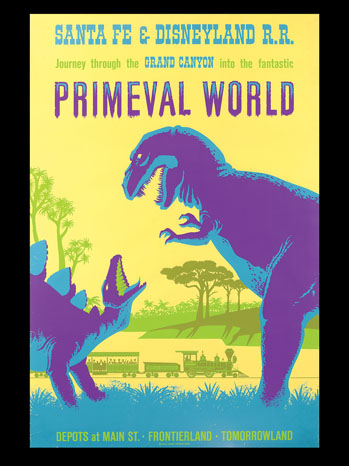 At Disnelyand they are purple and ultra cool.

The Imagineers replicated much of the 1964 show within the massive EPCOT Energy pavilion; the Brontosaurus (which we now know as Apatosaurus), the Pteranodon and most famously the dueling Stegosaurus and Tyrannosaurs Rex. 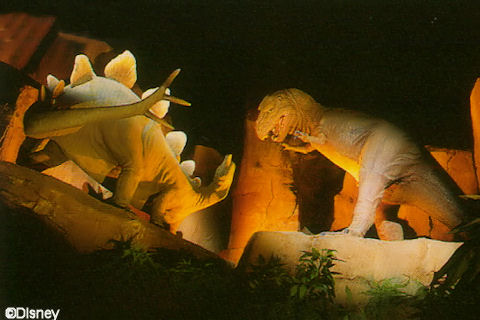 They went beige at EPCOT but still were cool.

The later two have been battling for decades atop a rocky cliff… first for the World’s Fair goers, then the train passengers in Anaheim and Tokyo and most recently for the visitors of EPCOT… and yet something is off here. 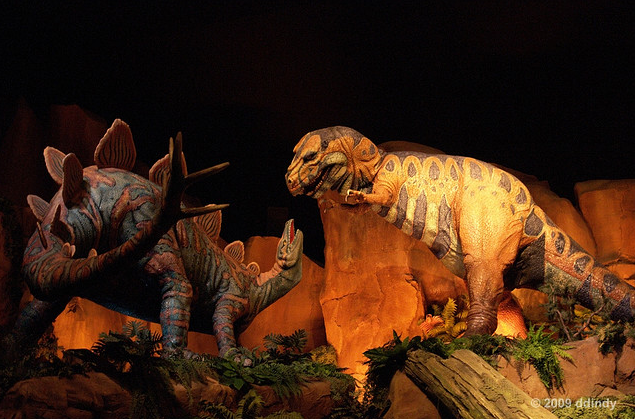 Today they look like garish street walkers… maybe not quite as cool.

The Stegosaurus lived in the late Jurassic period about 150 million years ago. The T-Rex lived in the cretaceous period 66 million or so years back.  So roughly 90 million years separated these two bad boys from ever meeting face to face… Since we know that Disney never makes mistakes and is incapable of such a massive error we can draw the logical conclusion that the T-Rex is in fact a time traveler.  He has crafted some sort of primeval world DeLorean and traveled back in time to take vengeance on poor old Steggy, presumably for trying to break up the T-Rexes mom and dad or something like that.  So clearly Back to the Future is a rip off of The Universe of Energy and Spielberg has been caught red handed (again).  But the story is not quite so cut and dry.

It seems that over the years a conspiracy has been occurring.  An Oliver Stone level cover-up has been forced upon the public and we have all lapped it up like so many blind sheep being led to the cliffs edge (how many mixed metaphors can I use in one sentence?).

What the hell!?! Not exactly your grandpa’s T-Rex.

I grew up thinking a Tyrannosaurus Rex was a big, erect, lumbering creature with a lizard like tail dragging on the ground and comical little stunted arms helplessly grasping at the air. In essence I knew T-Rex to be just like the creature shown in the Universe of Energy. Then Jurassic Park came along and suddenly the T-Rex was some sort of crazy fast running nightmare with his head swinging feet from the ground, his tail cantilevered out as a counter weight and his arms located just right to grasp his dying pray.  With a blink of a CGI eye EPCOT’s dinosaurs became as extinct as the real thing.

Somewhere around here (and the time that Disney converted the wonderful original pavilion to the dated and garish one now on display) Disney started to burry any reference to a T-Rex being housed within EPCOT at all.  They just vaguely referred to prehistoric creatures and to be fair there are a total hodgepodge of brutes crammed in there for sure. Disney never claimed this to be scientifically accurate… perhaps they were trying to depict a passage of millions of years required to make fossil fuels? Perhaps they intentionally showed dinosaurs from all eras… I can buy that.  But it’s hard to imagine that showing two dinos separated by tens of millions of years side by side fighting each other was anything but a mistake.

Nonetheless Disney covered it up.  Depending on what you read they now most commonly claim the creature is an Allosaurus, a dinosaur that kind of sort of looks like the one depicted but that lived in the same time period as the Stegosaurus and thus could pass as “correct”. 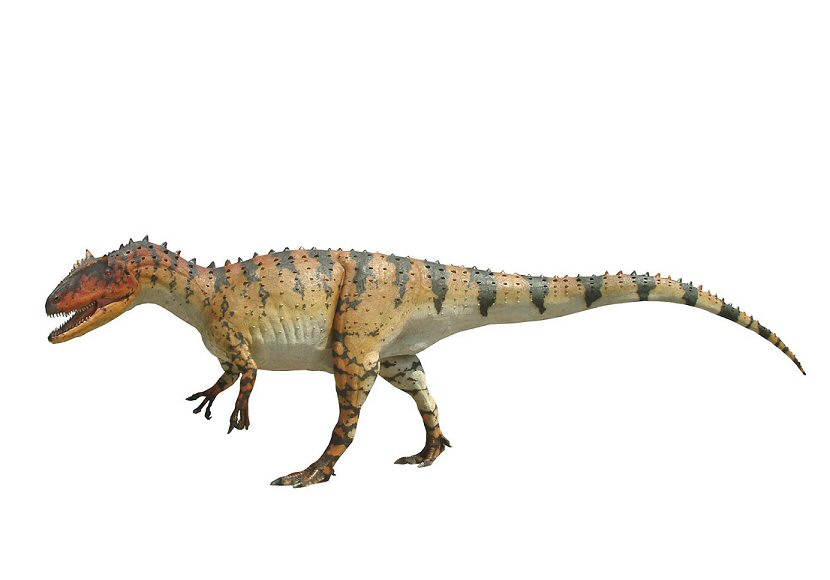 This is an Allosaurus… I’m not buying it.

In fact as time goes by I find it nearly impossible to find any Disney reference or even fan page references to a T-Rex being part of the attraction.  Could it be that maybe it really is an Allosaurus?  Could it be that the early sixties imagineers carefully researched all available paleontological data and came up with an accurate representation of a life and death battle as it appeared millions of years ago?  Is it possible that all the fan pages that list the monster as an Allosaurus are not apologizing for an obvious mistake but rather accurately portraying the fine eye for detail Disney is known for? 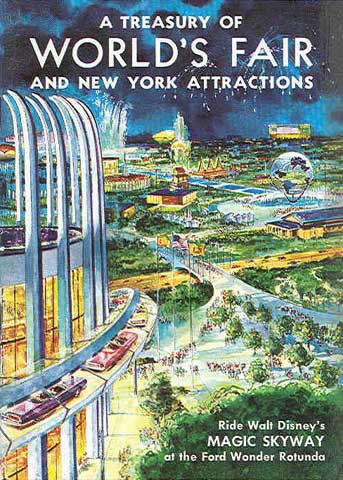 In an effort to promote the 1964 World’s Fair, the genesis of the dinosaurs that eventually made their way to EPCOT’s Universe of Energy pavilion, Walt Disney himself narrated an episode of Walt Disney’s Wonderful World of Color titled “Disneyland Goes to the World’s Fair”.  Walt happens to mention these very dinosaurs, he is quite proud of them.  Watch the video below:

If Walt says it’s a T-Rex then it’s a freaking T-Rex!

Lets cut the guys a break.  It was the early 1960’s when the scientific view of how prehistoric creatures moved and lived was quite different then it is today.  Plus these guys had like a year to design and build the whole shooting match… they had no time to research dinosaurs any more than watching the Rite of Spring segment from Fantasia.  Fantasia was released in 1940… so the truth is that in 1982 when the futuristic EPCOT opened it was packed with scientific views gleaned from a then 42 year old piece of animated entertainment. 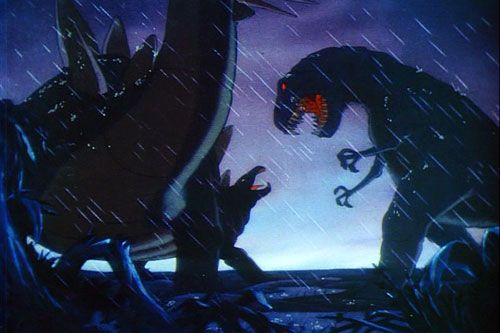 But I still think Spielberg ripped them off and I will always call the big guy “Marty”. 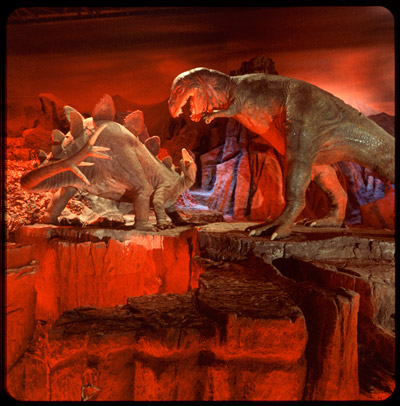 Once a T-Rex ALWAYS a T-Rex!