There are certain things I should know by now. Hollywood Studios is, what, 22 years old now? You’d think I have a good understanding of how some of these things work. But sometimes stuff slips by me. Simple stuff. Last Friday, I just noticed something for the first time, and if it weren’t for the CM overplaying her role, I would still be in the dark.

Okay, so hopefully I’m not spoiling anything for any of you when I say that midway through the Great Movie Ride, your ride vehicle gets hijacked. This can happen in either the gangster scene, the cowboy scene, or in one memorable and life-scarring scenario, the Mary Poppins scene, where a whole slew of chimney sweeps descended on my car and forced me to Step In Time.

In the gangster scene, a gangster known as Mugsy draws a gun and tells your tour guide to “get over here.” Your tour guide, being the overacting college theater major that she is, obediently puts down her microphone and hastens off to the side, where she and Mugsy exchange words. They are interrupted by a gang hit, which leaves your tour guide ducking for cover, Mugsy returning fire, and you wondering if you should leave the gun and take the cannoli.

Mugsy shoots the red light (“I hate red lights”) and drives off into the… wait a second. Did you hear what I said earlier? Your tour guide puts down her microphone and hastens off to the side.

I’m usually good about catching stuff like this, but it never occurred to me before that even without her mic, we can still her our tour guide’s exchange with Mugsy clear as day. Is she wired? Take a look at this: 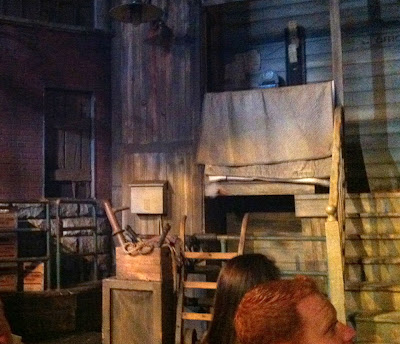 The door and staircase on the right is where Mugsy appears. He comes down those stairs (triggering a nice startled cat effect as he does so). He motions our tour guide over to the left, where she stands just to the left of that crate of junk. Behind her are Mugsy’s two henchmen (we only ever see their heads and shoulders).

See that nice round pipe jutting out of the junk crate, at approximately, oh, I don’t know, mouth level? There’s your hidden microphone.

I don’t know if it’s been there since Day One, but my wife swears it’s been like that forever. If my tour guide on Friday hadn’t been leaning forward trying to project her voice into the pipe, I still wouldn’t have caught on.

And now I’ve spoiled it for the rest of you.