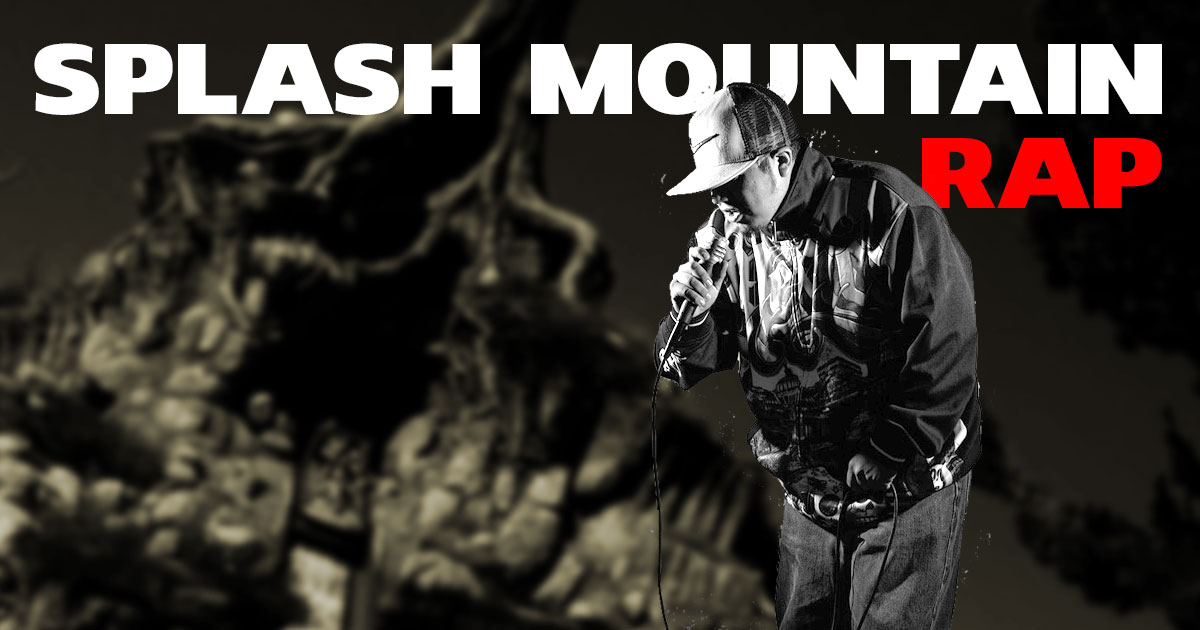 The Splash Mountain rap will be the most awkward part of your week. Your month. Possibly even your life.

But you will watch. You have no choice. When history presents you with a D-list TV star busting rhymes in front of a theme park ride featuring woodland animals, you must rise to the occasion.

Hear it. Memorize it. Perform it with your friends. The Splash Mountain rap is your next rap battle winner.

My name is Park-Dawg and I’m here to say
Never begin a rap this way.
I’m tryin’ too hard to sound cool and hip
So don’t bust my rhyme or I’ll bust your lip.

As long as I talk and don’t sing these words
I’ll be the deffest rapper you’ve ever heard.
Even if Brer Bear’s voice actor can’t hack it
I’ll bring down the house in my sweet Mickey jacket.

This is Disney, yo. We’re a major playa’.
Our promo vids have more than one laya’.
We’re gonna reconnect with all the young teens:
Moms, pops, and tots and all in betweens.

When we showcase a ride, we make it sound rad.
We use all the hip lingo. We’re like MJ. We’re bad.
Fo shizzle, yo. Hey this stuff is a habit.
Log flumes and bayous and pink bunny rabbits.

There ain’t nothing more gangsta or street or legit
than a 200 year folk tale that might get you wet.
Take a song that’s already four decades too square
Just throw in a rap. Man that’s one hipster hare!

It’s so gnarly and relevant and everyone digs it.
Nothing sounds edgier than a rap so profligate
that you can’t help but watch and want to go visit.
Cool kids ride this ride. You’re one. It’s implicit.

Think we made a mistake with those neon hard hats?
Think again bro! Village People cast-offs are phat!
And those fly chicks are dope. Those are five major hotties.
Especially when their ghosts step out of their bodies.

Don’t make any jokes about how I can’t dance.
Talk to the hand, girl. I so ROCK these pink pants!
I’ll rap battle your butt any times any places.
White boys can’t rap, WHAT? Song of the South is less racist!

Keep 2Pac. Keep Jay Z. Those cats can’t improvise.
You want a serious rapper, get Nick from Family Ties.
It takes someone creative to rhyme the word zip.
Let me think for a second. I’ve got it! Zip zip!

We know a good thing when we see it, y’all.
You’ll wanna lay down these tracks with your friends at the mall.
Yo this song is da bomb. Guaranteed to entice.
It’s a rap so nice we recorded it twice.

Check it out yo! Timestamp Three-oh-one represent!
It’s a whole ‘nuther version and just as intense.
You can feel yourself getting cooler with each viewing
You’ll be tight like Jane Fonda, blocking shots like Pat Ewing.

Don’t get the reference? Too bad. They were big in the Eighties.
See ya, loser. I’m gonna go ride Splash with five ladies.