Rabbits may be clever about a great many things, but the idea of open-flame cooking in a giant patch of brittle thorn brambles is probably not up there among the brightest ideas in the universe.  Witness Brer Rabbit’s house, the Briar Patch, where a giant fireplace makes a nice centerpiece to their little collection of kindle.  Good thing this isn’t Epcot.  All it takes is a Sherman Brothers theme song, and this place is going up like the Illuminations Inferno Barge. 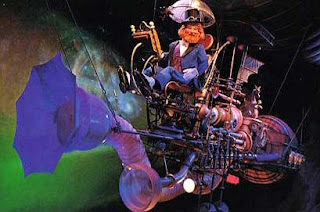 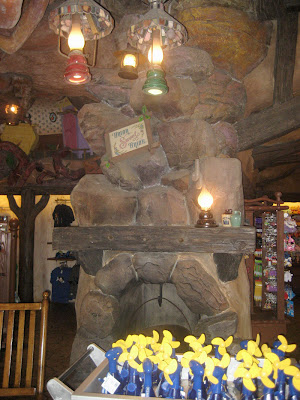 The Briar Patch sits out in front of Splash Mountain, appropriately enough.  As Frontierland merchandise locations go, it’s one of the better ones.  Not because of the merchandise itself (nothing special about spray bottle fans and pin lanyards) — but there are some great details above the wares.  Particularly the upper level of rabbit furniture and bedrooms.  The place looks downright cozy.

Fire hazard aside, the hearth is a nice detail.  Like everything else in Splash Mountain, it’s sculpted out of “mud” — a clay-like material that goes over a wire frame, where it is molded into the desired shape and painted to match.  For instance the “wooden” mantle is actually made from the same material as the chimney rocks.  In fact, the whole thing is one giant sculpture, not separate pieces at all.  Only certain props like the lantern, the cooking pot, and the jug are added after the fact.

While not as important in this shop, Splash Mountain uses the technique as a practical matter.  Surfaces made out of “mud” are resistant to moisture, whereas a real wooden mantle would suffer in the ride’s humid conditions.  Presumably “mud” is also fireproof (though real briar patches are not) and we can rest easy, admiring homey touches like the crocheted “Briar Sweet Briar” placard, without concern that this place is only a hot soup splash away from turning into the boiling bunny scene from Fatal Attraction. 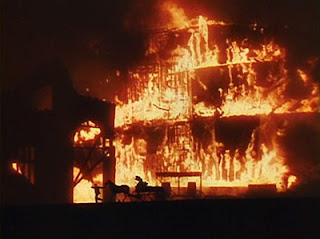 The Great Chicago Fire, Sherman’s March to the Sea, or Splash Mountain after the 10:00 p.m. performance of “Wishes”?

But what I love most about this fireplace has nothing to do with building materials or poor rabbit decision-making.  Rather, it’s a wonderful detail of the type that sets Disney apart from its competition.  Most people will never take notice of it, because frankly one does not think about such things in a theme park, especially in a low traffic merchandise location.  If you happen to set foot in the shop, you’re not going to spend much time examining the fireplace.  One look at it and you can tell it’s all for show; not a real fireplace at all.

Yet Disney storytelling is always consistent, even when that consistency is almost guaranteed to go unnoticed.  It may be a fake fireplace, but it still needs something to make its story complete… 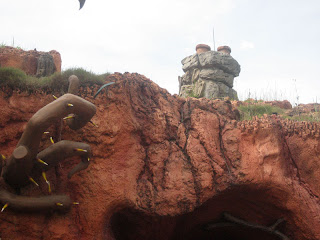 P.S.  This is now the second straight post about a chimney with a Sherman Brothers reference.  I think this is probably the first time in the history of the Internet that such a feat has been accomplished.  Also, I think it highly probable that the Briar Patch chimney has the same practical purpose as the one in Pirates of the Caribbean:  Roof support.  Just an observation.