With last Sunday’s premiere, the Disneyland 60th Anniversary TV special won the evening with a robust 1.8 Nielson rating, proving once again that nobody understands Nielson ratings.

Ted and I live-tweeted the entire 2-hour broadcast because anniversary specials are rare. Through the first half of Disneyland’s history, there were four. Through the second half (i.e. my entire adult life), there have been only two. 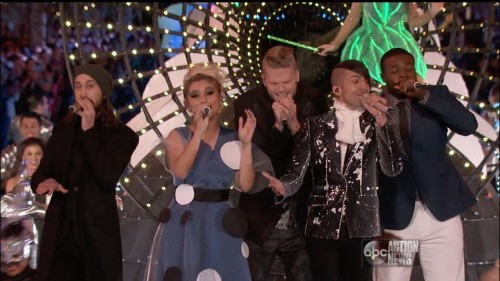 And only one featured Joy from Inside Out, a shorn Kylo Ren, and that new homeless dude from The Walking Dead singing acapella.

For those of you like me who have a fondness for the pomp and pageantry of an overwrought self-congratulatory commercial, it helps to know where last week’s special fits in the big picture of theme park anniversary shows.

If ever a category cried out to be ranked, this is it.

Last week’s show had many things in common with all of its predecessors: Celebrities, announcements, world premiere exclusive sneak peeks, and cross-platform synergy.

Only one thing was missing:

I get that you want to promote your upcoming movie slate, your cable channel tween stars, and your financially draining overseas property. But you’re celebrating the anniversary of the only park that Walt himself personally oversaw. Can’t you do more than a three minute Josh Gad Dole Whip run?

The show isn’t even hosted at Disneyland. The big names (Helen Mirren, John Stamos… you know, the giants!) are all sequestered in the Dolby Theater across town. There’s some token acknowledgement that we’re talking about Disneyland because Dame Helen is wearing mouse ears, but mostly it’s songs from the upcoming Jungle Book movie, or a reminder that hey, maybe the Muppets could still be relevant! Or a baffling parade of kid-in-loin-cloth movie trailers.

On very rare occasions, they cut away to Elton John sleepwalking in front of Sleeping Beauty Castle.

The one moment everyone is waiting for is whenHarrison Ford comes out to tell us more about Star Wars Land. There are a few brief glimpses of concept art which is either identical to what we have already seen, or slightly different but not really showing anything. It’s clear they don’t really have anything ready yet.

If I’m being honest, I’m worried they don’t understand Star Wars at all. There’s a lot of appeal in visiting the Star Wars universe, but it’s hard to imagine Universal opening a Harry Potter expansion featuring an area never seen in any of the movies or books.

Then it’s back to Idina Menzel for yet another Frozen performance, and some talk about Finding Dory, and then suddenly Shark Tank is on. Nice transition, guys.

By funny coincidence, the two most recent specials are at the bottom of this list. But make no mistake, the 35th Anniversary is much more Disneyland-focused.

It has a celebrity host, Tony Danza, at the height of the Who’s the Boss craze sweeping the nation (ask your parents, kids). It also has a cold open with the cast of Cheers. It’s worth noting that these were not Disney shows, but merely popular. These specials always relied on a corny mixture of nostalgia and pop culture relevance.

This show also features the tried-and-true gag of casting a celebrity as a Jungle Cruise skipper. Because as millions of Awards shows have taught us, celebrities are great at bad jokes.

There’s also a nice moment when Miss Piggy gets strung up like a wild west outlaw next to the Matterhorn. Though I admit that I only like this scene precisely because everyone in the background seems oblivious to the fact that someone just rocketed a pig puppet into a tree (28:55 mark below)

The highlight of the show (and really the only segment I remember from it) is an appearance by DJ Jazzy Jeff and the Fresh Prince doing a rap version of Supercalifragilisticexpialidocious.

Usually Disney raps are more awkward than taking your sister to the prom. And this one is slightly better than that.

For the big silver anniversary, Disney turned to heavy hitter Danny Kaye as the celebrity host. You may know Danny Kaye from his work as celebrity host of the Grand Opening of EPCOT Center, which is literally the only other thing I know him from.

This special featured various celebrity appearances, stitched together by Danny Kaye in “comedic” and sometimes “racist” skits around the park.

About halfway through the special, a pre-EO (heck, even pre-Thriller) Michael Jackson shows up to sing Follow the Yellow Brick Road. Looking back on this moment now, it’s completely surreal and wonderful, not least of which is because of how normal MJ looks.

And if anyone can figure out the identity of the tutu-clad girl bear who dances with Balloo, Brer Bear, and the Country Bears at the 40:20 mark, please let me know.

Those of you who are good at math may wonder why Disneyland was celebrating its 5th Anniversary on its 4th birthday. Well there’s a very good reason:

This special was a “re-dedication” of the park, thanks the expansion that brought the Submarine Voyage, the Monorail, and the Matterhorn to the park.

In terms of style, this one feels very much like the original opening day broadcast. Walt Disney and Art Linkletter are the hosts, and there are iconic moments to be found here, such as Vice President Richard Nixon trying (and failing) to cut the ribbon on the monorail.

I downgrade this show in the rankings only because it is barely alive today in a watchable format. The only surviving footage is from a kinescope (basically someone videotaping their TV screen).

Apparently someone in the Disney archives took one look at grey submarines, streamlined monorails, and Swiss mountains and decided they didn’t need to keep a copy of that kind of crap.

This show hits #2 on my list for purely personal reasons.

Growing up in the midwest, the specials were a rare treat--a chance to visit the parks from the comfort of my own living room.

My family was on the cutting edge of VCR technology, and I taped everything I could. Two shows in particular were played literally hundreds of times in my house--the Grand Opening of the Disney MGM Studios and Disneyland’s 30th Anniversary.

I have probably seen the 30th Anniversary as many times as I’ve seen Star Wars, and can recite it with the same accuracy. 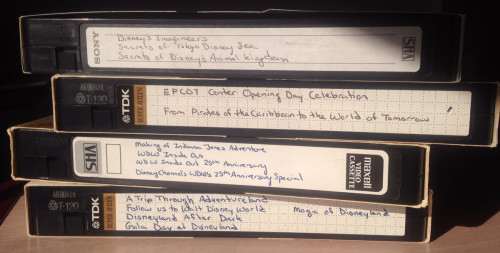 I no longer own a working VCR, but I still own these tapes.

Drew Barrymore, hot off her appearance in the Grand Opening of EPCOT Center in which she is creepily cuddled by Danny Kaye, was one of the hosts, along with John Forsythe, who is a gentleman. Much like the recent 60th Anniversary, most of the celebrity portions take place at night.

Through this special I fell in love with Debbie Allen during her Adventureland-inspired Zip-A-Dee-Doo-Dah number (apparently we here at Parkeology cannot resist women dancing around in native garb), fell in love with Marie Osmond wearing all-white on Main Street U.S.A. (hot off her performance in the Grand Opening of EPCOT Center in which she angrily sings about World Showcase), and fell in love with the music of Alabama in spite of never once listening to any other Alabama songs other than the ones performed on this show.

Driving through Vegas later in the decade, my jaw hit the floor when I saw that I was actually in the same city as one of the acts from that 30th Anniversary show. Bobby Barosini’s Orangutans were appearing nightly! (my parents heartlessly did not buy us tickets)

Also, you have not lived until you have watched David Hasselhoff singing with the Big Bad Wolf or dancing with Fantasia Hippos.

There’s a nice playlist of the entire show on youTube.

It’s not the most star studded affair, though it does feature the first Disneyland Ambassador, Julie Reihm, and some Studios suit as the host. 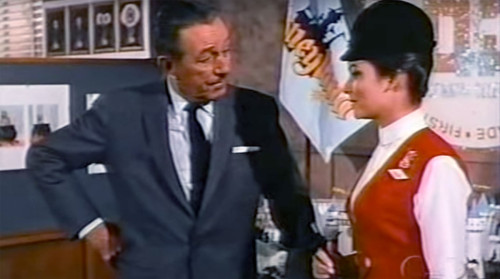 I’ll let you figure out which is which.

The musical numbers are much more muted. Some pieces of birthday cake and candles dance in front of the castle, in what might be the most bizarre character show in Disneyland history. A high school band performs down Main Street.

But the showcase of the park is second to none. Walt highlights three coming attractions: Pirates of the Caribbean, the Haunted Mansion, and It’s A Small World, which are probably still the greatest three attractions in Disneyland history.

And he pulls no punches. This is no coy, static pan over the same three pieces of concept art. This is a full on walk-through of the entire Pirates ride, followed by a long ride-through of virtually every Small World scene. In our era of spoiler-free teasing, it’s shocking how much the master himself is willing to give away.

Eat your heart out, Harrison Ford.

To top it off, there’s an elaborate segment detailing the history of Disneyland, and the whole episode is capped by a glorious sequence on the Rivers of America, which is especially poignant in light of the recent closures.

This one is required viewing for Disney fans of all ages.