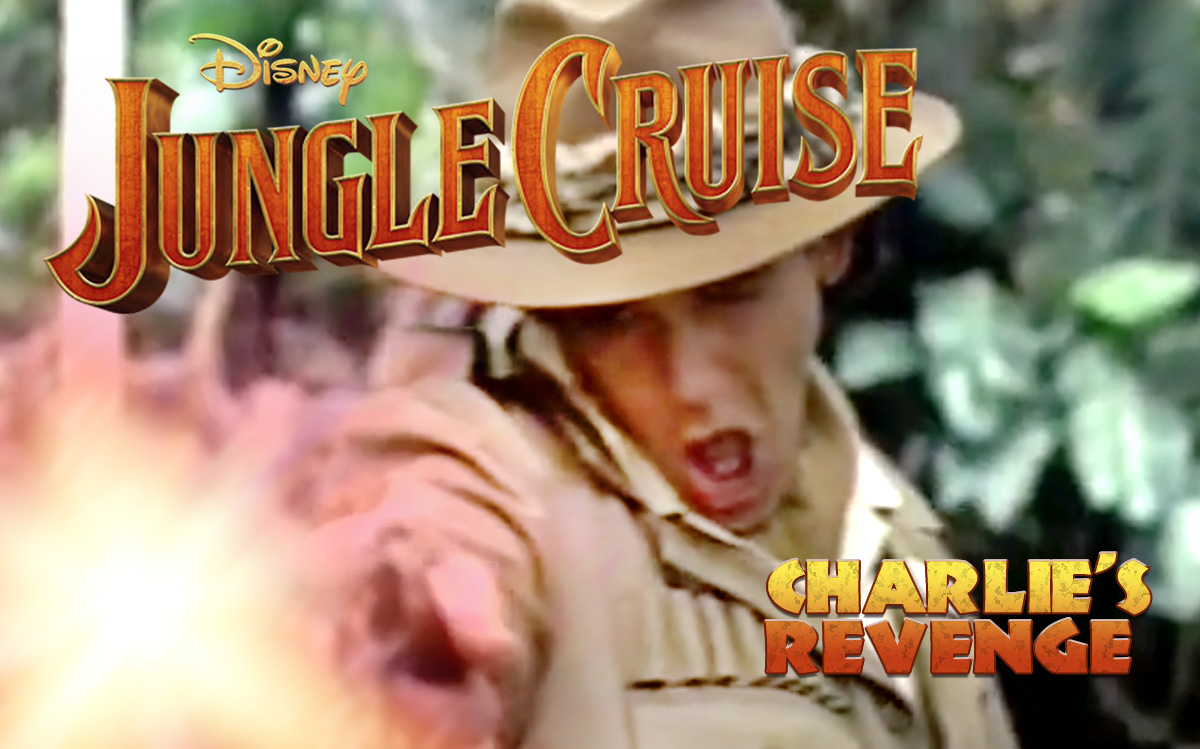 The following is a true story.

Southern California was enjoying another sunny afternoon under a cloudless sky; the perfection was almost mundane. It was mid-summer 1990; Disney’s original park was celebrating its 35th anniversary, a major milestone for the company. Disneyland was abuzz with guests; Adventureland in particular seemed to vibrate with excitement and intrigue. Nearby happy throngs indulged in sweet treats unaware of the surrealistic ordeal soon to unfold.

A new yet oddly familiar cast member stood at the bow of The Jungle Cruise boat. He introduced himself as “Coconut Charlie” running through some puns typical of the attraction. After a bit of playful interaction with guests the boat departed the dock; the nightmare had just begun.

Charlie seemed a bit odd, not quite sticking to the script and a tad eccentric. Nonetheless his crew of guests was happy to be onboard and excited for the ride. As the boat approached the crocodile scene the skipper gleefully encouraged an older guest to reach out and touch the animatronic reptile. Complying with the demand the guest stretched towards the water, even standing on the bench and hanging totally out of the boat to do so. Charlie barked orders at him with an increasingly fevered pitch, demanding that he extend “just a little further” until the guest finally lost his footing and tumbled headfirst into the river!

The boat erupted into a panic. The man failed to re-surface from below the water and some swore they saw a severed arm clutched in the maw of a croc. Charlie made no effort to stop, no effort to help, no effort to reassure. Rather he chuckled quietly to himself and pressed on.

Now passing into the cobra scene Charlie continued to joke but guests were not laughing. Most sat silently stunned, perhaps a child could be heard softly weeping in the back. Suddenly a woman struggled, clutching her neck as though being constricted by a serpent. She wore a mask of fear, her face contorted in a grave grimace. In the confusion it was unclear what was happening; soon she too flailed overboard not to be heard from again.

Terrified passengers begged and pleaded with the skipper only to be admonished and ordered quiet. Charlie was completely unhinged now and out of control; the surviving tourists were helpless. Now Charlie intentionally miss-timed the elephant scene hammering the boat with a high-pressure hose of water. Charlie cackled with glee and yet was only beginning his sadistic torment.

Not satisfied the demented skipper headed straight for Schweitzer Falls running the boat directly under the torrent. The passengers were drenched and now seething with anger yet also paralyzed with fear.

As the boat crept into the hippo pool no one could have anticipated the horror that lay ahead, even on this crazed cruise. Charlie cautioned that the hippos might charge proceeding to un-holster his weapon. He fired six shots into the synthetic creatures but he was not finished. Six more rounds were discharged as Charlie next aimed for the “natives” along the shore. Terrified guests jumped and fell overboard. At least half a dozen passengers plunged into the leaden riverway, some could not swim, and others simply gasped for air as the boat left them behind.

With only a handful of people left onboard Charlie saved his most disgraceful deed for last. Brandishing his pistol once again Charlie shot eleven rounds, despite not reloading, directly into the boat targeting the guests themselves! Now, with no other choice, all but one of the remaining crew abandoned ship into the murky waters.

Finally arriving back at the dock, the lone survivor, a man named Tony, was removed from the boat and Charlie was presumably arrested and jailed. It was an unfathomable act of malice yet one that you may have not heard of. More shocking still is that these heinous crimes were captured on film and televised as part of the Disneyland 35thAnniversary television special.

Welcome to the most bizarre and yet fantastic Disney TV show ever produced!

1990 was nearing a pinnacle for the Walt Disney Company. Disney had revitalized the animation unit, now riding high on the success of The Little Mermaid and the soon to be released Beauty and the Beast. The Disney-MGM Studios Theme Park had recently opened in Florida. New hotels such as the Grand Floridian and Beach Club Resort debuted kicking off a huge slate of expansions on both coasts. Disney’s live-action movies had reached unprecedented heights and were now releasing significant and relevant films for the first time in decades.

Who Framed Roger Rabbit, one of the newly released films, was a huge hit. Comedian Charles Fleischer voiced Roger Rabbit. In a typical act of Disney’s beloved “synergy” Mr. Fleischer played the role of our jungle guide Coconut Charlie as well as several other roles throughout the show. The Hollywood connections did not stop there.

Airing on NBC (this is before Disney owned ABC) “Disneyland’s 35th Anniversary Celebration” commenced on the set of Cheers, then at the height of its popularity. Norm and Cliff sat in their usual spots at the end of the bar as they watch a brisk bout of female mud wrestling! It’s a classic match between “The Amazon Queen” and “The Masked Bimbo”, Frasier is concerned that he may have missed his favorite: “The Leather Queen”. We are seconds into a Disney special celebrating the anniversary of America’s favorite family fun-park and the main topic of discussion revolves around “Bimbos” and “scantily clad women rolling around in the mud”. Hold on tight folks, this is not your grandfather’s Disney special!

Woody tries to convince the gang to change channels over to the Disneyland special; Cliff and Norm go along with the idea based mainly on the suggestion that Cinderella and Ariel are hot. George Wendt who plays Norm was 42 years old at the time; does it seem odd that he is sexually attracted to a teenage cartoon mermaid? More disturbing still is that Cliff settles on Lady from Lady and the Tramp as being his ideal Disney girl, despite being a dog. Weird.

Moving past the bondage and bestiality the show presents a bizarre, almost hallucinogenic, series of vignettes based within the park. Woody recounts his first visit to Disneyland and how a young girl, who we later learn was a phantom, seduced him on the Haunted Mansion. This is when we first meet Charles Fleischer, now playing a mansion host.

Moments later Ronald Reagan re-dedicates the park as he helped to do on opening day in 1955. Abruptly the show switches into a strange musical montage of politicians visiting Disneyland set to rollicking Caribbean steel drums for some unexplained reason.

Next Michael Eisner appears and introduces our host, the sole Jungle Cruise survivor, Tony Danza. Tony was an odd choice having no real connection to Disney and only a passing one to NBC but nonetheless he was well known at the time. This is when the Jungle Cruise sequence begins and also gives some insight to what makes this show unique.

Unlike past park specials, which were typically helmed by unknown TV directors, John Landis directed this show. Landis was a legitimate A-list comedic director with credits such as “National Lampoon’s Animal House”, “The Blues Brothers”, “An American Werewolf in London”, “Trading Places” and “Coming to America”. John created the breakthrough music video “Thriller” with Michel Jackson. He also directed the Disneyland 30th anniversary special though that was more traditional in nature.

Landis brought a filmmaker’s sensibility to the project opting to shoot all new cinematic footage foregoing any typical stock shots. He created scenarios for each segment that told little stories, even if they were often outlandish or even inappropriate. The days of aging celebrities such as Danny Kaye teetering through the park with children in hand was gone, replaced with a larger budget, better-known cast and actual narratives.

Soon Tony is back, now visiting Star Tours and chatting it up with C-3PO. He introduces us to the Muppets, set to be acquired by Disney at the time and hoped to be the next big thing. The acquisition fell apart with the untimely death of Jim Henson but that does not stop a prolonged Muppets sequence. Once again Charlie is featured, now with Miss Piggy and Gonzo. Miss Piggy sets a snare to capture Cinderella (don’t ask) while Gonzo attempts to “date outside his species”. Weird.

The special proceeds through a too long sequence starring Ernest (Jim Varney the “Hey Vern” guy who was popular at the time) before settling on a musical climax starring Will Smith. DJ Jazzy Jeff and the Fresh Prince get jiggy with a hip-hop version of “Supercalifragilisticexpialidocious”! Hold on for some peak Disney rap highlighting tracksuits, floppy hats, coordinated backup singers, MC Hammer pants, animated characters, 90’s fades, spontaneous street dancing, fanny packs and an all-around good time. The only thing missing is Charlie who mysteriously has vanished from the rest of the show. Weird.

After a jarringly quick wrap-up back at Cheers we are out.

It’s a crazy, zany, murderous hip-hop park party unlike any that had come before or after. It illustrates where the Walt Disney Company was at in the 1990’s; they were riding high on success, but striving to be “cool” and “hip”. They desperately wanted to leave behind their image as an out of touch, old-fashioned family friendly company.

This was the new Disney, a company willing to hire high-end talent and press boundaries a bit. This attitude was prevalent throughout the company at this time. At Disney-MGM Studios David Letterman warned guests to stay in line or else they would “be beat up by guards in giant rat suits”. Robin Williams became their go-to guy, encouraged to joke about anything that popped into his head. Disney wanted to be thought of as current and even a bit edgy.

Leaning on both classic attractions as well as newer properties the presentation managed to break out of the mold of past park specials. The Jungle Cruise sequence alone makes it the strangest and arguably the greatest Disney special ever aired!

Have you ever seen this? Do you remember when Disney was trying to be cool? Check out the special in its entirety below!