In this, the second part of our 28-part series entitled “The Crates of the Jungle Cruise,” we discuss the label of another crate that is lying off to the side on the Jungle Cruise exit dock.

Actually, there are only two crates of interest (crate #1 was discussed here), so I’m going to have to find something interesting to talk about in the other 26 parts of this series.  But the good news is that I’ve saved the best crate for last. 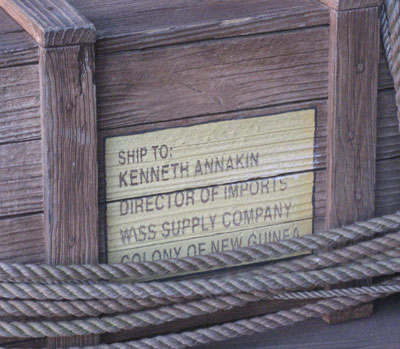 Here at last is a crate we can get behind, a crate to end all crates.  It’s much less cryptic of a joke than that Merlin Jones thing we saw before.  It is a tender, loving, beautiful reference to perhaps the greatest film of all time, Swiss Family Robinson.  (No, I’m not joking.  Have you seen it?  It’s flippin awesome. One of the truly great Disney films).

Ken Annakin was the director responsible for bringing this wonderful adventure to the screen.  Johann Wyss is the author of the book (by the way, the book is flippin awesome too).  New Guinea was the destination of the Robinson family in the movie, until they were permanently sidetracked by a shipwreck.  Fortunately, they found themselves on the most breathtaking island ever, and decided New Guinea sounded like a ghetto.

I cannot overstate how much I love the movie, which is why I really enjoyed finding this crate on the dock of the Jungle Cruise.  Knowing Disney’s propensity for violating my childhood (and George Lucas too, for that matter), I live in constant fear of two things:  1) That they will remake Swiss Family Robinson with Zack Efron, and 2) That they will let Tarzan move into my beloved Treehouse.  And then this crate will be all that’s left of the greatest Disney live-action movie ever.