What is it with Animal Kingdom and baby elephants?  I understand it’s a zoo, but AK has a non-stop infatuation with moving baby elephants around the park like chess pieces. 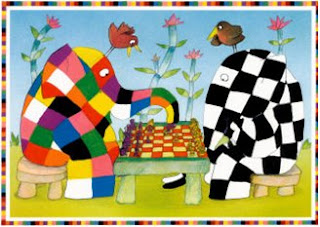 Sure enough, such a thing exists, proving that even when parkeologists are joking, they’re right.
It seems like one way or another, they’re always repositioning pachyderms.  Or getting rid of them entirely.  From Day One — actually before Day One — there was an elephant poaching storyline involving a dead elephant matriarch and an orphaned baby.  Dumbo on steroids stuff, with no happy magic feather to set things right. 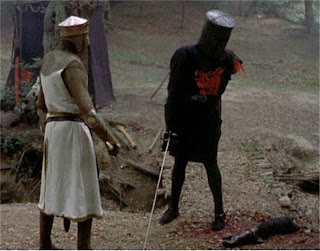 “Bah,” says the Black Knight.  “Big Red suffered only a flesh wound.”
Flesh wound?  Huh-uh.  Big Red was dead in the original storyline.  Finite.  Finished.  And if you think this is yet another in a long line of sick parkeology jokes, think again.  Would you belive me if I told you that Safari riders were treated to a vision of a dead elephant carcass?  You should.  It really happened.
And it was quickly corrected.
This storyline appeared in soft previews of the Safari, and was so disturbing that the ride was quickly retinkered for Opening Day.  In the new version, Big Red was merely wounded (stop gloating, Black Knight!) and her hideously maimed body was removed from the show altogether.  Little Red was recovered and we see him in the back of the truck at the end of the ride.  Parkeologists are hard at work recovering the lost remnants of this show element, but that’s for another time.
The question you should be asking is:  What ever happened to Colonel Hathi’s son? 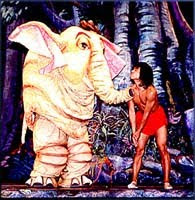 Hey, you know what would be even better?  Rollerblading monkeys!
Yes, the Jungle Book’s Dawn Patrol (including the baby elephant) was at Animal Kingdom on Opening Day, part of Journey Into Jungle Book, a show that once played in the Theater in the Wild (current home to Nemo).  It didn’t last very long, and those elephants were sent packing [Insert Jungle Cruise “trunk” joke here, or bad pun about “pachyderms”] to make way for the rockin’, rollerbladin’ version of Tarzan.
Or what about Triceratops Spin?  It’s dinosaurs, yes, but the ride itself is a variation of a Magic Kingdom classic, featuring baby elephants.
And occasionally you’ll spot new elephants out on the Safari.  One just appeared recently, in the form of a baby elephant named Luna. 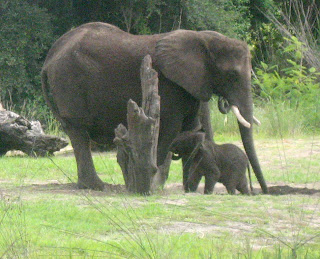 Hey, you know what would be even better?  Rollerblading monkeys!
She’s not the only one.  Over at Conservation Station Rafiki’s Planet Watch, the train station is graced with an elegant bronze statue of two baby elephants, trunks held high, ready to welcome you to a land of bug exhibits and veterinary tables. 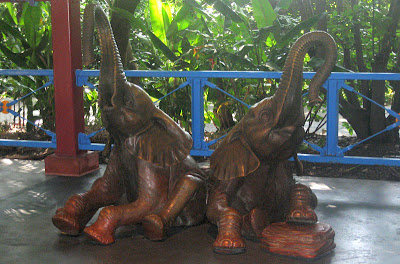 Let’s talk about this statue for a moment.  It seems perfectly natural for this part of the park to show you how these great beasts are cared for, how they are fed, treated, cleaned, and occasionally sent to the machine shop to have their gears refurbished.  But why baby elephants?
This statue used to be part of the Affection Section at Conservation Station, also known as “the petting zoo.”  And as everyone knows, kids like baby animals.  And goats, can’t have a petting zoo without goats.  But the bronze baby elephants were the first animals you encountered, and you got to do so in a very personal way.
One thing I know is that animals (and kids) are not very sanitary.  When you start mixing them together, and the petting begins, who knows what kind of germs are being spread?  That’s why it is required that all petting zoos have handwashing stations for you to use before and after your goat-stroking experience.
And Disney, being Disney, wasn’t content to have just an ordinary handwashing station.  No, you got to wash your hands beneath the snouts of Africa’s proudest mammal.  Remember in Jungle Cruise, where the elephants are always threatening to spray the boat?  Well, that really did happen at the Affection Section.
Of course, the elephants in the train station no longer dispense water.  They’re strictly for show.  But if you want to reveal their secret purpose, all it takes is some enterprising young parkeologist willing to lean down and try to peer up their trunks (warning!  Do not attempt up-trunk shots at Typhoon Lagoon!) 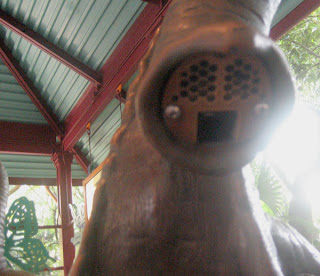