Nothing reminds you that you are at the Happiest Place On Earth like the sight of a bad-boy rock band playing thumb-kissy with a C-list actress and pretending to care about their fans.  As if we were fans of Aerosmith to begin with.  Okay, maybe we are.  At least I am. 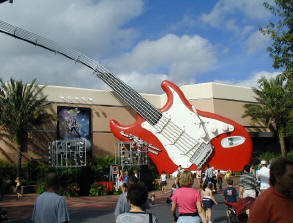 Fender is a type of guitar.  I call this shot “Fender Bender.”  Tee hee.
Rock-n-Rollercoaster comes from the Age of the Preshow, a period of theme park development spanning more than a decade, beginning with Tower of Terror’s Library and culminating in Mission:Space’s astronaut training corp.  These preshows are easy to recognize, as they fall into one of two categories, or sometimes both at once.
Something Goes Wrong
This was uber-popular during the time period.  The idea was that the audience was always entering the ride at the worst possible time (and no, I don’t mean right after Lights Motors Action just let out).  In this scenario, you find yourself paying for the mistakes of some clown who just couldn’t leave well enough alone.
It might be as benign as a rogue scientist trying to extract a giant lizard in the middle of a meteor shower, or as terrifying as the arrival of a Level 3 Prisoner.  But whatever the case, you knew that the next 5 minutes were going to be spent running for your life. 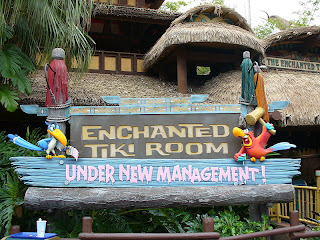 Can’t go much more wrong than that.
You Are Junior Trainees
In this scenario, the attraction attempts to cast you as some low-level employee of whatever imaginary organization is fronting the show building.  You might be Junior Astronauts, Junior Interplanetary Prison Guards, Junior Imagination Research Scientists, or even the lowest guys on the totem pole:  crash test dummies. 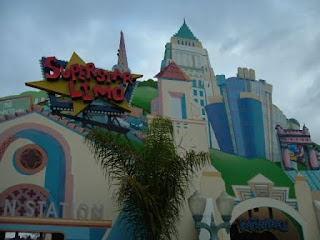 Oh, who are we kidding?  This is the lowest of the low.  You are Junior Hollywood Celebrities… Ugh.
Because you are at such a junior level, with no exposure to Level 3 Lock-Down procedures and virtually unproven at limo driving, the idiots in charge run around in full-scale meltdown mode, trying to compensate for your failures.
Amazing then, that in spite of all the chaos (and frankly, the repetitiveness) of the Age of the Preshow, Rock-n-Rollercoaster’s intro turned out to be pretty harmless.
Your goal is simple:  Catch a ride to Aerosmith’s next concert.  They’re going on ahead, because you know, they have to do mic check.  At least they’re nice enough to leave you in their recording studio.  You can see all their instruments scattered about.
In the early days of the attraction, there was actually a studio technician roaming around in the recording area, while the band stayed comfortably behind glass at the mixing board.  This technician was a Disney Cast Member (CM) who would pretend to straighten sheet music and dust the consoles, because trust me, you do not want to see Steven Tyler sneeze.  At one point, the CM was even given a very minor role to play.  As the rest of the band is filing out the door, lead guitarist Joe Perry leans over the mic and says “Chris, can you grab my black Les Paul?” And while you’re at it, can you grab my black les comb?
The live CM would nod to the video to indicate that he heard Joe, and proceed to pick up the black Les Paul (Les Paul is a type of guitar, for you non-musical types) and carry it out of the studio.  Neat, right?  It’s like Joe Perry is really there, barking out orders!
At some point, the bean counters must have realized that this little interaction between man and video was fooling no one.  And since it required a full day’s pay for somebody to stand in the preshow room and take that guitar in and out, the bit was cut.  The new backstory is that Joe Perry is a drug-addled imebecile who can’t see too good.  Maybe that’s more believable, I don’t know.
But there is one thing of note about this whole gag, something that gets lost now that the live CM is no longer there… Ever wonder why the tech’s name was Chris?
See, Rock-n-Rollercoaster is non-discriminatory attraction, and in some cultures, it’s believed that women know a little something about rock-n-roll too.  That technician fumbling around the with the prop guitar might be a dude, but it might just as easily be a chick.  And so rather than trust Joe Perry to nail two solid takes — one with a masculine name and one with a feminine name — they just went with the gender neutral “Chris.” 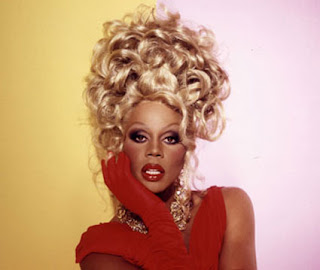 If you’re going to be ambiguous, why not just ask for a black RuPaul?
In fact, this sort of foresight is at play on many attractions.  You know how CM’s are always required to wear a nametag when on stage?  Well, what if you showed up for your shift and forgot it!
Rides like Kiliminjaro Safari have you covered.  They keep a couple spares on hand.  The names on the tags?  Chris and Pat.  No joke.
I think Julia Sweeney deserves some kickback here. 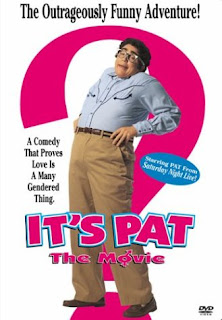