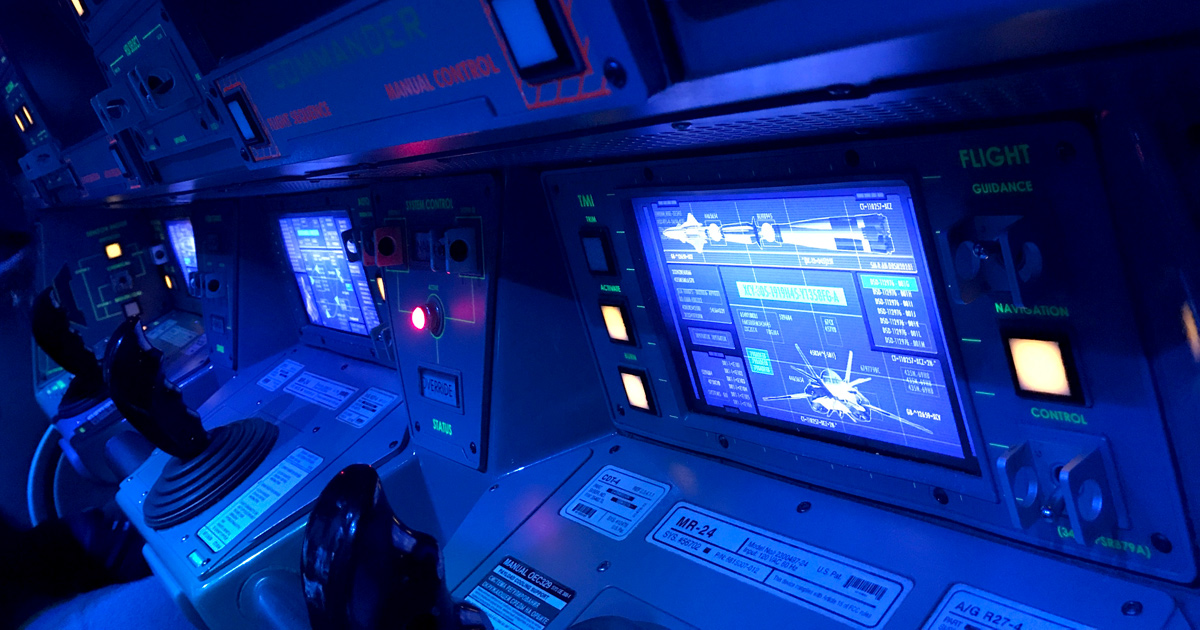 So much for the celebration.

We’ve had our eyes on the relaunched Mission SPACE for a few weeks — ever since everyone learned that Mission SPACE would receive an entirely new Earth mission to go along with its existing mission to Mars. Usually, Disney rumor mills are all over this kind of thing, but D23 was full of surprises.

Here are some snap judgments from the new ride.

At least in the delivery. Original CAPCOM Gary Sinise is gone, replaced by the new head of the Astronaut Training Corp, played by Gina Torres.

I’m not crazy about it. Judging by her line readings, neither is she.

Sinise’s performance was not as timeless as, say, all-time great Mr. Johnson’s from the Magic Kingdom’s Mission to Mars. But at least Sinise is a Best Supporting Actor nominee who was once a fake astronaut.

The script for most of the pre-show and all of the Mars Mission is identical to the original. It’s jarring to hear Torres speaking Sinise’s words. She’s just not that good at it. While she doesn’t flat out tank the narration like that “Uh Ooh” guy from the Flight of Passage preshow, all her dialogue comes across as flat and robotic.

It’s strange that in this age of personalized and randomized experiences, they didn’t keep the Gary Sinise version in play. Torres could have narrated just the Earth mission.

Or better yet, they could have randomized between Torres and Sinise for Mars, a la Star Tours 2.

Or best yet, hired the real Xena Warrior Princess as the narrator.

Take a Visit to … Earth

Besides the new narrator, the other big change is the Earth Mission itself.

It would be a stretch to call the original Mars mission a classic ride. Yet it had some energy. A zippy slingshot around the moon. That clever hypersleep trick. An asteroid field for an alarm clock. Landing under emergency manual control. And the last big thrill with the collapsing cliff.

By contrast, the Earth Mission is a snooze.

You launch, you fly around the Earth, you land. They still activate the manual control sticks during the landing, but you aren’t swooping through Martian canyons or careening towards a snowy runway. Instead, you basically park the thing into a safety net with all the drama of Drivers Ed.

The Earth Mission is only available to Green Team (less intense), which supposedly gave them the ability to lower the height requirement and get more toddlers into astronaut training. But when it comes to the motion effects, the original Green Team version of the Mars mission was about as intense as watching an episode of Xena Warrior Princess from the couch. One wonders why they couldn’t just keep a randomized Mars version for Green Team as well.

I guess they figure pre-schoolers won’t sit still unless it’s for pictures of dark continents.

Earth is obviously a brand new ride, but Disney has even retouched the Mars Mission, completely re-rendering the entire sequence. It looks light years better. Everything is crisp and detailed, especially in the asteroid belt and Mars landing scenes.

Apparently computer animation has improved in the last 14 years.

The Earth Mission is likewise fully rendered, but suffers because there’s not a whole lot to the story line. You’re basically hovering over the planet, watching glittering continents swing by below you, while the entire other half of the screen is the vastness of space.

They did a good job making it dark though.

A Call-out to Disney Parks Around the World?

I’m sure it’s just coincidence, but on the Earth Mission, if a country happens to host its own Disney park, a second-tier star of Xena Warrior Princess will call it out by name during the trip.

The pre-show confirms that you’re launching from Florida — home of Walt Disney World, duh. You traverse North America (also home to Disneyland) and according to the narrator, you leave the continent at San Francisco — home of the Walt Disney Family Museum.

The next thing our narrator recognizes is Hawaii, home to Disney’s Aulani Resort and Spa. And not long after, she calls out Japan, home to Tokyo Disneyland Resort.

After Japan comes China (Hong Kong Disneyland and Shanghai Disneyland). And further along, she specifically mentions Paris, the “City of Light.” I think there’s a Disneyland in Paris, but I forget what it’s called.

Of course, there are other regions named also, but I find it interesting that they managed to hit all of Disney’s real estate holdings.

How Does the Relaunched Mission SPACE Affect the Parkeology WDW49 / WDW47 Challenge?

If you’re not familiar with our world-famous challenge to ride every ride at Walt Disney World in a single day… why not? We created it years ago!

Since then, hundreds of people have attempted the challenge. And over the years, we’ve had to make alterations to the official ride count as Disney adds or removes rides.

We started the summer as WDW49 after Pandora opened. The closing of Universe of Energy and the Great Movie Ride — with a combined ride time of over one hour! — took two rides off the board.

Once we found out about the second Earth mission, we’ve been waiting until Disney relaunched Mission SPACE to see if would qualify as one or two rides. We can now make the call.

Therefore, we will continue to count Mission SPACE as one attraction, making the current challenge WDW47.