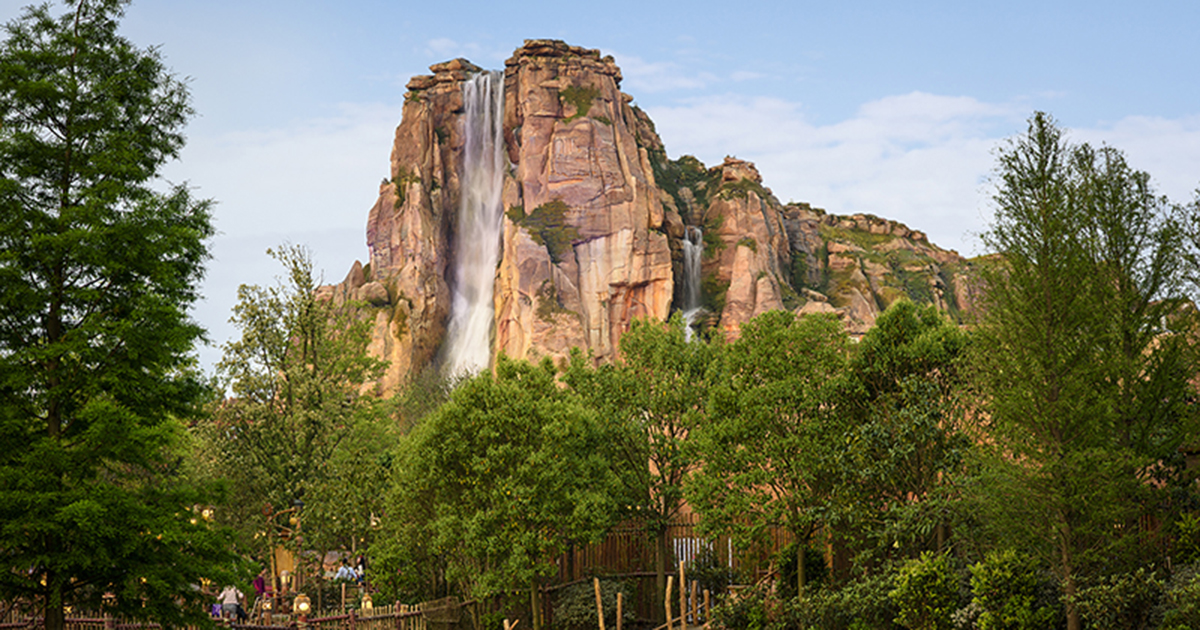 A few weeks back reader (and apparent The Black Hole super-fan) GREG called me out for being lazy. Yes GREG I read the comments and words hurt. GREG accused me of not pulling my weight around the Parkeology campus. Lets look at the facts GREG; my last post was in June, a mere six months ago. Since then I have been to both the Tokyo Disney Resort, and Shanghai Disneyland and all sorts of major Disney parks news has been released so, um, well, OK GREG, maybe you have a point.

Well just to placate GREG (man that guy complains a lot) today I will finally talk about our trip to Shanghai Disneyland. The problem is that frankly if you are reading this then you are big enough of a Disney fan to already know all about Shanghai Disneyland. You know that it was built very well. You know that it features a couple of absolutely jaw-dropping, state-of-the-art attractions that has everyone in the western hemisphere green with envy. You know that the castle is massive and full of stuff to do (a restaurant, a boutique, a walk through attraction and even the finale of a boat ride). You know that this no holds barred approach to building a park was last seen when Tokyo DisneySea premiered and has not been seen stateside since geez, I guess when EPCOT Center opened in 1982. You know that Disney was very careful to include lots of references to the Chinese culture including food options, architecture and even the basic design of the park layout. You know that there were (largely unfounded) worries about wild locals destroying the park grounds because culturally they were unaccustomed to the somewhat rigid rules of theme parks. And you know that you want to go there, badly, like on a deep lizard-brain level you know that you should see it before you die. Even GREG knows that Disney pulled out all the stops and as a fan there is a guttural, instinctual desire to visit. 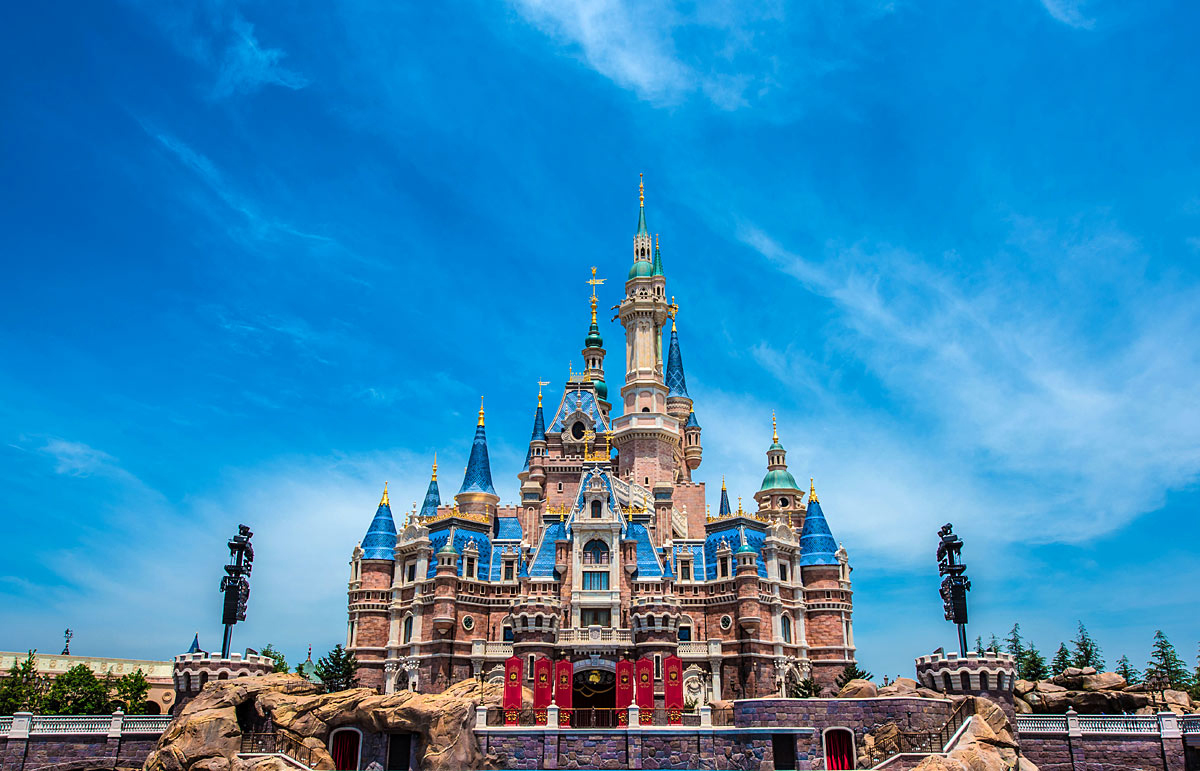 Its big, its full of stuff to do and its unique to Shanghai

But you know all of this. You know that Tron is the best coaster Disney has ever made. You know that the new version of Pirates of the Caribbean is unreal and overwhelming in its presentation. You already know that the raft ride there finally gets it right, that Disney now can honestly claim to have the best version of that ride available. You already have watched the videos of the newest (and best) version of Peter Pan’s Flight and you know how they maintained the old-school charm while simultaneously giving it a high tech kick in the pants.

You know that Disney built a couple of beautiful hotels and that the new version of a Disney themed shopping plaza works well situated right at the front step of the park.

Did you know that a population equivalent to the entirety of the United States lives within a three-hour drive of Shanghai Disneyland? You probably did. Did you know that as of November, just four months in, over four million people have already visited the park? This is a good sign and ahead of the pace needed to reach the lofty goal of ten million guests in year one. Huh GREG, did you know that?

So I don’t need to tell you stuff you (and Mr. know-it-all GREG) already knows. The bottom line is that Shanghai Disneyland is a wonderful park. It is built with obvious care and while already a fantastic place to visit will only grow more and more impressive over time. It is very large for a Magic Kingdom style park, In fact it in many ways does not feel like a traditional Magic Kingdom. There are elements that feel like Animal Kingdom (The Adventure Isle area of the park has the same worn, lived in vibe as Africa in Animal Kingdom). There are parts that feel like Tokyo DisneySea (the general level of detail, obviously large budgets and technology limit pushing of the ride systems). Of course there are parts that feel closer to the Magic Kingdoms you already know and love (They finally nailed Tomorrowland). It’s a great place and you should visit.

You all know that there were reports of the local Chinese descending on the park in hoards and doing all sorts of bizarre things ranging from urinating in the streets to trampling landscaping. I can tell you that this is virtually all fiction. I have seen much worse guest behavior at the U.S. parks and especially in Disneyland Paris where I have witnessed more or less pandemonium breaking loose during parades or other crowded times. Sure, the Chinese will need to get accustomed to the structure of this type of park and yes, there are one or two crowd control issues that Disney still needs to work out, but as a general rule the local guest population is not so different then the guests here in the U.S. parks. They are certainly not the rigid rule following, line queuing, orderly and polite guests of the Japanese parks but neither are they wild unruly hordes of savages. They are normal people having fun and spending time with their families. The one consistent problem we observed was that the idea of waiting in line in China is different then it is here. It would be quite common for one party member to stand in line and then once close to the load area of a ride have the rest of their party try and push from the back of the line to meet up with them up front. This is not great. As a westerner it bugged me every time it happened. The Chinese did not seem bothered at all; it was normal protocol for them. It was not rampant but it did happen several times and I think Disney will try to prevent this from happening as much as possible. But you already know that Disney will and already has instituted new operation changes in reaction to shortcomings they notice during the first few months. This is normal, this happens with all new parks, you know that. 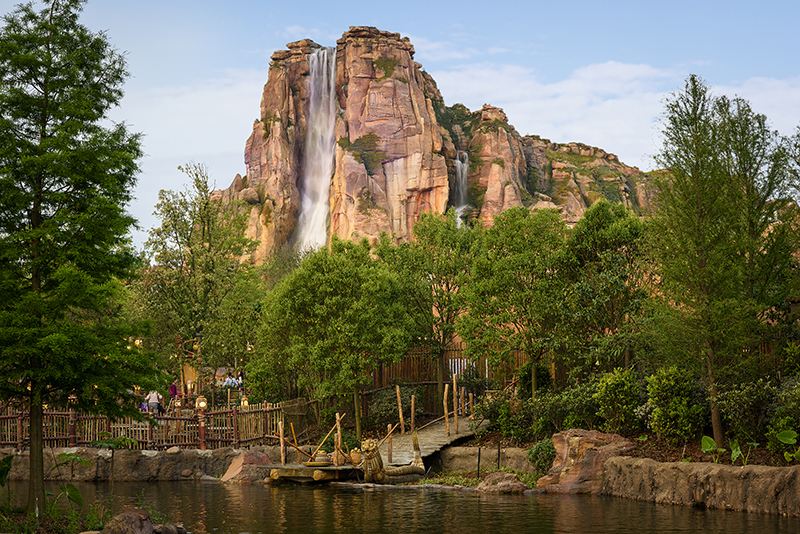 But here is a small story that you do not know, a simple occurrence that happened to me while at Shanghai Disneyland:

At “Camp Discovery” (part of the Adventureland-like Adventure Isle) guests are strapped into safety harnesses and sent on surprisingly thrilling quests over and through all sorts of obstacles. There are rocky cliffs and boulders to tread over, dark caverns to roam, winding paths to explore and thundering waterfalls to navigate. 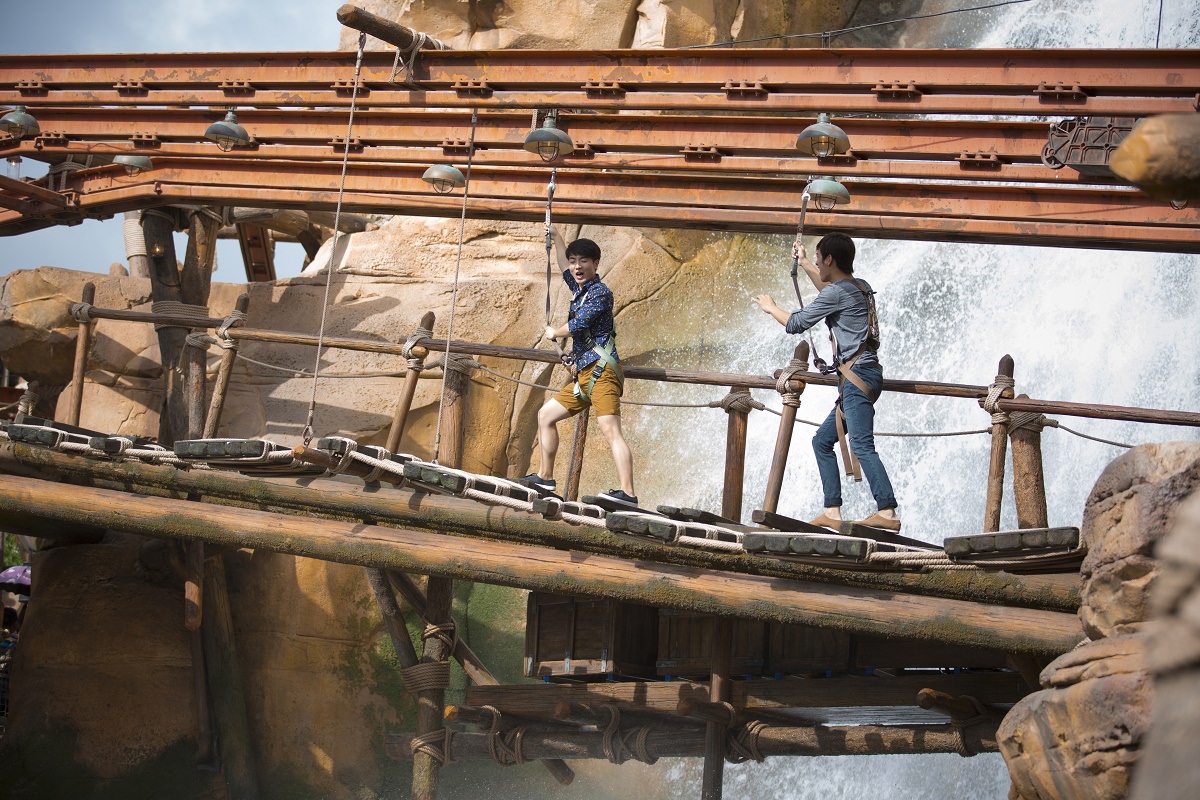 The obsticals can be surprisingly difficult, some are single ropes and nothing more

There I bonded with a stranger, a man I had never seen before in my life, a man who does not speak the same language as I do, a man I will never see again. Yet for a moment we were the same, we smiled at each other and we laughed. This man from China, and me from the U S of A found ourselves dangling over a gaping ravine while traversing a very shaky rope bridge past a huge roaring waterfall with our kids in tow.

This was a scene straight out of an Indiana Jones movie therefore I was audibly humming the famous John Williams score from Raiders of the Lost Arc the greatest of all Adventure movies. Imagining myself in Indy’s shoes I inched slowly across the single swaying rope. Off to my right I heard a similar tune. I glanced over to see this Chinese man lurching across a rope of his own while gleefully singing along with me. We locked eyes, smiled and sang the Indy march together as we completed our trek and jointly made it safely over the rushing waters below. I held out my hand and he high fived me before we went our separate ways, a reminder that illustrates no matter how different we are we are actually much more the same. This is Shanghai Disneyland and this proves that fun knows no language, but you already knew that.

Our overall trip was fantastic, I certainly will return and I look forward to much of the technology and new experiences from Shanghai Disneyland filtering their way to the U.S. parks soon (I am guessing that the new Star Wars attractions will be using some of it for sure). As for GREG, well my friend I am sorry to report that there is no The Black Hole attraction in Shanghai, I am pretty sure that you already knew that.