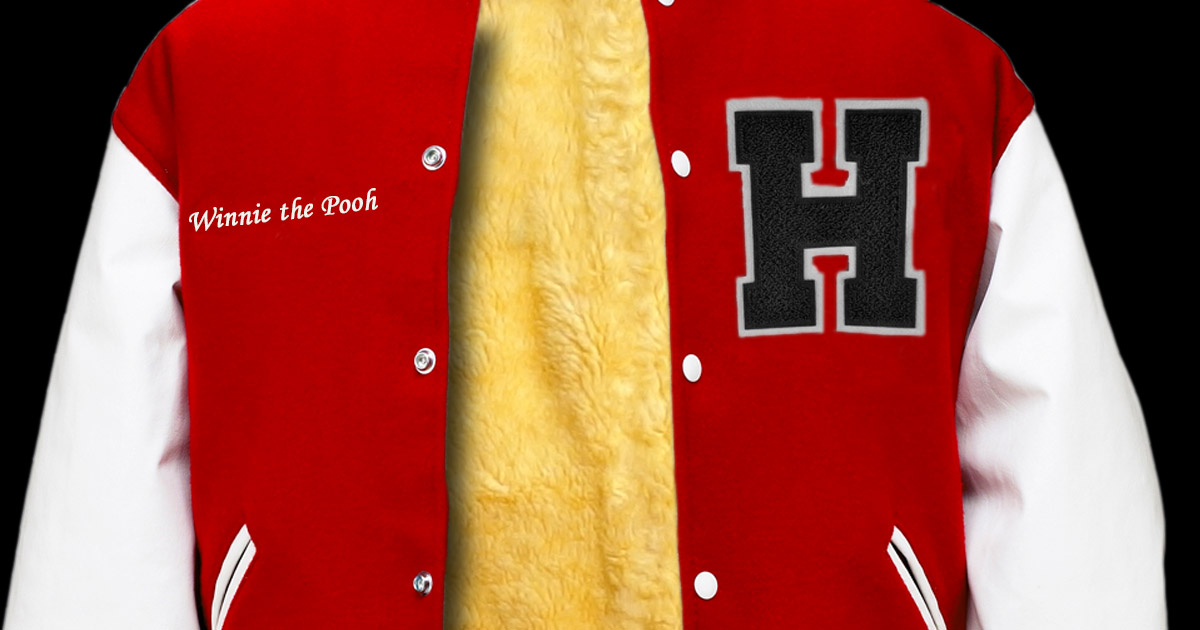 My nostalgic mood lasted all of thirty seconds. I had no sooner parked the rental car and walked through the door of the Hundred Acre Wood gymnasium when I was immediately tackled to the ground by Tigger.

I heard something rip in my $1500 suit as I went flying into the bleachers. I hoped it wasn’t the pants. I didn’t want to relive high school with my butt hanging out. I also couldn’t breathe. Tigger was sitting on my chest, that big chin in my face. He called me buddy boy and gave me a noogie. Then he let me stand up.

I don’t know why I decided to go my high school reunion. I suppose because it was a milestone year. The big four-oh.

No, I don’t think I’m special just because I’m the one who left town. I guess you could say I’m successful. I have my own firm in the city — Robin Robin and Associates. Yes, my wife is famous fashion designer Rita Robin. Yes, I have a talented son, Chris Jr., following in my footsteps. It doesn’t make me better than anyone else.

I had thought it might be fun to go back to Hundred Acre Wood High and see the old gang. But Tigger had killed the mood.

My face was burning with anger and embarrassment, but I tried to play it off. I introduced Tigger to Rita and told him what she does for a living. But he just growled something rude. Only he said it in the third person.

I thought that was an understatement, given the striped ensemble he was wearing.

I asked him the usual. Married? Kids? Once he started talking about himself, it seemed he would never stop. He wanted to relive every accomplishment from the glory days, taking us on a trip around the gym, recounting stories from his time as the top rebounder on the Hundred Acre Wood basketball team. He still holds the school record. I know because he showed us his name on a plaque. Twice. 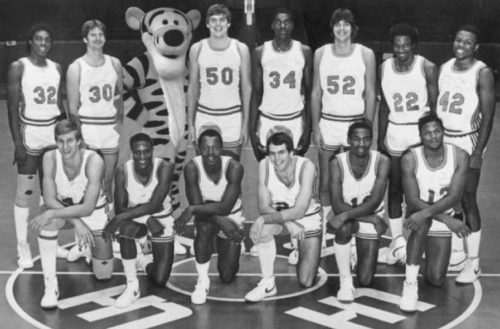 We were only a half hour into the evening and already I was exhausted. Feigning thirstiness from the long flight, Rita and I excused ourselves and headed to the bar.

As I sipped my drink, the guy on the stool next to me offered up his long-winded opinion about why my drink was wrong. And why his was a better choice. And why the current political administration had screwed everything up for the entire beverage industry. I let him ramble for five minutes before realizing I knew him.

It was none other than Owl.

Once again I introduced Rita, glad that at least this time my old high school chum wasn’t sitting on me like a rodeo clown. At first Owl appeared interested in Rita’s work, but it soon devolved into another lecture — this time with my former acquaintance lecturing my award-winning wife about the pitfalls of the fashion industry. He offered her his services, should she ever need some new ideas.

I made a remark about needing to find the restroom and slipped away from the bar. I don’t think Owl even noticed. He had changed subjects by that point, waxing loquaciously about some other inane topic. Sure, we had hung out as kids, but it’s not like he was my best friend. That honor belonged to someone else.

The restroom was really just the boys’ locker room. It felt strange, entering that childhood sanctuary dressed in the trappings of adulthood. It had that familiar smell of high school. Bacterial spray and urinal cakes and the lingering ghost of a thousand P.E. classes. A haunted scent, but not altogether unpleasant. It reminded me of why I was here.

I took the opportunity to check out my suit jacket. Sure enough, there was a big gash in the shoulder. I was smoothing out some of the popped threads when I heard a toilet flush behind me and a guy came out of the stall. He quickly crossed over to a sink as far away from me as he could. I watched him pump what had to be a gallon of hand soap into his cupped palms. He somehow managed to turn the faucet on with his elbows and commenced to scrubbing, like a doctor prepping for surgery.

“Christopher,” he said nervously. Then went back to scrubbing.

I went back to working on the suit. By folding the collar, I was able to cover up the worst of the damage. All the while I could hear Rabbit’s nervous sloshing as he scraped every last germ off his forearms. The janitorial scent in the air put a tickle in my nose. When I let out an abrupt sneeze, Rabbit almost leaped into the shower in alarm.

I tried to disarm him with a laugh, but he just glared and began gathering a bouquet of paper towels out of the dispenser. Then he made for the exit — careful not to pass within coughing distance. Using the paper towels as protection against the bacterial fungus that surely grew across the pull handle, he somehow managed to get the door open without physically touching it and disappeared back to the party.

He had left the faucet running.

When I left the bathroom a minute later, I spotted Rita talking to another woman across the way. Kanga looked worn out, 15 years older than the rest of us. I walked up as she was telling my wife about the trailer park bingo on the other side of the Hundred Acre Wood. She played most weeknights, she was saying. Made $30 last week, she said.

When she learned that Rita was my wife, Kanga began strongly dropping hints that she and I were old flames. I later assured Rita that though we had been friends, Kanga was definitely not my type. She had a reputation. She got pregnant young and the rigors of being a single mother had obviously taken a toll. Her son Roo had bounced in and out of juvy before they finally sentenced him to ten-to-twelve for holding up the Hundred Acre Wood Convenience Mart. I always wondered who the father was. Back then, we had all thought maybe Tigger. The kid had a lot of his same spirit.

We had been at the party for an hour and I still hadn’t seen the one guy I was looking forward to seeing. I scanned the crowd.

And all at once, I wondered how I could have missed him.

Pooh had always been big, even as a kid. But when I spotted him holding court over by a buffet table of appetizers, I almost could not believe my eyes. He easily topped 400 pounds — a corpulent, jiggling monstrosity with a sallow complexion, stuffed into a red shirt that looked about to burst. He was putting away hunny chips by the handful. He roared when he saw me, his sticky voice echoing across the gym.

He held out his arms. I wondered if he would rush towards me and envelop me in a big bear hug, but where Pooh was concerned, there was no more rushing in life. He didn’t even bother to stand up from his electric scooter. Just waited for me to make my way over.

I shook his hand and he asked me if I had a little smackeral of something for him — then pounded me on the back as if it were the biggest joke. The Hundred Acre Wood was Hunny Central back when we were kids. We all had jars of it — crates of it — at our house. Just a little snack in case Pooh happened to wander over. To this day, I still can’t eat it. The smell of hunny makes me sick.

I may have been valedictorian of Hundred Acre Wood High, but Pooh was our class president. It was always about Pooh, I guess. My entire childhood. I loved him, yes, but at that moment, I suddenly realized that everything about my life today — the architectural firm, the perfect wife, the $1500 suits — they were all about getting out from under Pooh’s (substantial) shadow. It was my life story, and I wasn’t even the hero. All of us — Tigger, Rabbit, Piglet, Owl — we all gravitated to the enormous mass in the center of our universe.

He had always been a bear of very little brains, but at that moment a flicker of insight seemed to flash in his eyes. As if things in the Hundred Acre Wood had been stuck in a perpetual time warp ever since I left. And maybe it was my fault for leaving.

Or maybe I just read too much into things.

“Fine, Christopher, just fine,” said Pooh with a jolly, guttural laugh. “I’ve been holding down the fort. But it’s good to see you again.”

We made small talk but I couldn’t take it very long. The whole evening was more than I could bear. I hadn’t smoked in decades, but at that moment, I needed a cigarette something fierce. I think Rita saw what the reunion was doing to me. She smoothly diverted Pooh’s attention so I could escape.

I ducked out the back door to my old haunt by the dumpsters. I used to grab a quick drag here in between Chemistry and study hall. It seemed like only yesterday. Kanga and I had once made out back here after band practice. Maybe she was my type after all.

A noise in the dumpster startled me. The Hundred Acre Wood has its share of vagrants too. This fellow was disabled, missing his tail. Another proud member of the class of ’77.

“We missed you in there,” I said to Eeyore.

He just shook his head dolefully. “Nobody noticed,” he said.

There were scraps in there, tossed out from the school cafeteria. But somehow he came up with a half-empty bottle of something that could have been fermented. Sure smelled like it.

“Not dressed for it,” Eeyore replied. He shuffled out of the alley. I watched him go.

I was quiet the whole drive back to the airport. My wife seemed to understand that I wanted to be left alone. They say you can’t go home again. I don’t regret my time in the Hundred Acre Wood. It made me who I am. But when it came to my High School Reunion, that’s something I’d rather forget. I prefer to remember my friends the way they were, not the way they are now.

It wasn’t until the plane ride home that I realized I hadn’t run into Piglet.

When I got back to the city, I looked him up. I found him in a TV interview on YouTube. It turns out, I wasn’t the only one who left the Hundred Acre Wood. Piglet is now a financial wizard on Wall Street, married to a supermodel, and runs a charity for orphaned children on the side.

In the video, the reporter asks him about his childhood. He mentions that his 30-year-reunion is coming up.

“Any plans to attend?” the reporter asks.

“High school was miserable. Why would I want to go back?”