In honor of the Academy Awards, I have decided to devote an entire post linking the most famous American award show to a 43-square-mile patch of Florida swampland.

Here are the nominees and winners of the Oscars, Walt Disney World style.

Best Supporting Actress
The Great Movie Ride is packed with Supporting Actress nominees.  Of course, it showcases some of their more famous leading roles, but you can’t overlook someone like Sigourney Weaver.  She appears as an AA figure in the Alien segment, a movie in which she definitely was not a supporting actor.  Or what about Judy Garland, honored with a speaking-part AA in the Wizard of Oz segment (her nomination was for something else).  And then there’s Ingrid Bergman, the queen of the cinema.  Not nominated for Casablanca, but she also gets a speaking part as a robot in a Disney ride.  Career highlight indeed. 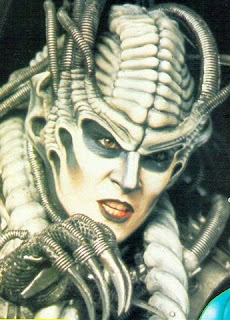 Maybe we’ll go in a different direction.  How about Angela Lansbury, nominated twice for Supporting Actress, but starring in her own stage show at Disney’s Hollywood Studios as a foam tea pot.  And she has a Magic Kingdom snack stand named after her character.  Come on, she’s the favorite, right?
But this is a park blog, and one nominee has had more park influence than any of the others listed above.  She starred in her very own attraction at EPCOT Center (alongside some puppets and a lesser-known pop star).  Angelica Huston may have won the Supporting Actress Oscar for Prizzi’s Honor, but it was her role as the Witch Queen in Captain EO that left its mark on the world.
Best Supporting Actor
Ed Wynn was nominated in 1959, but before that, he was the voice of the Mad Hatter, who happens to have his own spinning Tea Cup ride in the Magic Kingdom.  Because I never miss a chance to promote this attraction, two stars of the movie that inspired the Swiss Family Treehouse (John Mills and Sessue Hayakawa) were nominated for separate Supporting Actor awards (okay, not for Swiss Family Robinson.  They were robbed!).  Dan Aykroyd scored a nomination for Driving Miss Daisy, and he’s got his own restaurant at Downtown Disney.
If this was any other category, Gary Sinise might be walking away with the win.  He gets to run the pre-show for Mission: Space at Epcot, and that’s surely better than his turn as Lieutenant Dan in Forrest Gump.  But unfortunately, he’s up against a big-time player. 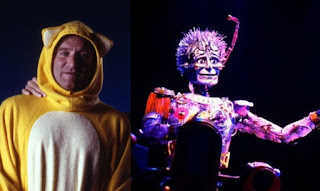 Robin Williams picked up the Best Supporting Actor award for Good Will Hunting.  And before that, he practically ran Walt Disney World all by himself.  His animated doppelganger, the Genie, pops up everywhere (even in the DisneyQuest) elevator, but he might be the only Oscar winner to host two separate attractions.  Unfortunately, neither of them are with us anymore, but Robin’s turn opposite Walter Cronkite in the Magic of Disney Animation was a wonder to behold.  Funny, touching, and magical.  He followed it up as the animatronic Timekeeper, whisking Magic Kingdom visitors into the past, present, and future.

James Baskett received an honorary Oscar for his portrayal of Uncle Remus in Song of the South.  This movie actually got a major E-Ticket log flume at the Magic Kingdom, but Uncle Remus, was nowhere to be found.

That leaves Walt Disney himself.  He famously received an honorary Oscar statuette and seven smaller ones for Snow White and the Seven Dwarfs.  Replicas of these are currently on view in the Magic of Disney Animation, and the movie itself has its own ride at the Magic Kingdom.  The ride is decidedly not Oscar material (but does have an awesome dancing frog). 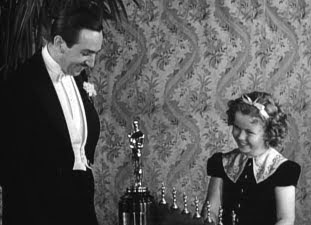 Oscar hosts are well-represented at Walt Disney World.  Steve Martin may have worked at the Magic Shop at Disneyland, but long time host Johnny Carson scored a segment of SuperStar Television back when Disney MGM Studios first opened.  Another major host, Bob Hope, gave the speech that opened the Contemporary Resort.

Will Rogers is a rare host with his own Audio Animatronic figure.  He hosted the Oscars in 1934, and landed a spot in the American Adventure nearly 50 years later. 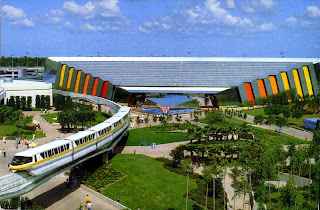 But with Chevy’s show now replaced by Drew Carrey (who has never before been mentioned in the same sentence as Oscar), only one host is left with her own attraction.  That would be Ellen Degeneres, who hosted in 2006.  Ellen’s Energy Adventure is still going strong in Future World.

This category is riddled with Disney songs.  Even when we focus on just the winners, the category is overflowing with park references everywhere you look, er, listen.  Under the Sea, Beauty and the Beast, and Can You Feel the Love Tonight still have their own show-stopping production numbers in various stage productions around property.  Colors of the Wind and You’ll Be In My Heart used to.  Chim Chim Cher-ee has its own segment in the Great Movie Ride, and Zip-A-Dee-Doo-Dah has a rollicking finale to Splash Mountain.  But When You Wish Upon A Star is something of a Disney anthem by now, and brightens the Magic Kingdom sky with fireworks every night.  It wins hands down. 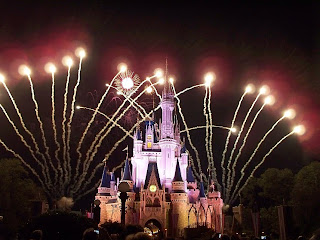 The camera loves Walt Disney World, but the choices for this award are surprisingly short.  I can’t even include a winner on the list.  I’m tempted to include Sunset Boulevard as a nominee, since it has its own land in Disney’s Hollywood Studios, but that really doesn’t have anything to do with the movie.  At first blush, Who Framed Roger Rabbit looks like most represented movie in the parks… until you reflect that Raiders of the Lost Ark was nominated also.  And while Roger may have his own ride at Disneyland, Indy gets his own massive stunt amphitheater. 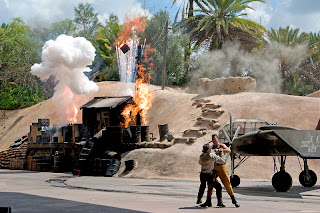 This category is loaded with actors who have appeared in prominent park attractions.  We’ve already touched on Robin Williams (Best Actor nod for Dead Poets’ Society), but what about the obligatory Great Movie Ride figures?  Seems like there’s a Best Actor in every scene.  James Cagney, followed by John Wayne, Clint Eastwood, Harrison Ford, and Humphrey Bogart (who really was nominated for Casablanca).

Here’s a weird one:  Tom Hulce.  He was nominated for Amadeus, but is better known to park fans as the voice of Quasimodo, who had his own Hunchback stage show in the Backlot theater.  And can we really ignore Tom Hanks, nominated a bunch of times and a two-time winner?  He voices Woody from Toy Story, and that means that the animated version of himself is all over the place, especially in the major attraction Toy Story Mania.

Nominee Johnny Depp’s performance as Jack Sparrow was so iconic, they added him to the classic Magic Kingdom attraction Pirates of the Caribbean.  He appears in three separate scenes in the ride, which means he has one more Audio Animatronic figure than he has Oscar nominations. 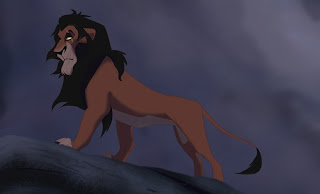 But one man stands apart.  Jeremy Irons is not only an Oscar winner, but he has influenced no less than three attractions.  His voicing of Scar in the Lion King gave rise to songs and characters that appear in Festival of the Lion King at Animal Kingdom (and the short-lived Lion King puppet show at the Magic Kingdom).  He played H.G. Wells in the Timekeeper Circle-Vision movie in Tomorrowland.  And he gave a memorable narration to Epcot’s Spaceship Earth.  He touched three separate parks, and ironically, none of them were the movie park.

Best Actress
Did you know that a 2-time Best Actress nominee once had a major presence at the Disney MGM Studios?  Bette Midler never won the big prize, but she got to dangle from a ledge on New York Street and descend down the fake Subway tunnel as part of the film The Lottery, the closing number to the walking portion of the Backlot Tour in MGM’s early years.  We’ve already talked about Sigourney Weaver, who got a Best Actress nod for Aliens.  And Ingrid Bergman was much more of a Best Actress than a Best Supporting Actress, picking up 7 nominations and 3 wins (none for Casablanca). 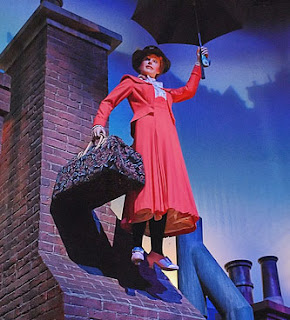 Dame Judi Dench voices the current narration for Spaceship Earth, and she’s a 4-time nominee for Best Actress (not to mention some supporting nominations).  Not too shabby there.
But the winner has to be Julie Andrews.  She was a 3-time nominee, but her win for Mary Poppins takes the cake as the premier Best Actress representation on property.  From a scene in the Great Movie Ride to character greeting areas in Epcot to the songs that permeate seemingly every park, Julie is the top of the mountain.
Best Picture
Now we come to the select few Best Picture nominees that have inspired the parks.  You already known some of the usual suspects.  The Wizard of Oz, Casablanca, and Mary Poppins all managed to find their way into the Great Movie Ride.  So did Raiders of the Lost Ark, in addition to its Epic Stunt Spectacular.
It’s A Wonderful Life was a Best Picture nominee, which translates very nicely into having a hole-in-the-wall Christmas shop at the Studios.  Beauty and the Beast is the lone animated film to be nominated (at least until Up this year), and though it is well represented in the parks, the fact that it only has a stage show and a snack bar suggests that it is quite underutilized. 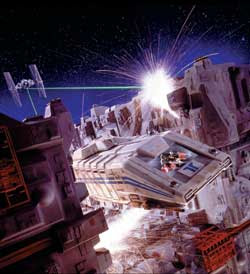 Yet Star Wars holds a special place of honor.  Indy’s Stunt Show may have a bigger physical footprint, but Star Tours is the more iconic attraction.  In spite of not actually winning the Academy Award, it’s hard to argue with the detail and imagination of the movie that inspired a whole genre of theme park rides.  A revolutionary attraction for its time, Star Tours continues to excite audiences today, and with Star Tours II on the horizons, we can look forward to its influence for a very long time.