It’s finally here.  The great Dinoland opus from friend and collaborator Teevtee.  The man who caught Joe Rohde baby-dunking.  It’s about time he got around to sending me something new rather than resting on his laurels.  I’ve been pestering him for days now.
Regardless of how you feel about Dinoland’s story (and I personally put it at the same level as such film masterpieces as Gigli), you can’t deny that they put a lot of thought into this.  Bad thought, maybe, but a LOT of thought…   Oh, alright, it’s not that bad.  Except Dinorama.
—————————–

I’m going to admit it, the back story of Dinoland USA at Disney’s Animal Kingdom is one convoluted mess.  I say this right up front because I don’t want to sound as though I am defending what is a crazy mash-up and 3 or 4 divergent ideas, all crammed into a blender and spun around on purée.  The back-story is in fact a likely victim of corporate interference — marketers asking creatives to do too much in too little time and space.  However, there is a back-story nonetheless.  And many visitors to Animal Kingdom miss the connective threads that attempt to tie the land together as a collective whole.
So what exactly is this story?  From the looks of it we have some sort of natural history museum that has secret time traveling experiments going on in the back room, a carnival with a couple of small scale rides and midway games, a kids play area, and some out buildings with a restaurant and shop… oh yeah, and a few gators to boot.  More recently they have added a stage show based on Finding Nemo but I am telling you right now that has nothing to do with anything.  It makes no sense whatsoever and does not fit in either thematically of physically with the rest of the land.  In fact we will simply ignore it.  The Finding Nemo show is technically in Dinoland USA but is really located off by itself on the way to Asia and should just be considered its own deal, not part of the rest of the land. 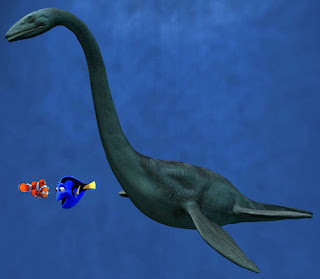 “I’m telling you, this is not the E.A.C.!”
As you can see it really is a hodge-podge of ideas but lets go back and try to explain the general concept of the land and see if we can make some sense of this.
Dinoland USA is set in “Diggs County” (Diggs… wink – wink, get it?) in an unnamed western U.S. plains state.  Think Montana. Diggs County is one of those off the beaten path places that Mom, Dad and their 2.5 kids would whizz past on the highway as they head off on the annual family vacation. For the better half of the last century it stood almost frozen in time as a one-light town used mostly for ranching and agriculture. In fact we can still see a small red barn (which now houses an ATM) and a few other signs of its past life.  We can also see an old gas station (which cleverly enough sold Sinclair gas which famously had a dinosaur as its logo) and what looks like an old lodge of some sort — all suitably run down and neglected.
The story goes that sometime in the late 1940s some interesting bones were found in the area.  Turns out that these bones were the tip of the iceberg and that a veritable mother load of paleontological treasures lay buried in these nondescript lands.  This kicked off a gold rush of sorts as scientists, grad students and a small army of researchers descended upon the area, all looking for the next big discovery. This is where we can see the first part of the concept come to shape.
Dinosaur research 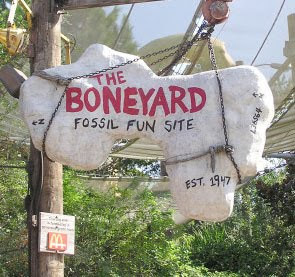 The most obvious sign of this is the “Dino Dig” kids playland. It is set up as an in-progress excavation of many different dinosaur bones.  Kids can uncover them, climb on and slide down them. What was once a local hunting and fishing lodge is now the base camp of the researchers and a social gather spot as well. The “Restaurantosaurus” housed within is really a treasure trove of fascinating details. There is the motor pool room to service their vehicles, a research library and so on.  Add in the actors strolling around playing the roles of paleontologists, students and the like and you quickly understand the theme.  So it’s simple enough then: Dinoland USA is meant to be a modern day dinosaur excavation area that has been ongoing for decades…. sort of.  There is more to this story
Big city museum moves in to exhibit newly found dinosaur treasures
So what is with this “Dino-Institute” anyway?  The building that houses the big “Dinosaur” attraction clearly is not something one would find in a backwater town way off the beaten path and is certainly not a run down 1940s farm building… so why is it here?  The story goes that as the researchers uncovered bigger and better examples of the dinosaur bones they were seeking, the Dino-Institute was built to show them off to a public clamoring to see more.  This is where the story starts to go off the track. We all know that people do in fact enjoy seeing reconstructed dinosaur skeletons and exhibits, but they do so in large museums in major cities.  Have you ever traveled to Wyoming or Montana to visit a large dinosaur museum built near an excavation site?  Well neither have I… but that is exactly the premise of the Dino-Institute.  The large-scale facility was created for tourists to get a first hand view of what they are doing out there — thus the rotunda with the full scale Carnotaurus skeleton.  Maybe however there is more than meets the eye. Maybe this was built as a cover for what is really going on here: secretive time travel missions taking time rovers 40,000,000 years into the past to observe real living dinosaurs up close and personal.  Frankly even this added twist makes little sense.  If someone wanted to keep these time travels secret the last thing they would do is build a museum right on top of it… oh well, remember I never said this back story made total sense, just that is existed. 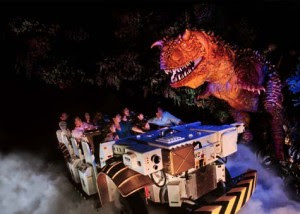 “License and registration, please.”
So clearly then Dinoland USA is about paleontologists coming to a small town, finding a major dig site and then somehow opening a museum to share its findings with the public… and simultaneously conduct secret missions through time.  But what about the locals? You see this small town was not vacant when the researchers / quantum physicists arrived.  There were people here and that leads to….
Off-the-wall locals set up support for the influx of researchers
The theory here goes that with all this interest in the local dinosaur skeleton population some of the long time local residents have shifted their businesses to cater to the needs of the newcomers.  Namely we have Chester and Hester, a husband and wife team that used to run a small gas station but converted it into a sort of general store for the research crew.  If you look at the shop named “Chester and Hester’s Dinosaur Treasures” you can clearly see that it was in fact a gas station at one time, pumps still standing outside and all. 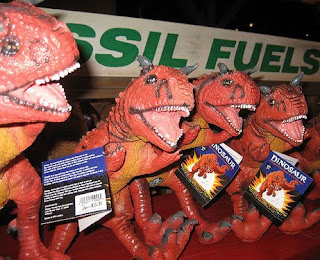 The original Dapper Dans in a harmonic rendition of “Good Bite, Ladies.”
Right now this store is sponsored by Mattel and oddly enough sells toys including Mr. Potato Heads that have nothing at all to do with paleontology or dinosaurs in general…. But this was not always the case.  Chester and Hester’s originally house an eclectic mix of all things dino related set in a general store.  It was a wonderful mix of silly toys, serious books, models and more… anything you could possibly imagine that was related to prehistoric beasts. The thought is that as Chester and Hester saw the population of Diggs County swell, they evolved right along with it, not wanting to become dinosaurs themselves. The location morphed from a gas station to a general store and finally settled on a tacky gift shop — the easiest way to make the highest mark ups. But in the real world Animal Kingdom felt the need to grow, and grow quickly… which brings us to:
The same off-the-wall locals continue to capitalize on tourists and build a roadside tourist trap
You see, apparently the Dino-Institute has become a worldwide draw. Tourists from across the globe have descended upon this sleepy backwater burgh representing pure profit to the hometown team.  So none other than Chester and Hester have decided to build a garish roadside attraction aiming to separate some of the naive visitors from their hard earned cash.  I’m not really sure how an elderly small town husband and wife proprietor of a two-tank gas station-turned-gift-shop can afford to fund such a lavish expansion, but hey, it was built before the credit crunch, maybe they got a home equity loan. 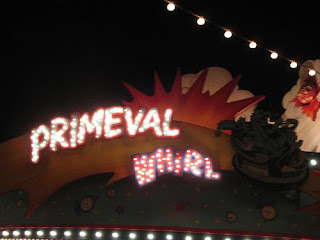 Trust me, it only gets worse.
Anyway, good old Chester and Hester have erected the “Dino-Rama” directly across the street from the shop.  They own some prime roadside land and what better place to build the ultimate tourist trap?  Everyone entering Diggs County must pass directly by Dino-Rama on the way to the Dino Institute, money waiting to be made.  This amusement park features a spinner ride (similar to Dumbo) and a small-scale roller coaster in addition to some midway games.  So apparently Dinoland U.S.A. is really about a kitschy roadside attraction set up to take advantage of tourists coming to the area to see some dino skeletons… but….
There are also some small exhibits featuring live alligators and other decedents from the prehistoric era 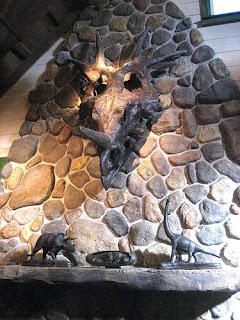 I’m not even going to try and guess how this works into the theme.  As far as I know, gators don’t live in Montana and I am sure they are here simply because someone at Disney felt that all areas of the park should have some sort of live animal element.  Maybe they should theme the gator area as part of Chester and Hester’s as if they opened a “Gatorland” type of attraction as well. As it stands, the live animals are really sort of just shoehorned in as an afterthought.
So then where does that leave us?  What is the story of Dinoland USA?  As I said from the get go, it is a crazy mixed up mess of multiple ideas. As concisely as possible the back-story is that as Diggs County grew due to its fortunate proximity to prehistoric treasures, the town and its residents evolved to both cater to and take advantage of the new visitors.  Serious science as well as silly entertainment is being done in this small town, all in the name of love for all things Dinosaur related.   Does it work?  Oddly enough for me it mostly does.  Theme parks are not reality; they are entertainment and not recreations.  They try to boil down the essence of a theme and create an environment that is fun and exciting.  Dinoland is actually full of some really wonderful details.  Just try not to make too much sense of it all.