For the first time, we are pleased to bring you a shocking parkeology-exclusive video.  This is hard-hitting, explosive material that you won’t find anywhere else, since it was captured by our own Teevtee, who also did the write-up.  The video is at the end of the article and it is indeed SHOCKING.

————————
It is not uncommon to have the operations side of Disney make changes to a park or attraction after it opens.  The demands of actually operating a park smoothly sometimes out weigh even the best intentions of the imagineers who designed and built them.  This may drive the original designers crazy but it is often unavoidable.
Case in point… fountains are not playgrounds.
Back in April of 1998 Disney’s Animal Kingdom threw open its gates to the eager masses.  This park was — and is — unique in the Disney canon, as it is really as much about exploring the details of the place as it is the rides themselves.  Nonetheless they did have rides and one of the biggest was Countdown to Extinction (later re-named Dinosaur).  Set in a museum-like building, Countdown to Extinction featured a beautiful fountain out front.  A life sized “bronze” styracosaurus measuring 24 feet long romped through the water, perpetually frozen in time… but did the imagineers expect children to join this prehistoric beast? 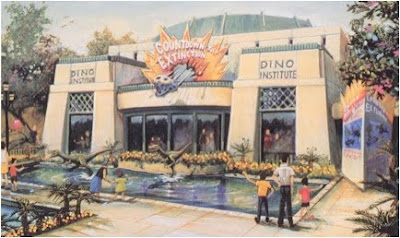 In this concept art we can see how low the original fountain design was, even lower than what was eventually built.  While the raptors were replaced with a styracosaurus surely the imagineers new that a design like this was asking for trouble.
You see, the fountain was very low, elevated maybe a foot of so.  There was no guardrail or barrier of any kind to prevent children (or perhaps obnoxious adults) from entering the fountain themselves.  This is precisely the type of situation that gives the operational people nightmares.  Suddenly you have soaking wet guests entering your big thrill ride and making a huge mess.  You have hygienic issues as water in a fountain is not chemically treated the same way as a pool.  You have legal issues as fountain waders might slip and fall… in short you have a headache. 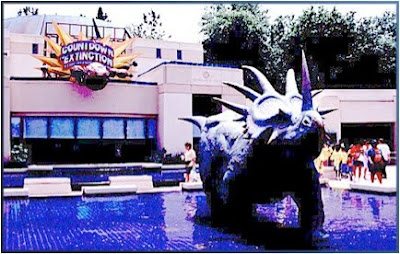 The original fountain design had no barrier separating guests (especially kids and babies) from the temptingly cool waters.
This issue was deemed a big enough problem that very shortly after the opening of the park the Countdown to Extinction fountain was closed off.  First it was drained, and then surrounded by large planters.  Eventually it was filled in completely and acted only as a planter overflowing with ferns. 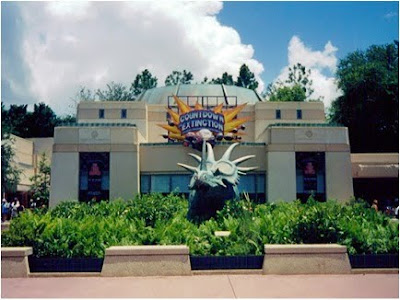 A jungle of unkempt plants somehow lacked the majesty of the original design, but it kept dirty diapers out of the water at least.
Finally the perimeter walls were raised, plants were added along the edges and water was allowed back into the newly buttressed configuration.  During this time the name was changed to Dinosaur to tie in with a then new Disney theatrical release and the styracosaurus was replaced with the less bronze-like iguanodon we see today. 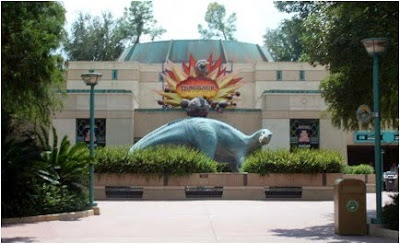 There is some water in there today, but you need to fight through a thick mass of ferns in order to see it. Notice how much higher the sidewall of the fountain is.
But the real question is, did the imagineers know that something like this might happen?  Were they intentionally leaving the fountain accessible for easy soaking / bathing access?  Did they ever consider that diaper clad babies may one day be dunked into a public fountain in plain view for all to see?
In this parkeology EXCLUSIVE video, we can now answer this question definitively.  Perhaps it should be called “Imagineers behaving badly”?