When you think of the absolute pinnacle of Disney themed lands, only one comes to mind:  Mickey’s Toontown Fair.  Alright I’m joking, nothing holds a candle to Dinorama.  But for all its cheapo judges tents and glorified kiddie coasters, occasionally Toontown Fair can surprise you with an actual detail or two.

Take this sign. (no, really, take it, please.  Har har.)  If you’ve ventured back into Toontown — or even if you just waited in line at the Tea Cups — you’ve seen it.  It marks the entrance to the land.  Quick, here’s a bit of trivia:  Which two Magic Kingdom lands don’t have entrance signs? Find the answer at the end of this post.  Anyway, back to the Toontown sign.  Nothing spectacular about it, right?  In fact, probably the most staid and boring of the themed signs.  Can you spot the Hidden Mickey?  If not, look under the straw hat and behind the Miss USA sash. 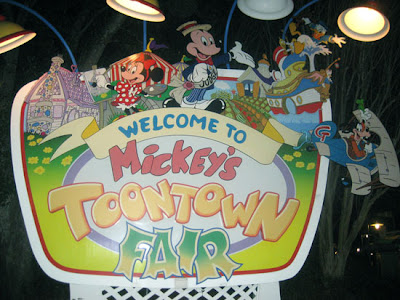 Now how many of you know about the other Toontown Fair sign?
Okay, the second sign isn’t all that big of a secret.  If you come by train, or if you’re addicted to nicotine, you’ve seen it too.  It’s back behind Mickey’s tent, next to the smoking area beside the train station.  The strangest thing about it is how out-of-the-way it is.  In fact, this area is one of the least trafficked spots in the entire park.  A fun little place to hang out, if you don’t mind the occasional smoking steam engine or cigarette. 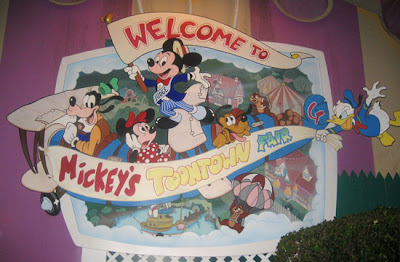 At first glance, it seems identical to the entrance sign.  In other words, they’re both pretty forgettable.  But they’re actually not the same sign at all (bet you had to look twice — I did).  Goofy in the plane, Mickey in his judicial gear, Donald acting angry.  You’ve seen it all before.  But there are some differences.  For instance, Pluto, Chip, and Dale were left off of the front sign.  Bet they feel slighted.
And it wasn’t until I actually looked closer that I noticed the buildings.
In the front sign, you have Minnie’s House on the left, and behind it the two tents.  On the right side, you have Donald’s Boat and Wise Acre Farms.  It isn’t immediately obvious, but this view is rendered from the same perspective of someone who is actually standing at the sign.  Minnie’s house on the left, Barnstormer and Donald’s Boat on the right.
Now look at the train station sign.  Same deal.  It’s from slightly above, but this time Mickey’s house is on the right, with the tents behind it, followed by Minnie’s house.  Donald’s Boat and Wise Acre Farms are on the left — exactly as they’d appear from the train station.
Maybe it’s just a tiny little detail, but it does confirm that at least something in Toontown Fair had some intentional thought behind it.
Oh, and the answer to the trivia question is Main Street U.S.A. and Fantasyland (which doesn’t really need a sign, since it has a freaking castle draped over the entrance).