We have a substitute parkeologist today, but I want you all to behave yourselves.  No spitballs or switching seats.  Especially since it’s my sister.  She’s usually found on her own blog writing clever homages to Jane Austen, but she’s crossed over today because, well, she’s musically inclined and her sharp eyes (ears?) caught this little inconsistency.  Enjoy!
———————-
One of my favorite was originally designed for a ski resort which never came to fruition. The Country Bears however were already adored by Walt and the Imagineers and thus it was inserted for opening day at Disney World. It fits very nicely in Frontierland, reminiscent of a “Grand Old Opry” kind of venue. There are portraits on the walls of the lobby and it has a very rustic appeal. Once you enter the theatre, you can’t help but be swept up in the good old country spirit of the show, “clappin’ your hands and stompin’ your feet.” The songs, which are mostly written especially for this show, are usually delightful and sometimes charmingly depressing. 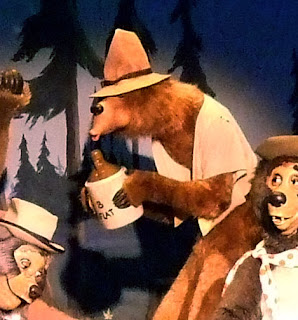 However, on your next visit, pay close attention to Ted of the Five Bear Rugs. When you listen to the song, “Bear Band Serenade,” Henry tells us that “Ted is on the cornjug.” He also informs us “The Bear Band Bears will play now, in the good ole key of G.” But Ted’s cornjug is marked B Flat. The song is clearly in a major key (which would indicate the jug should be B natural). Is this an oversight in the design, or a significant detail that says something about the professionalism and skill of the bears in the Band?

Whether it is oversight or intentional, it is not the worse for it. For most guests, the contradiction between the key and the markings on Ted’s jug will go unnoticed. And even for musicians, it may not stand out on the first or second visit (or even until years later, as I only noticed a couple months ago). The music contained within is fantastic, and I pity those who cannot bring themselves to clap (or stomp) along. So, if you’ve not been to the Jamboree in awhile…Y’all come back now, ya hear?